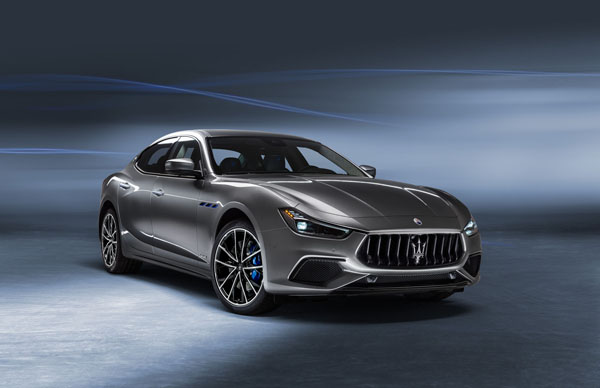 Maserati Ghibli Hybrid is the first electrified car from the Italian maker of high-performance sportscars. The company describes the Hybrid as, “the link between a past of internal combustion engines and an electric future.”

The underlying aim of the Hybrid version of the Ghibli is, “to enhance performance while saving fuel, being faster than diesel, and greener than petrol.”

Ghibli Hybrid is built around a modified version of the chassis and bodywork of the Ghibli V6. It combines a four-cylinder, 2.0-litre engine with a 48 volt Hybrid system that also enables energy to be recovered when slowing and braking.

The internal mechanical components of the 2.0-litre four-cylinder engine are derived from a FCA (Fiat Chrysler Automobiles) powerplant. It has been completely revised by the Maserati Innovation Lab in Modena to achieve greater torque and enable the turbocharger and e-booster to deliver more power.

The engine’s electronic control system is completely different, with a switch to a Bosch new-generation ECU. Maserati says that all that remains of the original engine are the dimensions and part of the cylinder head: it has been transformed into a true Maserati engine.

This version has an exclusive colour scheme, a stunningly brilliant, glittering Grigio Evoluzione.

Interestingly, the Hybrid weighs less than the six-cylinder engine equivalent, and has a better weight distribution because the engine is front- mounted and the battery is placed in the rear. This should make it even more agile and fun to drive. We will try to get hold of a test car and maker our comments on this.