Projecta has released a ‘Sure Brake’ Trailer Breakaway Kit, ensuring safety in a towing disconnection emergency. A requirement in all Australian states for trailers exceeding 2000kg gross trailer mass, must now be fitted with a breakaway system.

The safety device is designed that in the event of the trailer disconnecting while towing, it will activate its electric brakes and bring it to a stop.

The TBS700 Sure Brake has a durable, all-in-one case that houses its own 12V battery and charger and can be installed out of view, leaving only the plunger, lanyard and carabiner visible.

The battery case can be hard wired to the house battery of a caravan or boat, the tow vehicle alternator via the trailer plug. It can also be charged externally via its terminal posts on the front, ensuring its 12V 7Ah battery is always charged.

A test button allows for easy checking of battery status and there is a remote monitoring output wire for those who wish to install the battery case out of reach or monitor from the towing vehicle cabin.

For ease of installation the unit is pre-wired, has colour-coded inputs and outputs and comes with mounting screws. 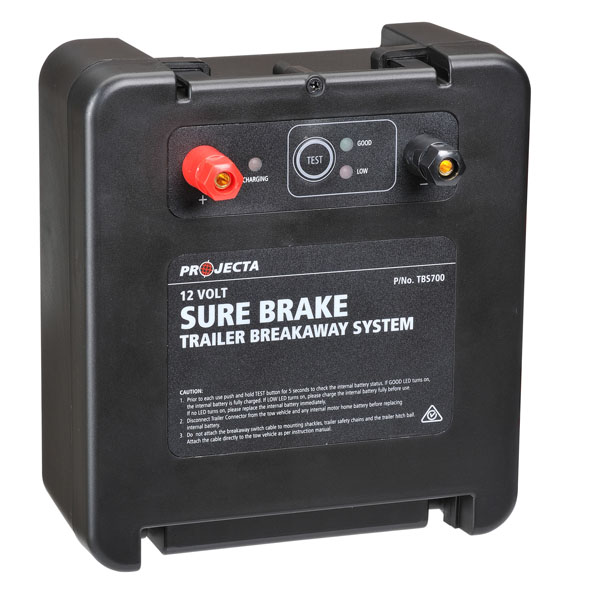 Jake Smith, Projecta’s marketing manager says, “Whilst smaller breakaway solutions are available, many of these systems tend to rely on external power such as the caravan house battery. If not sufficiently charged, users run the risk of these breakaway systems failing in an emergency.