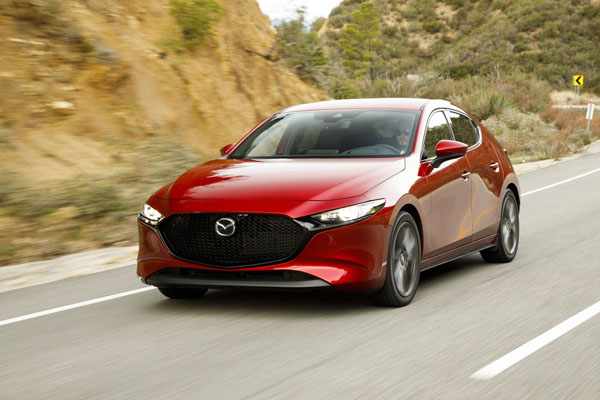 Mazda3 has been the number one seller in its class to private buyers in Australia for 10 years. And the importer is keen to maintain that tradition.

So important is the upcoming new car that Mazda brought a pair of pilot-build cars Downunder to give journalists a brief test drive.

In what initially seemed an improbable area the driving was done on and near the seafront in St Kilda, Melbourne. Wayne Watson, Mazda Australia’s Manager Engineering & Compliance rode in the passenger seat and explained these roads are considered to be some of the worst in any metro area in Australia.

Mazda is keen on pushing the ‘3 further upmarket in the affordable prestige segment and a considerable amount of work has been down to reduce NVH (noise, vibration, harshness) to give it a serene, peaceful interior.

The roads had sudden changes of surface, many dips and rises, filled-in potholes and an overabundance of speed bumps. New Mazda3 certainly feels at least one class up in size and price in the way it rides and the minimization of road, engine and wind noise.

I was certainly impressed, but will wait till I can test it in on the notoriously noisy concrete surface of the M1 between Brisbane and the Gold Coast before giving my final judgement.

As well as peace and quiet the Mazda3’s interior has also been lifted in the quality of materials and the interior design. Its understated style is very much to my taste.

A significantly amount of design has gone into the shaping of the seats to best match them to the human body. Again, there wasn’t sufficient time to test this in detail.

The ease of use of the controls visually and in their feel has long been of importance to Mazda. Not only from an aesthetic point of view but also to minimise the amount of time the driver needs to take their eyes off driving.

Our al-too-brief drive didn’t give us a chance to become fully accustomed to this, but we’ve spent a considerable amount of time, in Japan and Australia, with the Mazda specialists in this field and there’s no doubt they have made very good systems even better.

An eight-speaker audio system is installed in the lower grade models, with the topline variants gaining a 12-speaker Bose system.

New Mazda3 will be sold in four-door sedan and five-door hatch bodies. Cleverly there’s little in common between the two shapes as they only share two major parts. Mazda Australia is clearly aware their different buyers want individual styling. We really like the ultra-smooth fuss-free lines of both cars.

Engines initially will be revised versions of the current 2.0- and 2.5-litre four-cylinder units. Later in the year, possibly not till 2020, the fascinating new compression ignition petrol engine that’s been under development for several years will be added.

It’s aimed at being able to meet increasingly tough emission rules being introduced worldwide, but particularly in Europe over the next decade.