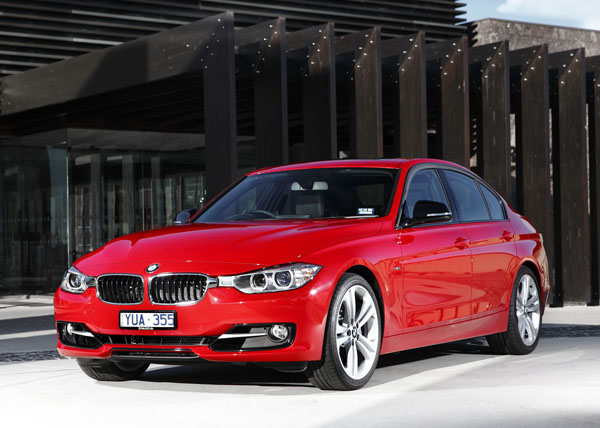 The BMW 3 Series is an upmarket small-medium German car. The sixth generation,
launched in Australia in February 2012, is noticeably larger than the models it superseded
and we start with it in this Checkout.

This is very much a driver’s car as rear-wheel drive gives you throttle control that’s lovely
to play with. The neutral feel through the steering is arguably the best feature of all BMWs.

BMW 3 Series sold as a four-door sedan, five-door hatch and five-door wagon. The latter
is named the Gran Tourismo or GT.

All BMWs come with responsive engines. Interestingly, there are times when the
stopwatch may tell you they are not as quick as your senses tells you, yet they still feel
great to sit behind, and that’s what matters.

Engine choice are many and varied, with three-, four- and six- cylinder petrols. There are
also four- and six-cylinder turbo-diesels.

With a profusion of 2.0-litre Twin Power four-cylinder engine choices, only the BMW 335i
has an in-line six-cylinder petrol engine. Every engine drives through an eight-speed
automatic transmission.

October 2015 saw the 3 Series get a facelift and tail tuck aimed at giving it a wider look.
The headlights were joined to the kidney grilles by an LED light bar. The headlights are full
LED as these give significantly more light and make for safer nighttime driving.

In 2016 there were major engine upgrades that added power and improved
responsiveness while reducing fuel consumption at the same time.

The 3 Series 330e petrol-electric hybrid joined the range in May 2016. A realistic range of
28 to 32 kilometres on electric power alone is fine for many who typically commute
moderate distances. Indeed, if you can charge it at home as well as when you’re at the
office you may go all week without using any petrol,

The hybrid can be charged from a standard electric powerpoint in about 3.5 hours, from a
dedicated BMW iWallbox in 2.25 hours, or at public charging stations. There is an ever-
increasing number of the latter in Australia and you may be able to do quite long trips
without using fossil fuels.

BMW ConnectedDrive Services has a SIM card built into the car which gives access to a
range of services independently of a smartphone. The Concierge Service will find points of
interest for you such as restaurants and hotels and can even make a reservation. The
BMW operative then sends information straight to the vehicle as a navigation destination,
together with all the contact data.

Service and repairs can also be expensive but servicing is according to the individual car’s
needs, not by according to a date on the calendar or the number of kilometres on the trip
meter.

Insurance can be pricey because keen drivers (who often don’t have talent they think they
possess) tend crash at times.

It pays to try to find a late-model BMW with a full-service history. You will probably be
asked to pay more, but it’s almost invariably worth the money.

WHAT TO LOOK FOR
Run your hand from side to side over the front tyres; more resistance in one direction than
the other probably means the car has been fanged.

Check the overall external condition of a 3 Series, in particular scrapes on wheel rims, the
left-front is usually the first to suffer, also look at the door edges for chips where they have
been opened against other cars (tut-tut!).

The complex nature of the later models in the 3 Series range means they should be
maintained only by specialised BMW technicians. Make sure to get a quote for even minor
items as the repair costs can be high.

Arrange to have the engine stone cold before you start it. Be sure it kicks over within a
couple of seconds and that’s there’s no hesitation under acceleration.

Previous crash repairs may mean the car has slightly mismatched colours, look for paint
overspray on unpainted surfaces, Ripples in the panels are also a sign the repairs.

A magnet will tell you if the material under the repaired area is metal or plastic filler.

Look for sun-induced fading on horizontal surfaces, a sign that a car has spent almost all
their time out in the open.

A few owners have told us of intermittent Bluetooth problems. Check the system is up to
date as BMW has made several revisions.

CAR BUYING TIP
Shop around in different areas as car prices can vary from area to area.

RECALLS: To browse recalls on all vehicles go to the ACCC at: 318i Luxury

Ewan Kennedy, a long-time car enthusiast, was Technical Research Librarian with the NRMA from 1970 until 1985. He worked part-time as a freelance motoring journalist from 1977 until 1985, when he took a full-time position as Technical Editor with Modern Motor magazine. Late in 1987 he left to set up a full-time business as a freelance motoring journalist. Ewan is an associate member of the Society of Automotive Engineers - International. An economy driving expert, he set the Guinness World Record for the greatest distance travelled in a standard road vehicle on a single fuel fill. He lists his hobbies as stage acting, travelling, boating and reading.
View all posts by Ewan Kennedy →
Tagged  3 Series., BMW.
Bookmark the permalink.