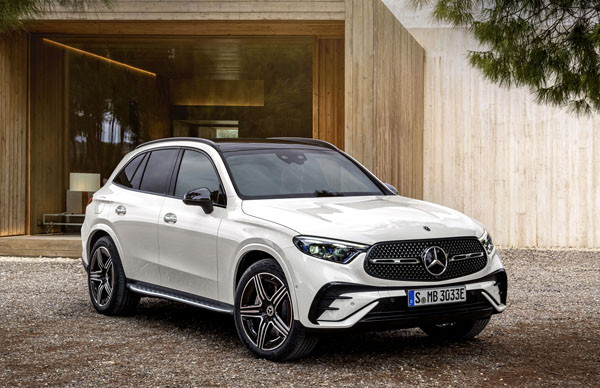 The new Mercedes GLC small SUV is designed for hybrid drive. The engine range has
four-cylinder petrol and diesel units combined with an electric motor.

All the plug-in hybrids have an electric range of more than 100 kilometres.

Noticeably more electric driving experience: thanks to the electric range, day-to-day
distances can usually be covered all-electrically. The improved hybrid driving mode
provides electric driving mode for the most appropriate sections of the route. Electric
driving is prioritised on longer journeys in urban areas, for example.

The GLC has significantly improved on and off-road attributes for adverse weather
conditions and stretches with unsealed roads. These include simplified operation using the
off-road screen, clearer information thanks to the “transparent bonnet” and very good
traction and handling safety by virtue of improved control systems.

New GLC offers optional rear-axle steering combined with a more direct steering ratio at
the front axle. The steering angle at the rear axle is up to 4.5 degrees. This reduces the
turning circle by 90 centimetres, to 10.9 metres. Which is pretty useful for getting into tight
spots in carparks. In shopping centres or under high-rise apartment buildings.

Styling sees the introduction of new headlamps which connect directly to the radiator grille
and accentuate the vehicle’s width. The grille has chrome surrounds on the standard
AVANTGARDE exterior.

Inside the dashboard is horizontally divided into two sections with a central display that
appears to float above it.

The drag coefficient of the new GLC is Cd is 0.29, which is two tenths better than its
predecessor (Cd of 0.31) which is a notable advance for an SUV with conventional drive.

The Mercedes-Benz GLC is said to have. “a pleasantly quiet vehicle with a refined sound
signature and very low road and wind noise”. This is something that we will comment on
when the new GLC reaches us in Australia and we borrow one for a road test.

The voice assistant “Hey Mercedes” has is even more capable of dialogue and learning.
The MBUX Smart Home function turns the GLC into a mobile control centre for the home.

The MBUX system fully integrates all the major music streaming providers, including
personal preferences and settings.

The optional Burmester(r) surround sound system offers an excellent listening experience
with 15 premium speakers and a total output of 710 watts.

Ewan Kennedy, a long-time car enthusiast, was Technical Research Librarian with the NRMA from 1970 until 1985. He worked part-time as a freelance motoring journalist from 1977 until 1985, when he took a full-time position as Technical Editor with Modern Motor magazine. Late in 1987 he left to set up a full-time business as a freelance motoring journalist. Ewan is an associate member of the Society of Automotive Engineers - International. An economy driving expert, he set the Guinness World Record for the greatest distance travelled in a standard road vehicle on a single fuel fill. He lists his hobbies as stage acting, travelling, boating and reading.
View all posts by Ewan Kennedy →
Tagged  GLC, hybrid, Mercedes-Benz.
Bookmark the permalink.