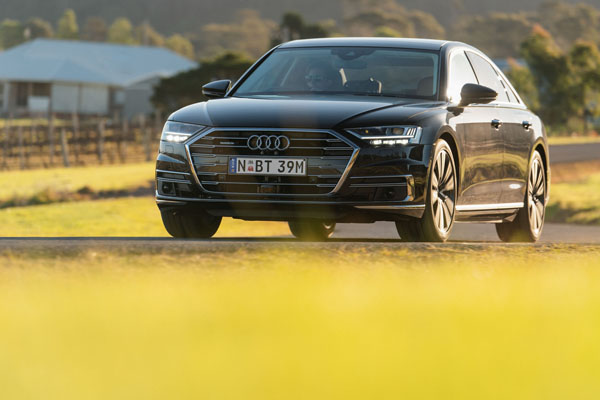 The fourth-generation of the Audi A8 flagship is a prestigious large saloon aimed at families who want to travel in luxury, or more often at business people who demand quality transport. History has shown that previous generation Audi A8 models are popular with limousine and hire car operators on the used car market.

New Audi nomenclature identifies models called 55 TFSI as petrols and 50 TDI as diesels. Other variants may follow later but in the meantime the big guns are leading the initial sales charge.

Our test car for the past week has been an Audi A8 50 TDI.

STYLING
The A8 is a handsome machine with relatively conservative lines and no over-the-top curved shapes that are unlikely to appeal to potential owners.

It’s sold in standard and long wheelbase format, with either four or five seats. The LWB is tagged as A8 L and is designed for business people who want not only comfort, but the ability to hold discussions in comfort.

The front displays a feeling of automotive purpose. It has the latest iteration of the Audi grille that has been very successful for more than a decade. It’s wider and deeper than ever before and ties in neatly with large LED lights. The sides have relatively subtle swages and the rear features slim full-width lights.

Wheelarches are large to cope with the high-performance tyres that can run for extended periods at very high speeds in their home country of Germany. 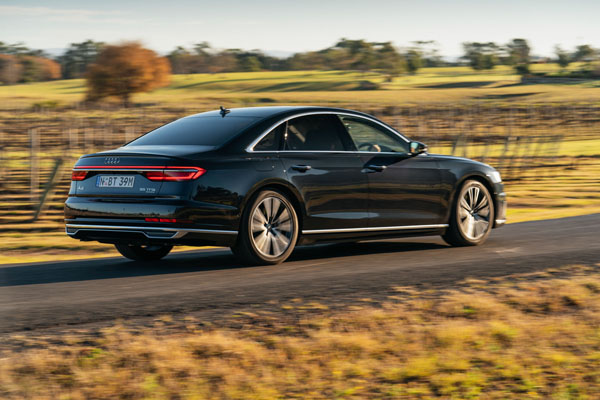 The interior is upmarket with high quality materials throughout. Audi cabin designs have been the envy of others for many years. The all-new A8 takes it one step further in design.

The dash is a model of simplicity. The main instruments are shrouded in a simple, but sporty, binnacle and are large and easy to read. Audi’s Visual Cockpit lets you choose the view in the binnacle.

The remainder of the dash is wide and uncluttered in a minimalistic approach that we really like. For example, the ventilation outlets are hidden until the ignition is turned on.

A mild hybrid system is used to recover energy when slowing, braking, or coasting downhill and reuse it to get back to speed and / or climb hills again. 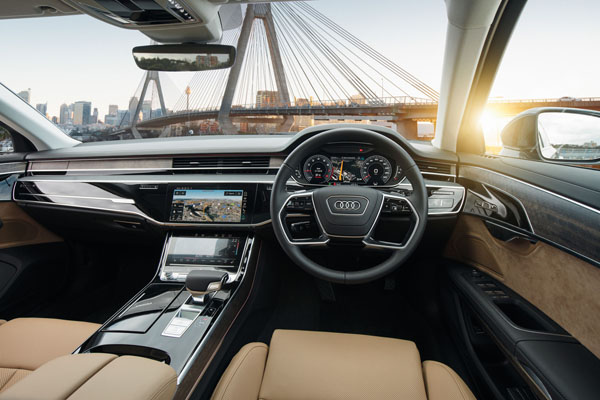 INFOTAINMENT
Dual touchscreen panels with diagonals of 10.1 and 8.6-inches sit below the centre of the dash and give access to just about every form of information or entertainment you could ever hope for.

The airbag count has been further bolstered by an industry-first centre airbag, which has been designed to prevent head clashes between front seat occupants.

DRIVING
The front seats are large and comfortable and can be adjusted in a mind-bending number of ways.

In the rear there is either a three-seat layout, with a definite emphasis on the two outer seats, or two wide seats with a large centre armrest. Again comfort is very good, and again you use your own adjustments.

Our road test began with a trip south from Audi in Brisbane to our office on the Gold Coast. Again we were reminded of the soporific 110 km/h speed limit we seem stuck with in most areas of Australia. This car really has been created for the 130 km/h speed limits in Europe which are more engaging and less tiring on the driver.

Of course, there are unrestricted speed zones on some German autobahnen, but sadly these are fewer ultra high speed areas every time we visit that country. And there are forecasts that Germany may fall into line with the 130 km/h countries.

The relaxed, peaceful feel is inside the big Audi saloon has to be experienced to be believed.

Winding roads are not really the strong point of any two-tonne car but the big Audi handled them with ease and felt smaller and lighter than it is. Mild rear-wheel steering certainly plays its part here, you don’t actually feel it helping – it simply does it without any fuss.

Rough roads were handled with ease but there were times when sound levels increased quite a bit. We’ve noticed this before in quite a few late model cars, possibly it’s a physiological thing after the near silence on smooth surfaces.

SUMMING UP
Audi’s new luxury saloons are set to make a mark for themselves in the rarefied air of this prestige class thanks not only to its style inside and out, but also for their advanced technology.

MODEL RANGE
Note: These prices do not include government or dealer delivery charges. Contact your local Audi dealer for drive-away prices.