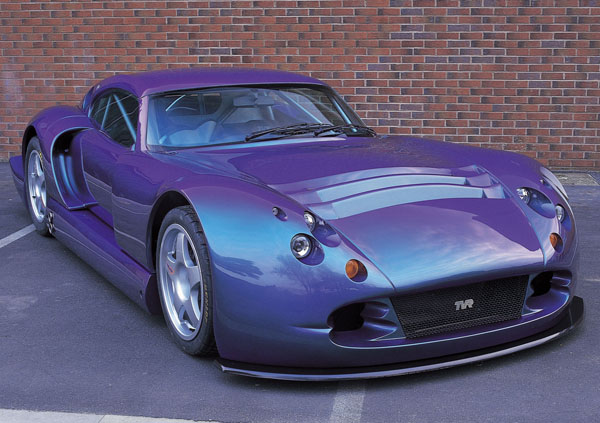 The majority of TVR Ceberas were built in 1999 or 2000, most of them six-cylinder cars. The Cerbera Speed Six was developed by TVR company principal Peter Wheeler to give enthusiasts the same joy they got from driving Aston DB4s and E-type Jaguars. What resulted was an honest-to-goodness GT of the old school. The first Cerbera used a V8 engine which proved to be a powerful monster, one Wheeler felt was too much for many sports car fans to handle. So, in 1998, he initiated the Speed Six.

Rather than simply building a cheaper variation on the theme, Wheeler’s crew changed the Cerbera’s fundamental character, the result being the best car TVR ever made. Central to this was the longitudinally-mounted 3966 cc all-alloy straight six with dual overhead cams and, unlike the V8, a four valve per cylinder head. The result: 260 kilowatts at 6800 rpm and capable of achieving the 0 to 96km/h dash in 4.5 seconds, and 160 km/h just six seconds later.

Underneath the glass fibre shell, the familiar suspension comprised double wishbones, coil springs, gas filled dampers all round with thick anti-roll bars. The car was shod with small, high profile tyres. Rack and pinion steering was used with 2.4 turns from lock-to-lock. For the non-purist optional power assistance was available. Most of the Cerbera was specially made except for the Ford Fiesta tail-lights hidden behind smoked perspex covers, one of the few proprietary parts to be found on the car.

Inside, the low slung driving position was near perfect even if the view ahead through the shallow windscreen was rather less so. Where the Cerbera really scored was practicality. The rear bucket seats were just large enough for children, the smaller the better, and the size of the doors made for easy access. TVR even offered a baby seat as an option. Horn, full beam and wiper controls were mounted on the steering wheel.

The centre console which formed a barrier between driver and passenger carried most of the instrumentation, although a couple of secondary gauges and an air vent were dash-mounted. The indicator stalk mounted to the right of the steering column proved difficult for some owners to get used to as to cancel them it was necessary to move the lever again in the same direction, motorcycle fashion.

To drive a Cerbera Super Six proved an interesting experience for most testers as it required complete concentration, particularly as it had no safety net, no ABS brakes, traction control or other techno-wizardry to bail out the unwary driver. And if you owned one and needed a tune-up you couldn’t just pop into the local service station and expect them to carry it out as it was unlikely they would have the essential TVR software.