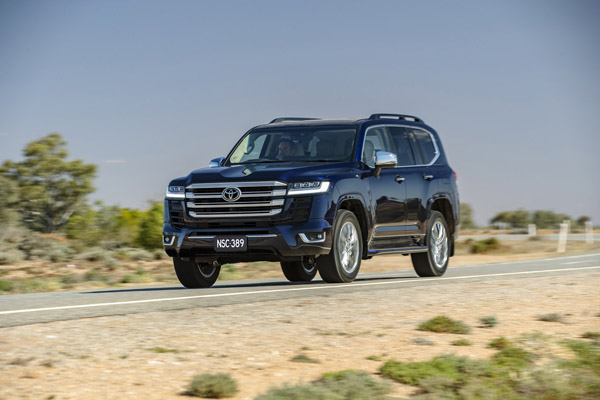 The new Toyota LandCruiser 300 series has been awarded a 5-star safety rating from
ANCAP, Australasia’s independent voice on vehicle safety.

The Toyota LandCruiser received the second highest score to date for Vulnerable Road
User protection under ANCAP’s 2020 – 2022 protocols, with a score of 81%. The
LandCruiser is able to avoid collisions with pedestrians when turning across their path, and
showed good performance in all forward pedestrian autonomous emergency braking tests,
with collisions avoided or mitigated across all scenarios.

The Toyota LandCruiser scored well in the assessment area of Adult Occupant Protection
with a score of 89%. However, the LandCruiser did present a higher risk to occupants of
an oncoming vehicle and the full penalty for vehicle compatibility was applied.

While the LandCruiser 300 series is not fitted with a centre airbag, prevention of excursion
(movement towards the other side of the vehicle) in the far side impact tests was assessed
as good, and full points were awarded

The Toyota LandCruiser also scored full points for protection offered to child occupants in
the MPDB and side impact tests, with a score of 88% in this assessment area. However,
top tether anchorages are not available in the third row and installation of child restraints is
not recommended in these seats.

In the assessment area of Safety Assist, the Toyota LandCruiser performed well with a
score of 77%. The LandCruiser is fitted with an AEB – Car-to-Car system, which avoided
or mitigated collisions in most test scenarios, and a lane support system (LSS).

Carla Hoorweg went on to say: “Larger, heavier vehicles always present higher risks for
other road users and this is why ANCAP focusses on a vehicle’s ability to either avoid a
crash, or reduce its impact, through our suite of Safety Assist tests.”

The 5-star safety rating applies to all variants of the Toyota LandCruiser, except the GR
Sport, which was not assessed.