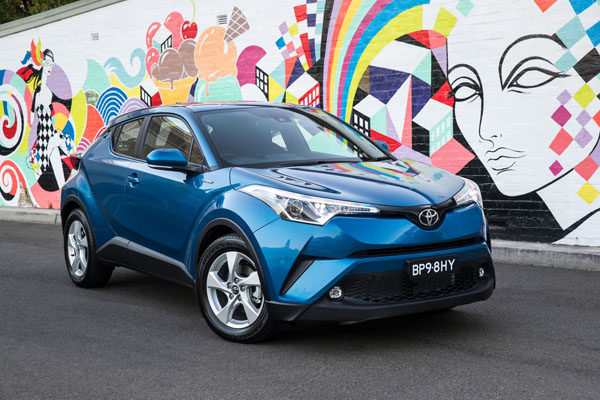 And now for something completely different. Toyota C-HR answers the critics who say the Japanese giant makes nothing but boringly sensible vehicles.

Akio Toyoda, the current head of the automotive company started by his grandfather, issued orders to his stylists, and you see the result here. Toyota C-HR is like nothing else we have seen before, with sharp diagonal lines, inside and out, standout wheelarches, and a rear that’s so complex it initially confuses the mind.

Even better, C-HR is offered in interesting colours to hopefully the 500 shades of grey haunting our roads these days. Red, orange, blue, even two-tone schemes let owners make a real statement. Though it has to be admitted there are greys in there as well as Toyota wants to cover all bases…

The C-HR fills a long standing gap in the company’s lineup. Though Toyota is extremely strong in every other area of the Australian 4WD and SUV market, a small-medium contender was missing – because the RAV4 had grown to become a family wagon not a trendy small vehicle.

The delay was explained by Toyota C-HR chief engineer, Hiroyuki Koba, who honoured Australia by flying down to introduce us to his new car. It had intended to introduce the C-HR several years back and work began in 2010. But part way through the design things were halted to make it part of an all-new lightweight platform. A smart decision because the light, strong body feels really taut and precise on the road.

Power for the C-HR comes from an all-new four-cylinder turbo-petrol engine displacing 1.2 litres. A thoroughly modern unit, it produces torque of 185 Newton metres, starting from a low 1500 revs and running up to 4000 rpm, so most drivers will be experiencing top torque virtually all the time. 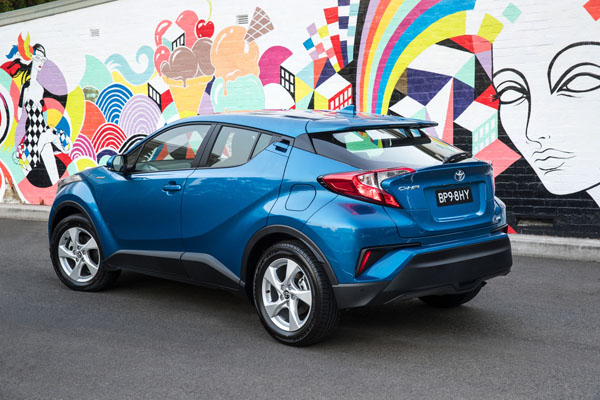 Peak power is just 85 kilowatts. But it’s torque that talks and during our drive program from North Melbourne to the Yarra Valley and back to Tullamarine airport we were most impressed by it. It pulls strongly from low revs with minimal turbo lag due to its small capacity.

The great majority of buyers are likely to opt for the CVT automatic (with seven pretend gears for pseudo-manual operation), which is a shame because we spent a couple of hundred kilometres in a C-HR with a six-speed manual gearbox. This is a delightful unit with well chosen ratios and a slick action.

If you’re feeling lazy you don’t even have to rev match the gearchanges in the manual – the car will do it for you. But if you don’t like that and want to take full responsibility of the gearbox you can switch that feature off. Chief engineer Koba is a competent weekend car racer, in single-wheelers amongst other weapons and has total understanding of what ‘real’ drivers want from their cars. 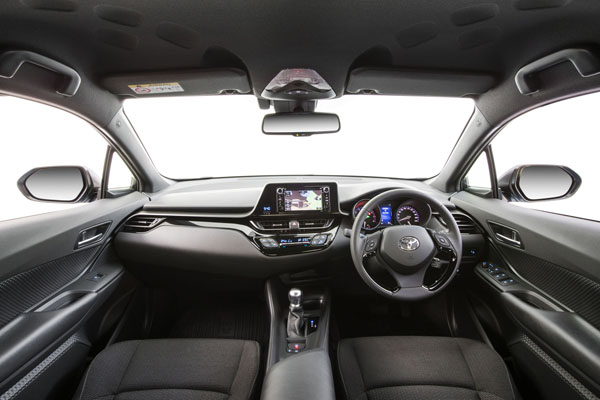 Handling is excellent, with the C-HR stepping in to maximise road grip by sensing what each wheel is doing. This is becoming increasingly common in high-performance sportscars, even in Grand Prix cars, and it’s interesting to see it making its way down to machines like this sporty Toyota SUV/hatch/coupe – whatever you want to call it.

An advantage of electronics in the suspension is that ride comfort is maintained. The little Toyota covered fairly rough stages of dirt road during our media drive day and shrugged off the surfaces with ease.

There is good interior room for four adults, with the back seats providing surprisingly good head and legroom. However, the swoop-down roof means the back seats are set pretty low and are as comfortable as you might expect. The combination of lowset seats and a very high waistline will cause problems with the view out for children in the back. Perhaps take them along on your personal pre-purchase test drive to check on this.

Did you spot the rear door handles in our photos? They’re up there near the roof if you didn’t …

Toyota C-HR is now on sale at all Toyota dealers. It’s priced from a recommended retail of $26,990 for the six-speed manual front-wheel-drive C-HR. Another $2,000 is added for the automatic, and a further $2,000 for the of all-wheel drive powertrain.

The topline C-HR, named the Koba in honour of the chief engineer, has 18-inch alloys, leather-accented seats, keyless entry and start, LED lamps front and rear and a clever nanoe system that moisturises cabin air. The C-HR Koba is priced at $35,290.