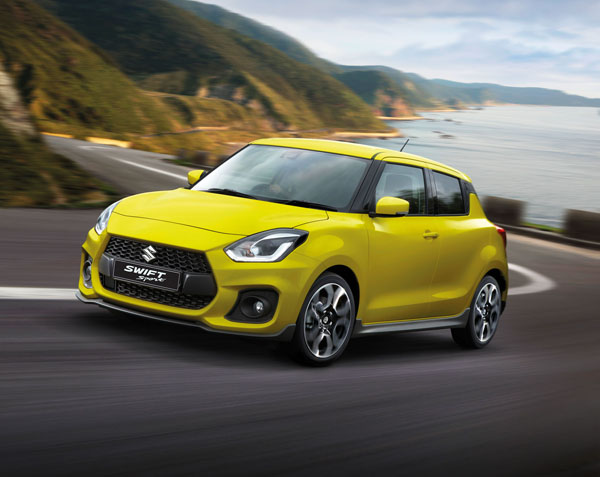 Suzuki has been producing small sporty cars for many years. Though the Suzuki car division is separate from the motorbike one there’s obviously trading of design and engineering ideas between the two, resulting in cars and bikes that are more than mere transport.

In fact we’ve spent many fun times fanging Suzuki cars around the company’s race circuit in Japan over the years. While it’s set up for testing and tuning racing bikes it gave us a solid insight into Suzuki’s way of thinking in all its products.

Unfortunately we did not have a chance to take the Suzuki Swift Sport Turbo around that circuit, rather we did several hundred kilometres testing in our home area between the Gold Coast and Brisbane. Though Covid-19 did shut us out of the brilliant hilly roads of Northern NSW – perhaps that will give us an excuse to borrow a Swift Turbo when life goes back to normal.

See more in the Driving section of this report.

STYLING
Differentiating between the standard and Swift Sport models is easy, with the latter integrating a bolder front profile and a more assertive rear. The bold front grille, side skirts and roof spoiler all add to the Sport in the little Suzuki’s name.

It sits on open-spoke black lustre 17-inch alloy wheels with polished feature edging and it has 195/45 R17 series tyres. It has twin exhaust tailpipes.

There’s a new two-tone colour; flame orange with a black roof, which looked brilliant on our test car. There is also a yellow as a sports colour. Other colour options fitted to the Suzuki by the Queensland importer (my home State) include Burning Red, Blue and Mineral Grey metallics along with White and Black Pearls.

INTERIOR
The race-bred theming is carried through to the interior with firm bucket seats, red formula-faced instrumentation, alloy pedals and styling accents.

The latest upgrade also includes a new digital speedo in the 4.2 inch centre information display panel between the tacho and a traditional speedometer. 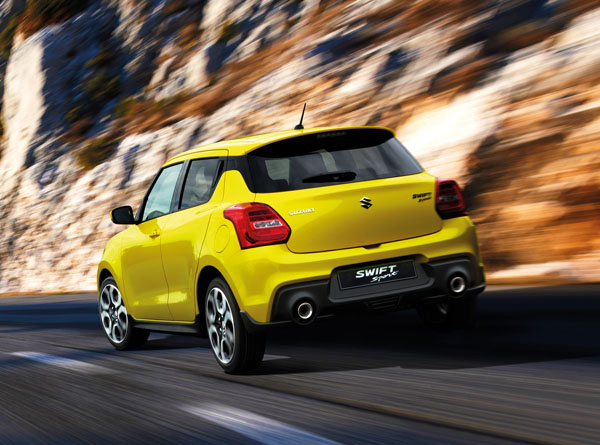 ENGINES / TRANSMISSIONS
Powering the Swift Sport Turbo is a 1.4-litre in-line four-cylinder 16-valve engine with variable valve timing on the inlet side. It produces 103 kW of power and 230 Nm of torque.

The engine is a high-tech unit with direct-injection, seven-hole injector nozzles injecting fuel directly into the combustion chamber. piston cooling jets, an oil cooler and an intercooler.The turbo is mounted on the cylinder head directly at the end of the built-in exhaust manifold.

SAFETY
The already good five-star safety rating of Suzuki’s Swift Sport Turbo has been further enhanced as part of the 2020 upgrade.

It now has blind spot monitoring, a rear cross traffic alert system and heaters on the outside mirrors to delist them.

These are in addition to the existing adaptive cruise control; lane departure warning and a weaving alert; hill holder; high beam assist which automatically switches the headlamps between high beam and low beam depending on surrounding conditions.

Should you, or another driver, still manage to crash there are front, side and curtain air bags. 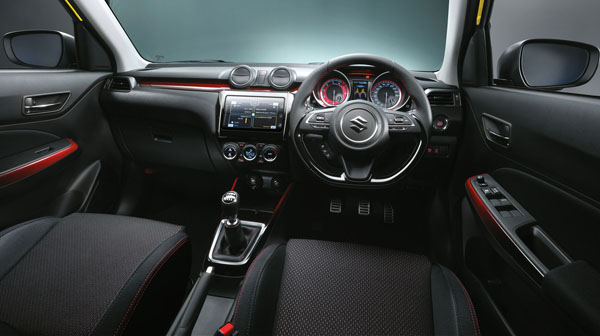 DRIVING
Engine performance is excellent, with minimal turbo lag followed by a nice surge of acceleration. In a very Suzuki way the engine really loves high revs. While the turbocharger does give plenty of grunt from about 2000rpm up there’s a feeling of eagerness from the engine that makes getting up to the higher rev ranges even more fun.

The automatic transmission in our test car (pity!) was generally in the right gear at the right time. Indeed, it’s sad to realise that autos are getting so good these days that they are often quicker than manuals. So – all keen drivers – get ready for the days when DIY changes are a thing of the past. Don’t believe us? Go to your local Ferrari dealership and ask to buy a manual…

Interestingly, the suspension has Teflon seats on the stabiliser mounts. The wheel hub and wheel bearings are engineered specifically for the Swift Sport Turbo. The rear shock absorbers also are Tenneco-made Monroe units.

SUMMING UP
The Suzuki Swift Sport is a delightful small car. Because it’s light and nimble it seems to cry out to be driven in a sporting manner. So it often provides more driving pleasure than larger, heavier sports machines.