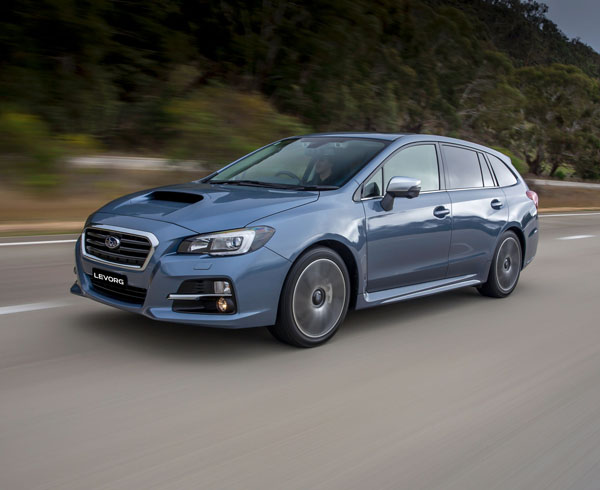 The crew from Monty Python may well have had the Subaru Levorg in mind when they coined the phrase “And now for something completely different …” because there’s nothing else on the Australian market that can quite match this Japanese station wagon’s combination of stylish looks, high-performance, practicality and value.

For starters it’s a station wagon which makes it something of a rarity in this SUV-centric era. Add the fact that it shares much of its underbody componentry with Australia’s favourite performance car, the Subaru WRX.

About the only ugly thing about Levorg is its name which we’re told by Subaru is a mixed up merge of Legacy (the name the rest of the world uses for Liberty), Evolution and Touring. Don’t quite see it ourselves, not that it really matters.

On sale here since June 2016 Levorg was given an upgrade in August this year that included a new entry-level model (from $35,990) with a smaller 1.6-litre engine and, at the opposite end of the range, a new STI Sport model.

STYLING
For a company that rates substance over style Subaru has pulled a rabbit out of the hat. From the front it’s all WRX with its bold grille and large bonnet scoop but the standout feature is its Euro-wagon profile which is a break from the conservative boxiness of previous Impreza and Liberty wagons. The rear is more hatch than wagon in appearance, with some neat sculpted lines.

The new Levorg STI Sport is distinguished by 18-inch wheels and an STI body kit with exhaust tips, side sill plates and a different design of front and rear bumpers. WR Blue is available as a colour option.

INTERIOR
Interior space is good with reasonable legroom in the back seat, there’s certainly enough space for children who haven’t yet reached the hulking-teen stage. The wagon’s load area is well shaped and easy to load. 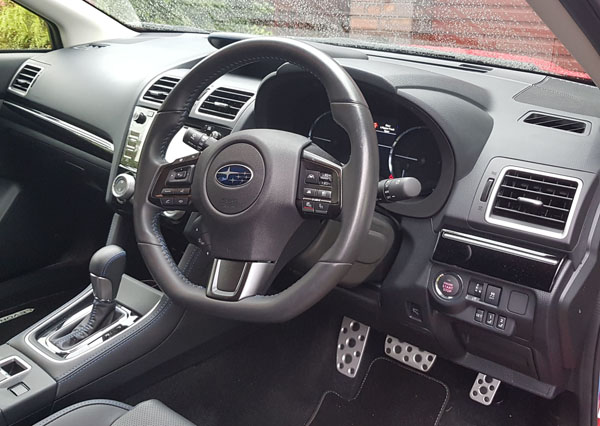 ENGINE / TRANSMISSION
The new 1.6-litre, the first of its kind to be used in an Australian Subaru, is a horizontally-opposed (Boxer) turbocharged petrol unit. It generates up to 125 kilowatts of power from 4800 rpm and 250 Newton metres of torque between 1800 and 4800 revs.

The 2.0-litre engine needs no introduction. It’s exactly the same highly-popular unit that powers the WRX with outputs of 197 kW and 350 Nm from 2400 rpm.

A continuously variable transmission with six manual overrides takes torque to all four wheels by way of Subaru’s symmetrical all-wheel-drive system. The 2.0-litre models have variable torque distribution, the 1.6 gets active torque split.

One clever innovation in all variants above the 1.6 GT is Smart Rearview Mirror which uses a camera mounted inside and above the rear tailgate glass to project the area behind the car onto the rearview mirror.

This is activated by using the anti-dazzle lever at the bottom of the mirror. Switching the lever back returns to the normal mirror mode. The camera view is around 20 per cent wider than the normal mirror view and is especially useful in fluctuating light conditions or when passengers and/or cargo obscure things.

The three higher-spec models also get Front View Monitor which uses a camera at the front passenger side of the car to display images onto the smaller Multi-Function Display and check for approaching vehicles or pedestrians as well as the distance from the kerb.

All Levorg models get the maximum five-star ANCAP rating.

DRIVING
Our test car was the Levorg 2.0 GT-S with its standard sunroof which meant lowering the driver’s seat to the lowest setting for me to fit. The seats are comfortable and supportive.

The tried and proven 2.0-litre WRX engine provides sharp acceleration with a minimum of turbo lag and plenty of torque on tap once the turbocharger is up to speed.

There’s no manual option available in Australian Levorgs, that said the standard CVT transmission is one of the best of its genre that we’ve driven. It’s well-tuned and comes with six preset ratios for manual changing through steering wheel mounted shift paddles.

While it certainly has a WRX feel to it Levorg has a slightly softer suspension in line with its grand touring aspirations although we get encounter a couple of potholes that sent a sharp shudder through the car.

Handling is sharp with excellent grip, precise turn and good feedback through the steering wheel.

We’ve yet to drive the Levorg 1.6 GT but will be doing so over the Christmas / New Year period and will publish our views shortly afterwards. It’s $7000 cheaper than the previous entry-level 2.0 GT so it will be interesting to see how it performs.

SUMMING UP
We went into the Levorg immediately after spending a week in the WRX STI. Twenty years ago we’d have had to be dragged kicking and screaming out of the STI but this time around in our approaching dotage we were more than happy to settle into its larger, more sedate sibling.

There’s still plenty of driving enjoyment on tap but without that hard edge of the topline Rex.

Despite its relationship to the WRX the Levorg is aimed at the type of high-performance wagons produced by the much more expensive German brands. With its combination of sophistication, dynamic ability, style and value it presents a compelling case.