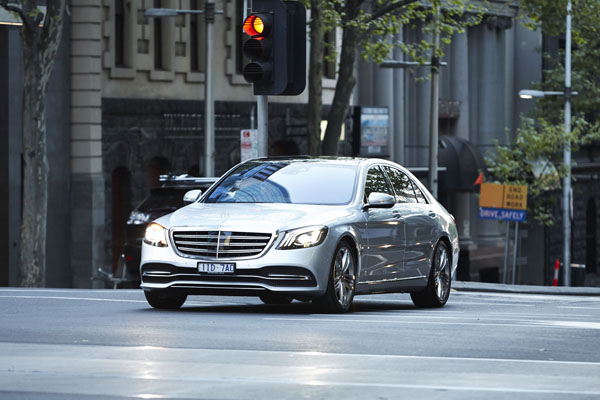 New Mercedes-Benz S-Class and Mercedes-Maybach models are on ships headed for Australia as we write. As befits the prestigious German marque the topline models both are crammed with the latest high-tech features.

When Maybachs were launched in 2002 sales very slow, chiefly due to extremely high prices, but also because very few people knew the name.

Equipment offered on S-Class models is comprehensive. Standard on all models are Comand Online with Widescreen Cockpit; a multifunction steering wheel with Touch Control buttons; touchpad with controller; Smartphone Integration package with Apple Car Play and Android Auto. This is all topped of with a wireless charging system for mobile devices.

There’s an ambient interior lighting scheme featuring 64 colours and 10 colour schemes to let you dial up the best in travel for you and your passengers.

Distronic Active Proximity Control and Active Steer Assist support for the driver in helping to keep a safe distance and steer. The speed is now adjusted automatically ahead of curves or junctions.

This is complemented by Evasive Steering Assist and also the driving assistance package Pre‐Safe Plus. This includes pedestrian recognition and additionally takes into account dangerous situations caused by traffic following behind, such as a rear impact.

Sitting above the Mercedes-Benz S-Class range is the Mercedes-Maybach S 650, an imposing long-wheelbase saloon with an extensive list of luxury features focused on the comfort of the rear seat passenger.

Highlights include a four-seater layout with electrically adjusting rear seats including heating and cooling settings, plus a full-length console and folding tables. There’s an additional 77 mm of legroom (including electrically adjustable footrest) behind the front passenger seat to provide even greater comfort for the chauffeured passenger.

Maybach is powerful by a superb V12 engine along with Magic Body Control active suspension ensure a smooth and effortless driving experience.

New Mercedes-Benz S-Class and Maybach models are due to arrive in Australia in December and one of them would make a great Christmas present. May we suggest you move reasonably quickly as dealers are already reporting many enquiries.

WILHELM MAYBACH
Wilhelm Maybach was one of the automotive pioneers in the late 19th century and worked with Gottlieb Daimler. He was a co-designer of the engine used in the first Mercedes model in the earlier days of the 20th century. Huge, very stylish Maybachs were made until the late 1920s.