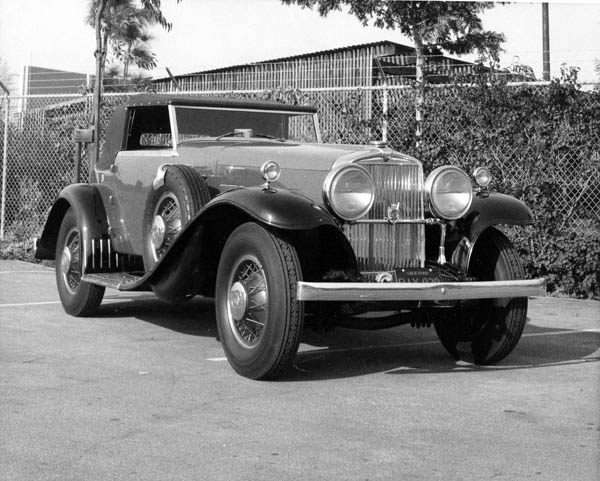 Harry C Stutz built his first gas buggy in 1899 and later went into the manufacture of
transmissions and axles. His first involvement with automobile manufacture was in 1907
when he designed the American Underslung. Stutz created the Underslung by inverting an
orthodox chassis so that it hung from its axles instead of riding above them. With front and
rear leafsprings anchored outboard and above the frame, added stability was obtained.

This placed the centre of gravity much closer to the ground and these basic principles are
still common to all modern high performance cars. Total advantages claimed included a
straight-line driveshaft, low centre of gravity, large wheels, upward spring recoil and
adequate ground clearance.

After this Stutz built a car which carried his own name so as to promote his three-speed
transaxle, the first single unit transmission, and he entered the prototype in the first
Indianapolis 500 on May 30, 1911. Although the car only finished 11th and failed to win
any prize money it performed well throughout the race, without any mechanical failures,
and gave Stutz the confidence to commence manufacture of a car based on the racer.

Stutz racers proceeded to finish fourth and sixth in their home town’s classic race in 1912,
and third in 1913, behind Peugeot and Mercer. Frequently Stutz was the only American-
built car to finish.

The most famous of the Stutz cars, the Bearcat, introduced in 1914, was in effect a racing
car equipped with wings, running boards and headlamps, resembling its equally stark rival,
the Mercer Raceabout. Most were powered by a 6.4-litre T-head biblock four-cylinder
Wisconsin engine that developed 45 kW at 1500rpm. Features of this engine were the
high-pressure lubrication and the use of aluminium pistons. At 2045 kg, the car was
heavier than the Mercer but cost less to buy.

The Bearcat’s chassis was extremely rugged with its straight-line drive feature from the
Underslung. It retained the Stutz-designed combination of gearbox and differential, though
a cone clutch was used in place of the multiple-disc type.

The entire 1914 range featured electric lights and a self-starter, but Harry evolved his own
six-volt generator and starter motor and had them built by Remy. The dual-ignition system
used a Splitdorf magneto, and soon the twin bucket seats, rear-mounted fuel tank and
centre-lock wire wheels became the trademark of the Bearcat, along with two spare tyres
mounted outside.

The equally rare but not quite so legendary Bearcats of 1917 had a streamlined bonnet
and scuttle, a windscreen, an enclosed fuel tank and inboard gear lever. The engine had a
capacity of six litres with a long stroke of 150 mm. Right hand drive and Harry Stutz’s
original combination differential and three-speed transmission were retained. Mainly due to
a reduction in overall weight to 1365 kg these cars were somewhat faster being capable of
125 km/h.

Other models including a roadster, Bulldog touring cars and enclosed types extended the
range, but even so in these times production never exceeded 300 cars a year.