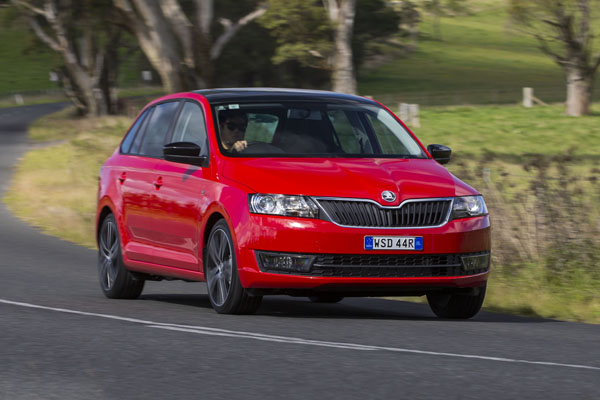 Skoda Rapid, or Rapid Spaceback to give it its full title for the Australian imports, is a mainstream small-medium five-door hatch. It could be called a station wagon as it’s rear has a handy shape making it capable of carrying bulky loads.

The Czech company has long had a policy of making space a feature inside its vehicles. There’s good room in the Rapid for rear seat passenger space, though two makes more sense than four if adults are being carried.

Overseas travellers may have noticed four-door sedan versions of the Skoda, the importer chose not to bring them to this country. A wise move a Aussies do like their hatches, wagons and SUVs.

Skoda is one of the oldest car makers, launching its first cars in 1905, these days it is a Volkswagen subsidiary after the German giant took control in 1994, after the fall of communism. The Rapid uses many out of sight components from VW, but pretty well all the external body parts are unique to the model.

Inside, the style does carry an overall feel of VWs and neat and tidy in its layout. The instrument display is simple to use at a glance.

Two engines are offered, both Volkswagen-based turbo-petrol units displacing 1.2 and 1.4 litres. They come with six-speed manual or seven-speed DSG auto, with the smaller engines using the manual. 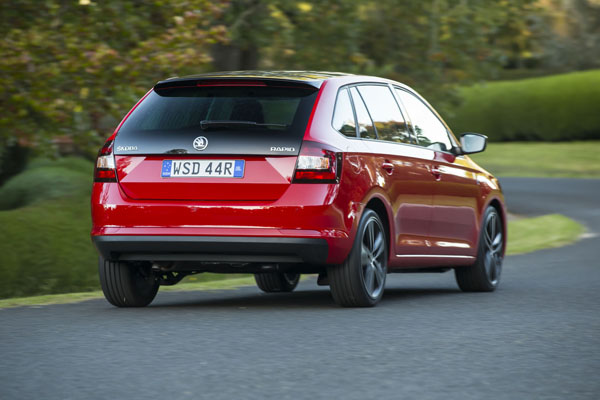 The Rapid has had a five-star ANCAP rating from the start and the VW Groups strong emphasis on the importance of safety meant there were further changes over the years..

The Sports Pack is a popular option in this Skoda, some may find the seats rather firm and narrow. See what you think during your test drive.

Handling is very competent on the open road in the typical European manner, with nice chassis balance and good feedback through the steering. Suspension is firm with precise and safe driving.

July 2015 saw revisions to the Rapid range that added a semi sporty look. Rapid Elegance was replaced by the Monte Carlo.

From a visual point of view the Monte Carlo has an emphasis on black, with that colour being used on the 17-inch alloy wheels, radiator grille, headlight and foglight surrounds, door mirrors. Inside are black carbon fibre inserts and on the instrument cluster.

The biggest changes were under the bonnet with added power and torque.

In 2017, realising that sales were still too slow, the range was trimmed to a single model, the 92TSI. Sadly our favourite, the Monte Carlo, was one of the casualties.

It has been rumoured that the almost all-new next generation 2020 Skoda Rapid won’t be imported to Australia. Keep track on the news pages of automotive websites.

Perhaps we are being overly optimistic, but we feel Skoda may become better regarded in Australia some time in which case the currently low prices may cease. Make up your own mind, but it’s possible you may be onto a winner in today’s market.

Skoda often operates in Australia through semi-autonomous dealership that are separate from Volkswagen ones. However, VW dealers can do repairs if you’re in an area with without a representative from the Czech Republic.

WHAT TO LOOK FOR
A full service history by a Skoda dealer or a qualified mechanic is a sensible move.

Ideally genuine Skoda parts should have been used during any servicing and repairs.
Headlights may have moisture inside them, a sign of poor sealing. Potentially dangerous if you’re driving at night, so have the replaced.

Previous repairs to body damage should be to a high standard. Again, have a professional do the checks if you’re doubtful. Either that or find another Rapid.

Scratches and tears in the luggage area, may mean a Rapid has done some heavy-duty cargo hauling.

Engines that have been running on lower grade fuel may be down on power. Recommended petrol is usually 95 octane, check that on the sticker on the car or in the handbook.

The six-speed double-clutch automated manual had problems, check the changes are smooth and fast. However, at very low speeds they may be slow and jerky, if you feel this is too bad have it checked by an expert. The seven-speed DSG is less troublesome.

Check all electrical items work correctly as Skoda / Volkswagen has problems in this area from time to time.