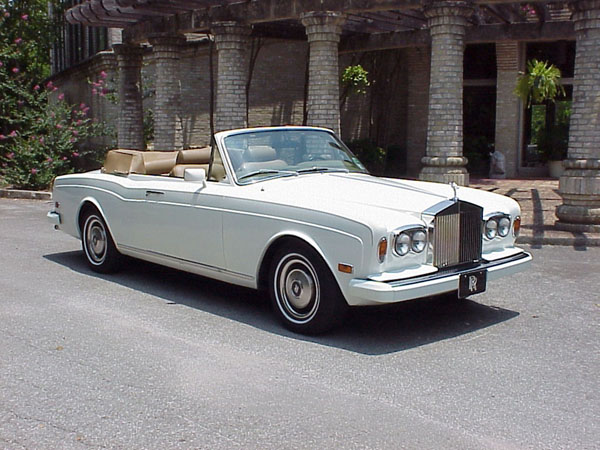 The Corniche was Rolls-Royce’s coupe and convertible version of the Silver Shadow produced between 1971 and 1996. With the release of the Silver Shadow range in 1965, which had an all-in-one chassis less four-door body shell it was incorrectly considered that the release of this model would see the end of special-bodied models. Up to that time coachbuilders found it easy to construct coachwork for fitting to models with a separate chassis but almost impossible to do the same thing on cars built as a monocoque structure.

Rolls-Royce overcame this obstacle by investing heavily at their Mullinar Park Ward body making facility so they could perform the miracle themselves. Starting in 1966 and using the saloon’s platform they introduced a sleek two-door saloon and followed this in 1967 with a convertible version of the same car. They also performed the same magic on Bentley and both Rolls-Royce and Bentley versions were sold.

These cars, updated and more powerful were rebadged as ‘Corniche’ models. The saloon version was dropped in 1980 but the convertible sold steadily until the mid-1990s.

Corniche was powered by a 6.75-litre V8 engine using two horizontal SU carburettors and Bosch fuel injection which gave the car a top speed of around 200 km/h. The car had automatic transmission and independent front and rear self-levelling suspension. The two-door coachwork was well detailed and dignified and fitted out in the same tradition as standard on all Rolls-Royce vehicles with leather seating, wooden facia panels, deep pile carpets and a full array of instruments and controls.

The convertible version was topped off by a well detailed and finished power-operated soft-top covering the four-seater interior. Such was the company’s attention to detail that it regularly took two weeks to manufacture, fit and adjust before new cars could be delivered. In a good year, more than 200 Corniches would be made, and almost 6000 convertibles were produced over the model’s 23 year life.