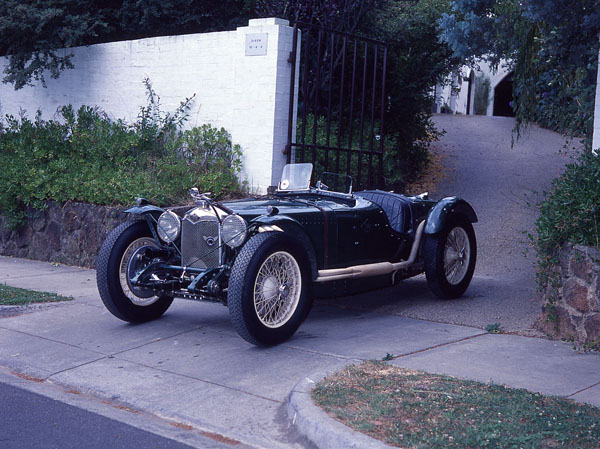 The Riley Brooklands was first introduced in mid-1927 and was produced from 1927 to
1932. It was powered by a front mounted four-cylinder 1087 cc overhead-valve engine
which had part spherical combustion chambers driving the rear wheels. This engine was
originally introduced in the Riley Nine family car in 1926 and its early performance
indicated that it would make a good power source for a sports car.

After some modifications, including the fitting of two horizontal SU carburettors, power
output was raised to 37 kW at 5000 rpm, very high for that time. When fitted to a light
sports car short wheelbase chassis frame and two-seater body this small, lightweight
sports car had a top speed of 128 km/h. It had a beam-axle front suspension and also a
beam-axle at the rear.

It was not until 1929 when the sports Riley was raced at the Brooklands circuit that it
achieved a top speed of 157.8 km/h. It was at that time it became known as the
‘Brooklands’ Riley.

During the 1930s Riley Brooklands became one of the most successful works and
privateer racing cars. It certainly out-performed the MG M-type Midgets which were
popular sports cars at that time.

The Riley Nine family car proved both reliable and popular and more than 30,000 of these
cars were built in various forms. However only 200 of the Brooklands sports cars were
known to be built. This was mainly because the car had a better reputation as a hard-
sprung racing car than a comfortable sports model suited to the week-end away type of
motorist.