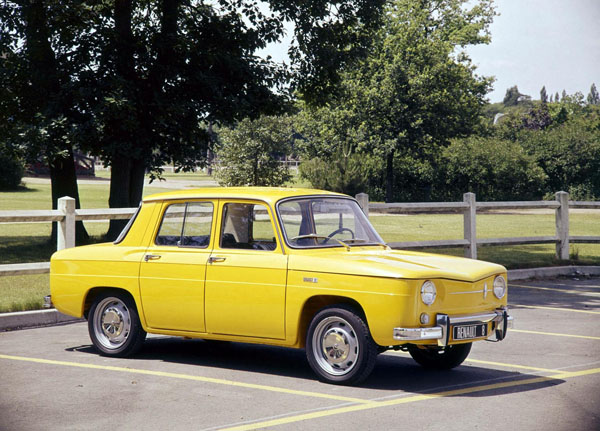 The Renault R8 was introduced in 1962 and was based on the Renault Dauphine. This was the first ever mass-produced car to feature disc brakes on all four wheels. It replaced the Dauphine which was similarly equipped and was still in production. The 8 was powered by an all new 956cc engine developing 32kW. Its sister vehicle, the R10, a more upmarket version of the 8 was launched in 1965.

By 1970 more than a million and a half of the two models had been made. Both cars ceased production in France in 1971.

Keen observers would note a similarity between the Renault R8 and the Alfa Romeo prototype 103. This is because Alfa Romeo and Renault had a loose business partnership during the 1950s and 1960s. During this period Alfa Romeo built the Renault Dauphine under licence in Italy.

The R8 was chosen for Renault’s introduction of electro-magnetic automatic transmission in 1965. This unique design was available for both the R8 and R10. The transmission was developed and produced by Jaeger. In its design the clutch was replaced by a powder ferromagnetic coupler. The transmission was actually a three-speed mechanical unit similar to that of the Dauphine, except that it had synchromesh on all gears. The driver could operate it by means of a push-button control panel enabling selection of forward or reverse drive but it also had a governor which sensed vehicle speed and throttle position.

The entire system was electromechanical with no hydraulics, pneumatics or electronics associated with its operation. In this form there was no loss of fuel economy as it worked just as a manual transmission did, however the use of only three forward gears was thought to be restrictive and the system was also rather jerky in operation. This transmission was also used in the Dauphine and Caravelle.