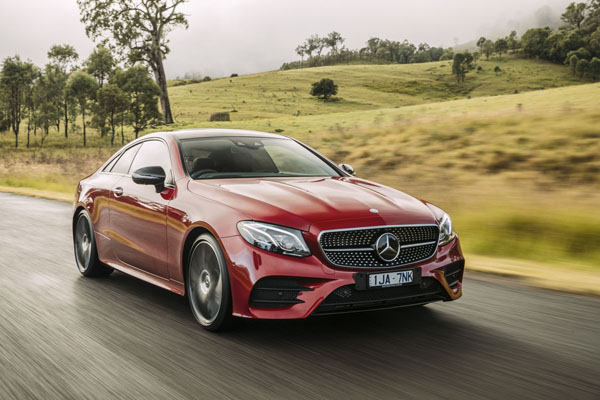 Last week we published technical and equipment details of the new Mercedes-Benz E-Class coupe, but the importer asked us not to give driving impressions straight away. That was to allow others who drove the cars in the days that followed our launch the chance to all get into print on the same day.

Mercedes chose a fascinating drive route to the Daylesford area of Victoria, using minor roads where possible. The idea was to display the new coupe on the sort of trip likely to be undertaken by couples on a quiet weekend. Perhaps couples with another couple in the back to make use of the added spaciousness, though we suspect otherwise.

The front seats are spacious and comfortable. The A-pillar created quite a blind spot for me at times, chiefly due to the pillar having a steeper angle. The twin back seats are now more suited to adults as the vehicle is larger and sits on a longer wheelbase. However there is likely to be the inevitable requirement for legroom compromise if tall people travel behind one another.

The weather was cool but pleasant and the misty conditions and autumn leaves certainly added to the occasion. We didn’t test the open-air feel offered by lowering all the windows to leave the complete area from the front to the rear windscreens undisturbed. Too cold, we will test it when we get a new E-Class coupe in our home area of the Gold Coast.

We trialled two cars: an E 300 turbo-petrol and the hotrod(ish) E 400 4Matic bi-turbo petrol with 245 kW. Both proved to be quality touring machines. 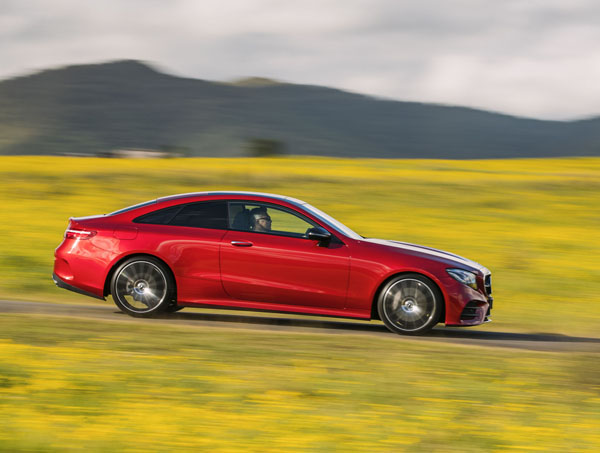 The selectable driving modes allow ranges from comfort to sporting. In the E 300 we left it in the comfort settings all the time, relying on the car to momentarily move onto the sporting settings to get us out of trouble if we pushed very hard at bends and struck some harsh dips and lumps partway through. This gave us the cosseted feel the typical buyer is likely to be looking for.

The ride was smooth and generally quiet, though the notorious Aussie coarse-chip surfaces did create some noise at times – we have heard worse, but perhaps do part of your pre-purchase road testing on that sort of road if you’re likely to do similar picnic trips.

The E 400 coupe definitely had a sportier feeling, particularly in the steering and reacted as though it’s smaller and lighter than it really is. Driving through all four wheels gives it immense road grip and we attacked bends at speeds that probably wouldn’t have pleased our passenger(s) out for a gentle trip… 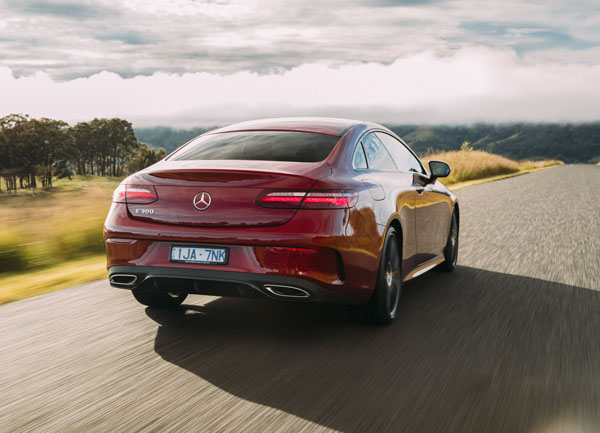 Turbo lag is there but it has been kept to a reasonable minimum and fast downchange response from the nine-speed automatic got engine revs up to mask a lot of the lag. Once the engine was on song it had plenty of punch and was a real delight to experience.

Ride comfort in the E 400 wasn’t quite to the high standard of the E 300, and there’s added tyre noise at times. All of which is to be expected.

So there you are; two newMercedes coupes with similar styling but significantly different on-road behaviour. If you’re not sure which one to buy why not take both for a test drive? There are other models as well, see the pricing information attached.