THE END OF THE LION FOR ICONIC AUSSIE UTE

The clock is counting down not only the end of Australian-made Holden cars but also on one of our nation’s most iconic vehicles, the trusty (occasionally rusty according to the lyrics of a popular Aussie Christmas song) Holden Ute.

The first ever Ute, the Holden Utility 51-2016 to give it it’s full name, was launched in 1951 and apart from the period from 1984 and 1990 (from the last WB Commercial to the first VN Commodore variant) there’s been a passenger car-based light commercial Holden on sale here ever since.

In recent times there has been something of an evolution in utes, going from cargo carriers to what are effectively large semi sports cars and being replaced by 4WD/SUV based pick-ups. One of these, the fully-imported Holden Colorado will still be available, indeed pick-ups / trucks of this type are so popular nowadays that one, the Toyota Hi-Lux was Australia’s biggest selling vehicle in 2016.

Technically a ute has the front end of a car with no dividing space between the cabin and the tray. Pickups are designed as small trucks and share nothing with car bodies. However, these days anything from with a load area is often referred to as a ute in Australia.

The current – and almost certainly last Holden Ute – is a refreshed version of the VF Commodore Series II range that went on sale in January 2017 with new equipment including head-up display and satellite navigation to all models above the entry level Ute.

DRIVETRAINS
The 2017 Commodore VF Series II Ute comes in five variants with either V6 or V8 engines and manual or automatic transmission. The entry level model, called simply Commodore Ute, and the second tier SV6 are powered by Holden’s 3.6-litre SIDI V6 engine. Its 210 kW of power and 350 Nm at 2800 rpm of torque will satisfy all but the most demanding users and the heaviest of loads.

The SS, SS-V Redline and SS-V Redline Magnum all get the added thrust and sound from a Chevrolet 6.2-litre V8 LS3 engine with bi-modal exhaust and sound enhancer with what’s called a ‘Baillie Tip’. Outputs are 304 kW and 570 Nm (at 4400 revs).

All transmissions are six-speed, automatic in all models with manual optional in the SS and SS-V.

Higher specced models from SV6 upwards add Blind Spot Assist and Reverse Park Alert. We’d strongly advise lazy or careless drivers to keep away from the range-topping SSV Redline models, but in case they do get behind the wheel there’s Forward Collision Alert and Lane Departure Warning included in the safety features.

INFOTAINMENT
The VF II Commodore Ute range uses the Holden MyLink infotainment system that integrates a smart phone and stored media with their car. It uses an 8-inch full-colour touch screen located in the centre of the dashboard for access to Bluetooth, USB and Aux devices.

Embedded Apps such as Pandora Internet Radio and Stitcher SmartRadio can be streamed through the system with occupants able to stream favourite radio stations as well as using the ‘up / down’ buttons to switch between media options. This can also be done via steering wheel-mounted buttons. 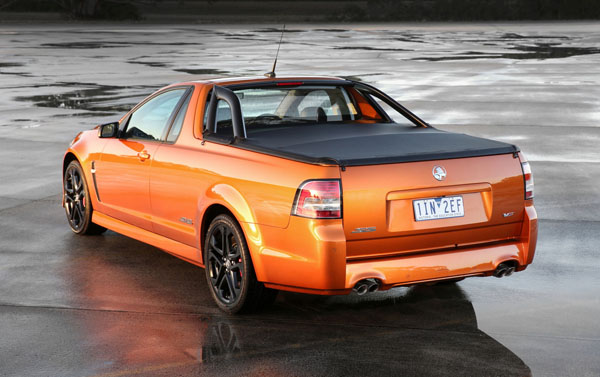 Authorities are finally starting to recognise the danger of driver inattention and with its large screen, logical button structure and Siri Eyes Free voice activation, MyLink is less intrusive than many other systems.

DRIVING
Entry and exit to the Commodore Ute is very easy and the seats are firm and supportive yet comfortable. Exterior vision is hampered by largish A-Pillars and the high positioned tray.

Fortunately the old stylised parking brake that tending to nip the driver’s fingers has been replaced by an automatic release powered brake.

Our test car was the 6.2-litre V8 SS Commodore Ute and we loved the combination of V8 power and sound.

Handling is excellent with good feedback through the steering. The electric power steering (EPS) unit gives a sharp feel as well as saving fuel. The big V8 is supported by sport-tuned suspension for improved ride comfort without handling being compromised. Even when pushed hard through tight bends it’s well-balanced and stable.

On the open road the interior of the Commodore is surprisingly quiet, keeping out unwanted road noise while allowing in the V8 burble courtesy of the bi-modal exhaust and sound enhancer.

Fuel consumption takes second stage in cars like these and we averaged in the mid 13 litres per 100 kilometres as compared to the artificially deflated 12.3 L/100 km treadmill figure.

SUMMING UP
It’s going to be a sad day when the last ‘real’ Holden Commodores come off the production line in October. It will be especially poignant when the last Holden ute emerges breaking a tradition that goes back 66 years.

So get in quick if you’re looking for a vehicle that combines tradition, style, performance and value for money.