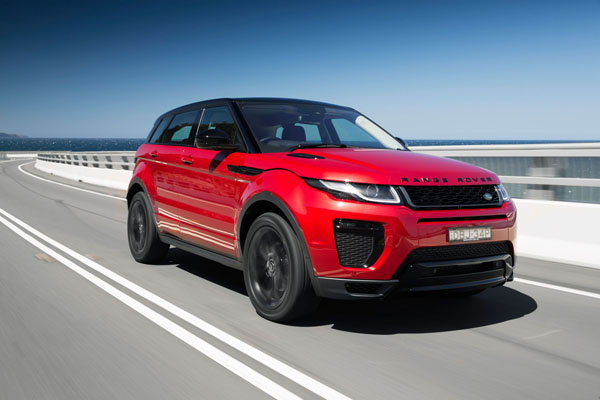 Probably most important to many buyers is the fitment of an updated infotainment system in a revised interior that shares many design cues with the much more expensive Range Rover Sport.

STYLING
When I first saw the concept that would later become the Range Rover Evoque at a Geneva Motor Show my comment to one of the chiefs of the company standing alongside me was, “Love the shape, but it won’t work as it’s obviously too cramped in the rear area.”

Was I ever wrong. The apparently unworkable shape of the “Land Rover LRX” concept was translated into reality and it became the premium Range Rover Evoque.

What looks like an unrealistically low roof is actually a clever optical illusion. Though the Evoque’s roof does slope sleekly down at the rear the angle is not as sharp as it seems. That’s because the rising belt line creates what looks to be the very low roof. However, see further notes in the Driving section of this review.

The revised tailgate has wider, slimmer high-level LED brake-lights integrated into the spoiler. 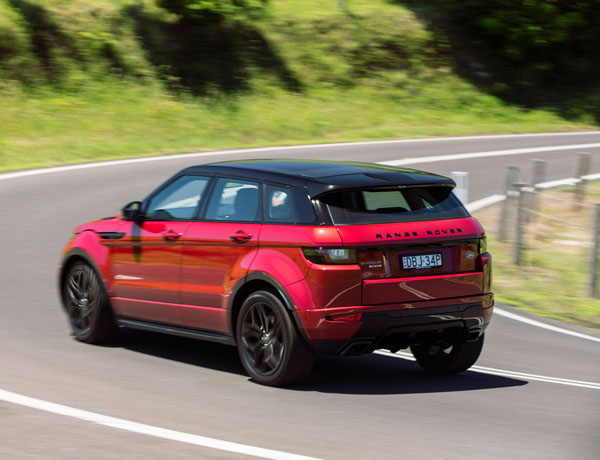 INFOTAINMENT
The new infotainment system, is accessed by way of an eight-inch touchscreen, driver’s information comes from a five-inch full colour screen situated on the central dashboard.

Rear-seat entertainment system is an option, it uses a pair of eight-inch video screens and wireless digital headphones.

ENGINE / TRANSMISSION
The Evoque has a new EU6-compliant four-cylinder turbo-diesel engine that has up to 132 kW of power and 430 Nm of torque. It features variable valve timing and low friction technologies. Selective catalytic reduction and a new low-pressure exhaust gas recirculation system significantly reduce NOx emissions.

Mated with the nine-speed automatic transmission that always seems to be in the right gear this new engine works beautifully. 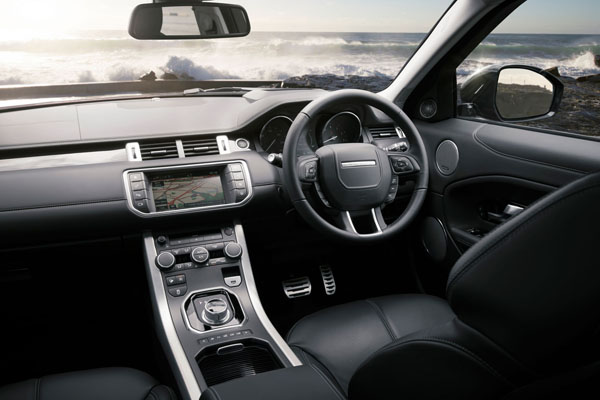 DRIVING
We found the front seats of the Evoque comfortable and reasonably spacious, particularly for a vehicle of this size. In four-door format there’s sufficient headroom for a six-footer in the back seats, though that’s probably about the limit – check for yourself if you’re likely to have tall travellers back there.

Legroom in the rear is good if tall people in front are willing to give up a few centimetres of their legroom.

The view to the side from the back seats suffers because of the aforementioned rising belt line and smaller children may struggle to see outside.

Likewise, visibility to the rear is not good as the shallow back windscreen gives a letter-box effect. A reversing camera and parking sensors make life safer.

On sealed surfaces the Range Rover Evoque handles almost as well as a hatchback. You wouldn’t describe it as sporty, but it comes close. In the original models we felt Evoque had more road noise on rough sealed surfaces than was acceptable, that’s now been toned down and the Evoque feels like the upmarket vehicle that it is on Aussie backroads.

Boot space is good and we had no trouble fitting in a couple of large suitcases without having to fold down the rear seatbacks.

The design and quality of in-cabin materials has always been impressive and seems to have lifted further with this latest model.

The all-new turbo-diesel engine has excellent performance without too much turbo lag. Once on song the torque just keeps on coming and the Evoque makes light work of hills, and spends a minimum amount of time on the wrong side of the road whilst overtaking.

Range Rover’s new Ingenium powerplant is much quieter on the outside than in previous Evoque diesels we have tested. Inside, particularly when cruising, it’s virtually indistinguishable from the petrol engine in the way sounds are suppressed.

SUMMING UP
More than 400,000 Range Rover Evoques have been sold since its introduction in 2011 and many still regard it as the best of all the premium SUVs. This midlife upgrade adds distinctive new styling, an excellent new turbo-diesel engine and up to the minute technologies.