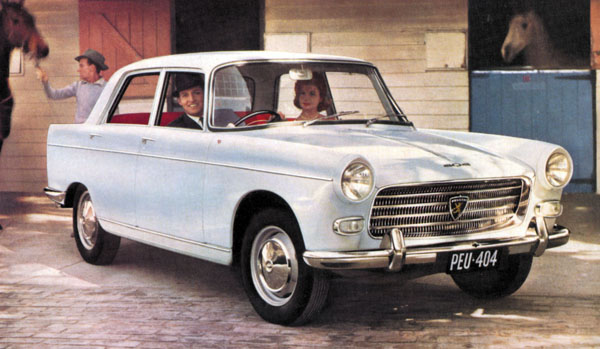 The Peugeot 404 followed on from the popular 403. It was sold with a number of different bodies – four-door sedan, two-door coupe, two-door convertible, two different five-door wagon versions, a utility and a light truck.

With a body by Pininfarina, the result of a partnership that began back in the 1950s, the 404 along with the 403, 504, 104 and 406 were considered to be among Peugeot’s most beautiful cars. Popular as a taxi, the 404 enjoyed a fine reputation for both durability and value.

With a wheelbase of 2650 mm the 404 was powered by either a 1.6-litre petrol engine developing 53 kW with the option of a Solex carburettor or mechanical fuel injection which raised power to 63 kW or a 1.9-litre diesel 47 kW engine. A three-speed ZF automatic transmission was available as an optional alternative to the standard column-mounted four-speed manual unit.

During its life the 404 enjoyed an excellent reputation for both durability and value in many European and African markets. The 404 was made under licence in Kenya until 1991.

Suspension was by way of coil springs with hydraulic shock absorbers at the front and a solid axle with Panhard rod at the rear. The fuel injected model had a maximum speed of 167km/h.

Over the model life a number of improvements were made to the engine, gearbox, lighting and brakes. In 1968 for instance, models benefited from front disc brakes and two-speed windscreen wipers were introduced in 1972.

By the early 1960s Peugeot’s assembly lines were turning out around 260,000 vehicles. In 1961 the Peugeot factory in Mulhouse was built. The firm merged with Citroen in 1976 to form the PSA group.