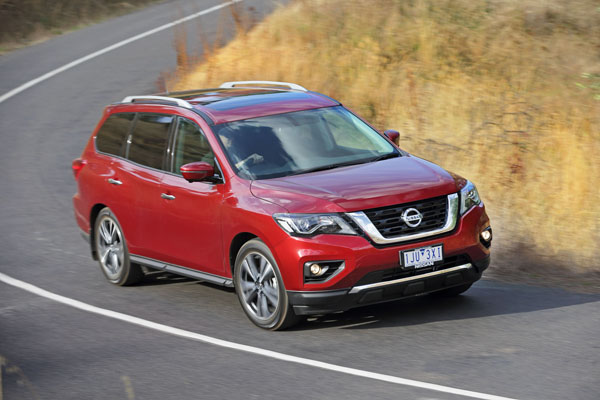 From memory, late last century the Nissan Pathfinder became the first four-wheel-drive wagon to be offered with a two-wheel drive option, in this case for the American market.

Thus, the mid-size 4×4 perhaps became the vanguard of the present sports utility vehicle tsunami around the world, which sees an SUV on almost every street corner.

The Pathfinder still plays a leading role, with the MY17 version, at more than five metres long, hopping into bed with the big SUV boys, in 2WD and 4WD versions, with petrol or petrol / electric hybrid powertrains and three specification levels – ST, ST-L and Ti.

STYLING
The new Pathfinder lets you know in no uncertain terms its position in the large SUV hierarchy with a new, more aggressive bonnet, new front bumper and fog lights.

The outside rear-view mirrors now include standard integrated turn signals. The vehicle signs off in the rear with changes which include new taillights and a more robust bumper design. 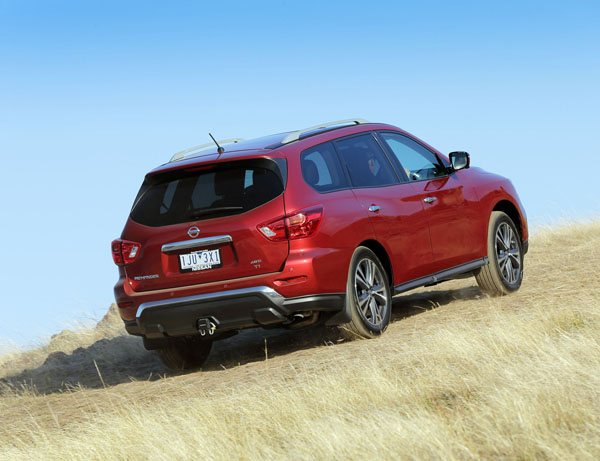 INTERIOR
The Pathfinder’s generous expansive exterior translates inside the cabin to flexibility in passenger accommodation and generous storage space. For example, the second row of seats is split 60/40 and the third row 50/50 across the range.

When both rows are folded flat, the Pathfinder offers a massive 2260 litres of cargo space. There are also ten cup holders, six bottle holders, four 12v power outlets and a handy under-floor storage compartment behind the third row of seats as standard.

INFOTAINMENT
It seems ironic that a vehicle with a name like ‘Pathfinder’ should be without in-car satellite navigation, as the ST is. Higher grades are blessed with it.

Digital connectivity is offered across the board through a new in-car infotainment system, which centres around an 8-inch colour touch screen with two USB ports. Bluetooth phone / audio streaming and voice control are now standard fittings.

ENGINES / TRANSMISSIONS
The petrol-only Pathfinders make use of a 3.5-litre V6 engine, while the hybrid variants rely on a supercharged 2.5-litre four-cylinder unit plus a 15kW electric motor.

The test vehicle was fitted with the improved 3.5-litre V6 petrol engine, which now delivers more power (195 kW) and torque (325 Nm) with more than 50 per cent of its componentry new or new-to-Pathfinder. The compression ratio has also been raised to 11.0:1 (from the previous 10.3:1). 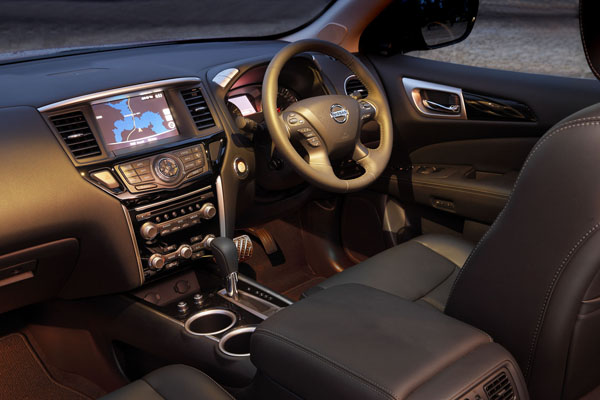 The switch to a mirror-bore cylinder coating brings down engine weight by just over one kilogram and reduces friction between the piston ring and the cylinder wall. The technology eliminates the need for a heavy cast iron cylinder liner.

SAFETY
Six airbags are fitted as standard equipment to all model grades, as is a reversing camera and rear parking sensors, helping the Pathfinder to be awarded the top five-star Australasian New Car Assessment Program safety rating in 2013.

DRIVING
Primarily aimed at the US and Middle East markets, the Pathfinder on test, in American terms, recorded 8 kilometres per litre in the urban / highway cycle in the city and 15 kilometres per litre on the motorway, which roughly translated is a respectable 12.5 and 6.6 litres per 100 kilometres respectively.

Unlike some CVTs, the Xtronic transmission includes D-Step Logic Control, which simulates shifts in a stepped gearbox, giving a more natural feeling to the driving experience.

With its more-than five-metre length, the vehicle can be a bit of a handful but a more powerful engine, firmer suspension and quicker steering response overcome potential problems on the bitumen.

However, Pathfinder people need to pick their parking spots. At almost two metres wide the super-SUV may slot into a spot all right, but passengers could remain prisoners because there’s no space to open the doors.

Not that passengers would find sitting in the 2017 Pathfinder a chore. The vehicle retains the EZ flex seating system, with the versatile second row seats offering recline, headrest adjust and slide that can offer additional leg room to third row seating occupants.

SUMMING UP
The new Pathfinder well and truly ’Trumps’ its antecedents. It is bigger, beguilingly belligerent and needs steady hands on it to stop it getting into tight spots. It doesn’t get my vote, but like ‘the Donald’, will have its followers to give it the tick of approval.