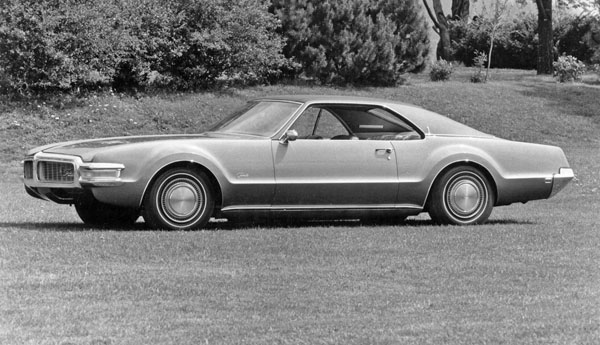 The Oldsmobile Toronado of 1965 created quite a sensation when it was first released as it brought front-wheel-drive (FWD) technology to the mass American market for the first time. And not in a compact runabout but a huge, stylish supercoupe.

In Europe, the likes of Issigonis said big engines and front drive would never mix, but the people at Oldsmobile weren’t listening: the Toronado was always going to be a big one. The clean-cut styling of the massive Toronado gave no hint of the new technology underneath – front-wheel drive.

Under the flamboyant sheet metal, the Toronado was a clever concoction of conventional Detroit practice – drum brakes all round, beefy perimeter-frame chassis – but plenty of trick stuff, at least by American standards.

The 7446 cc Rocket’ engine developing 287 kW was mounted in-line with the torque converter on the back but, cleverly, the usual three-speed Hydra-Matic gearbox (running the opposite way to normal) was nestled in under the left-hand cylinder bank. They were connected by a multiple-link Morse chain – lots of work went into making this quiet – and the power fed into a spiral bevel differential. The resultant power-pack was mounted on a rubber-insulated sub-frame which allowed for a completely flat-floor.

After being exhaustively tested – General Motors didn’t want any reliability problems prejudicing buyers against FWD – the Toronado was finally launched in the autumn of 1965 to rave reviews. Not only did its bold styling set it apart from the big-coupe herd: its handling really was more capable on the road; 60 per cent of the weight overhanging the front driving wheels meant lots of traction and fine stability yet less of the plough-on than you’d find in the comparable Buick Riviera.

Torsion-bar suspension was used up front, attached to the subframe, while a dead axle, single-leaf springs and twin vertical and horizontal dampers were used at the rear to limit hop under hard braking. Headlights hid under electrically operated flaps. The style was commendably fuss free. The Toronado’s shape was free of excessive glitz, although the dimensions were very Detroit.

The two-tone Toronado had better handling than the average American car – but few buyers noticed the difference.

Firestone developed special tyres for the Toronado with stiffer sidewall construction and more grip to take advantage of the front-wheel drive, although in service they gained a reputation for savage wear rates.

Wheels were slotted to cool the finned brake drums. The Toronado could pull you out of trouble, not push you into it. Only the too-small drum brakes were criticised in this 2032 kg, 217 km/h car. American buyers had a year-long honeymoon period with the Toronado (buying 40,000 in 1966) but from 1967 they tended to prefer the Riviera, which looked – and was – more conventional, as well as being cheaper.

The purity of the original car was lost on most Americans, who couldn’t tell if it was front driven or not, and didn’t care. It was given a completely new and aweful bodyshell from 1971 and from then on looked like every other motoring monster on the freeway. Today, a good example of the original Toronado would make an entertaining and intriguing addition to any collection of milestone cars – if you have the room. In total 143,134 Toronados were built from 1965 to 1970.