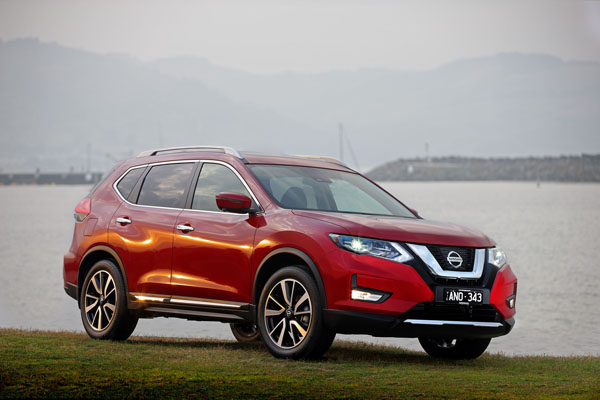 Nissan has given its midsize X-Trail SUV a big performance boost, a solid makeover in appearance both inside and out, added significant technology and improved its overall refinement.

Now in its 17th year, over four generations, with total sales downunder approaching 200,000, the X-Trail is an important vehicle in the sales armament of the Australian arm of the Japanese giant that has operated in Australia since the mid 1960s (beginning as Datsun).

Though the appearance changes to the body are restricted to the ‘soft’ areas, that is plastic and glass front and rear, visually it looks quite a bit different. New design wheels are part of the package.

Even bolder than before in its face and tail X-Trail could easily be mistaken for a new model by those who aren’t trainspotters.

Excellent news is the introduction of three new exterior colours: Marine Blue, Copper Blaze and Ruby Red. Hopefully buyers will snap these to complement the new body shape. Thus fighting against the 500 shades of grey that make our roads look so boring these days.

Inside there’s a sporty looking flat-bottomed steering wheel, different gear-shift knob design and a leather trim. The centre console and its lid have also been altered.

Black trim is standard in all, though it varies in spec according to models. However an interesting option in the top two grades, Ti and TL is upmarket looking tan trim. 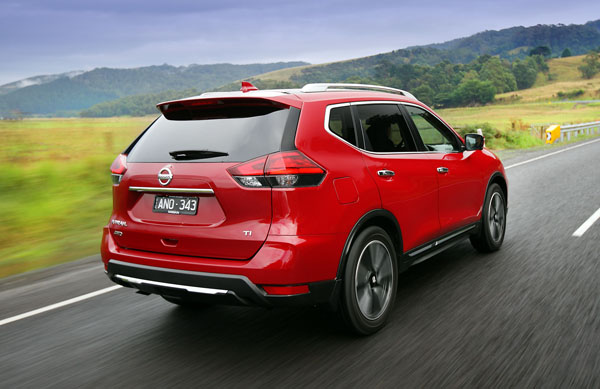 Infotainment is provided by an AM/FM/CD audio system. With connection by Aux, USB connection port for iPod and other compatible devices; Bluetooth hands-free phone system. A Bose audio system is used on the Ti and TL models.

The X-Trail is offered with five or seven-seat versions, though the seven-seater is only available if you chose the 2WD model with the 2.5-litre petrol engine.

Mechanically, the biggest change to new X-Trail is the installation of a 2.0-litre turbo-diesel four-cylinder engine in the all-wheel-drive models. With 130 kW and 380 Nm it replaces the previous 1.6-litre diesel and we found the bigger engine a real pleasure to sit behind.

Passive safety technology is a big feature throughout the latest Nissan X-Trail. Intelligent Emergency Braking and Forward Collision Warning are fitted to all variants.

Rear Cross Traffic Alert is used in all but the base ST model. Intelligent Emergency Braking with pedestrian detection and Adaptive Front Lighting are used in X-Trail Ti and TL grades. 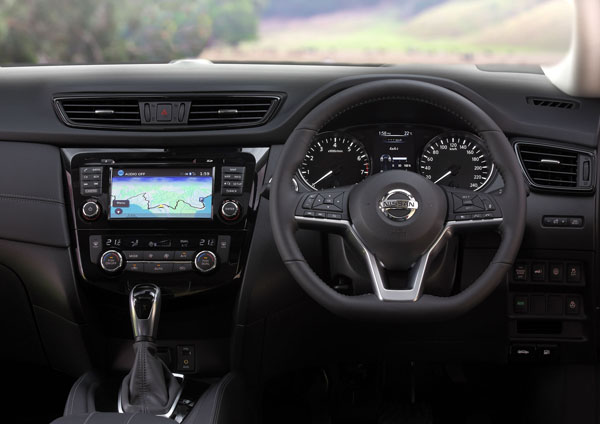 Finally the topline Ti model has Intelligent Cruise Control and Intelligent Lane Intervention, the latter steering the car back onto course if an inattentive driver doesn’t do so.

Our Nissan-arranged drive program of the latest Nissan X-Trail took place in southern Victoria, from the Otways to Apollo Bay by a circuitous route covering close to 300 kilometres.

Though the roads and scenery were stunning Nissan kept us clear of Melbourne traffic, as well as the stupefyingly boring run at 99.9 km/h on the camera-infested motorway out to Geelong, by flying us over the top of these areas in helicopters.

Great fun, but it won’t be for a further few weeks that we can give you our driving impressions in the real world of traffic, parking stations and other real-world areas.

Anyhow, the family Nissan handled rough and ready roads, including several sections of serious dirt, with ease. It’s obvious that considerable work has gone into noise, vibration and harshness (NVH) intrusion to the cabin. This really does feel and sound line a vehicle from the next class up.

The front seats use Nissan’s Zero Gravity design that tailors correct body support to individual area proved comfortable enough, though we didn’t get a chance to test them over long periods of time.

Oh, and the heated steering wheels of the Ti and TL versions we road tested were much appreciated during the cold snap that greeted us during an early Victorian winter.

Handling of the Nissan is tenacious, but not particularly interesting as the X-Trail is obviously intended for those looking for comfort ahead of sportiness.