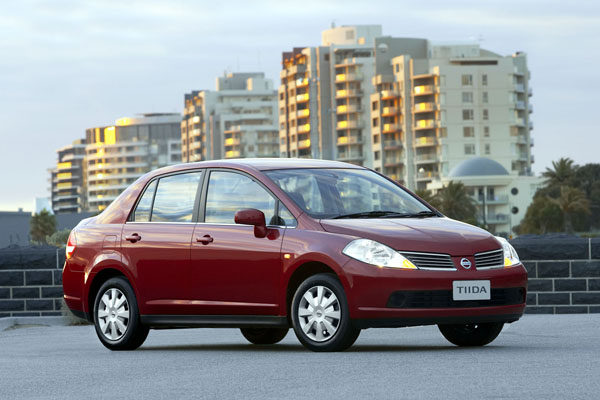 Nissan Tiida has come – and gone – from the Australian new-car market, on sale here only from February 2006 till February 2013. Were there problems with it? No, other than that it wasn’t called the new generation Nissan Pulsar and potential buyers were either confused, angry, or both. Marketing can be a weird business…

The Tiida is far from being the best looking car ever sold here. But its boxy body results in a spacious interior. The front seats are almost as wide as those of a six-cylinder car, due to clever design that sees the adjustment levers being placed in the frequently-wasted space between the two seats.

There’s as much legroom in the back seats as many large family cars. As well as good headroom and shoulder room to go with it.

The boots of both the sedan and hatch are large, with the topline Tiida Ti hatch having a further useful feature of sliding rear seats so that you can further increase the length of the luggage compartment if you don’t need full legroom in the back. 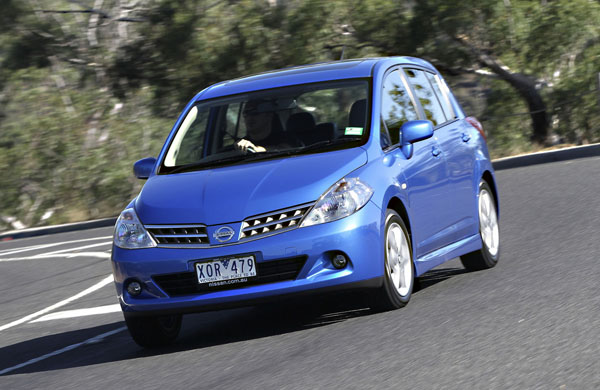 Ride comfort is good, with a reasonably supple feel from the suspension. However, the electrically-assisted steering is over light and on the vague side.

Noise and vibration suppression are impressive giving the sort of refined feeling you would normally expect from a car of the next size upwards.

It has gained an undeserved bad name because of Nissan’s decision to use the Tiida name for the Pulsar replacement when it was launched in. A bad move that has since been rectified by the return of the name Pulsar when it replaced the Tiida in 2013.

Anyhow, Nissan Tiida is a bargain on the used-car market and smart buyers may care to get in there and grab one.

In March 2010 the Nissan Tiida got a comprehensive facelift that saw its front extended and reshaped, and a new radiator grille. The topline Tiida Ti had its side skirts painted the same colour as the rest of the body to visually take some of the bulky height out of the car. It’s still on the boxy side, though.

Power comes from a 1.8-litre engine with good torque from about 2000 rpm upwards. The engine is somewhat reluctant to rev and can be noisy as the redline approaches, but it’s certainly not aimed at the sport sedan market so that’s acceptable.

Tiida has a six-speed manual gearbox, making it a leader in the class at the time. The shift is surprising noisy and gives a real clunk-clunk sound with every gearchange. We find it irritating, owners say they get used to it.

The automatic transmission is an old style four-speed unit, so you’re doing a fair few revs on motorways and during country driving.

Nissan Tiidas originally came from Japan, later a Nissan factory in Thailand provided the majority of Australian imports. Build quality is almost as good in from Thai factory as from the Japanese one.

Nissan (nee Datsun) has operated in Australia since the mid 1960s so has a strong, experienced network of dealers. There are more dealers in country areas than is usual for Japanese vehicles in this class. Pulsar was a big seller in the bush, but Tiida didn’t so as well.

Spare parts prices and servicing are reasonably priced and we seldom hear any complaints about parts availability.

Insurance premiums are midrange in price for this class and there are seldom any major differences from company to company. It’s always worth shopping around, but be sure you’re doing an accurate comparison.

WHAT TO LOOK FOR
Check for crash damage or previous repairs: Sight along the doors and look for ripples in the finish of the panels. Look for paint colours that don’t quite match from panel to panel.

Tiny specks of paint on non-painted surfaces such as windows, badges and brightwork are another sign giveaway.

Tiidas are popular as family cars so look out for a damaged interior created by rowdy kids.

Look at the condition of the boot mats in case heavy loads have been ripping about during cornering or braking.

Make sure that the engine starts easily and idles smoothly from the moment it ticks over. Be suspicious of any rattles from the bottom, these may indicate slow pickup of the oil.

Check for smoke from the exhaust if the engine is worked hard, driving up a hill in a high gear is a good test.

An automatic transmission that has harsh changes may need be overdue for a service – or worse.

CAR BUYING TIP
Keep in eye open for ads of unpopular cars as there can be quite a variance in prices when owners are struggling for buyers, grit their teeth and drop the asking amount,