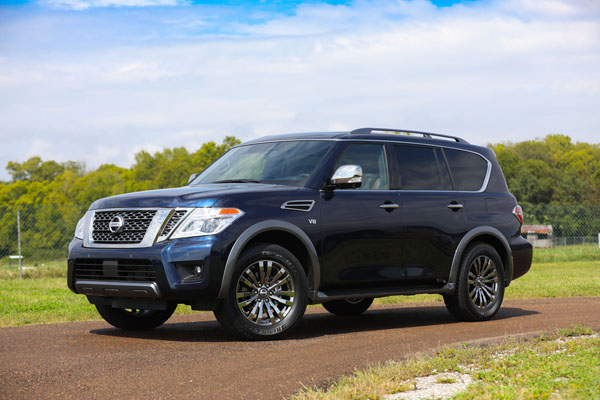 Nissan Patrol has a new look and a variety of enhancements to make it even more attractive to large 4WD / SUV buyers.

The Patrol’s front has a new grille with horizontal metallic bars, and revised foglamp housings. A new design of 18-inch alloy wheels is aimed at giving it a more premium look.

Inside, the Patrol range gets an updated infotainment system with a multi-touch panel that’s now more intuitive. There are now two USB charging points at the rear of the centre console.

The range-topping Patrol Ti-L has larger 8.0-inch screens built into the back of the front seat head rests.

As standard equipment across the range, Nissan Patrol continues to have Satellite Navigation with 3D mapping and an 8.0-inch integrated colour display with touchscreen. Theres a Bluetooth hands free phone system with steering wheel controls.

Twice the number of front and rear sensors ensure parking is easier. A handy feature because Patrol is a huge vehicle designed very much for the American market and can be a handful at times in Australians carparks.

The Nissan Patrol has a large 5.6-litre V8 petrol engine that’s unchanged from the superseded Patrol. It produces 298 kW of power at 5800 rpm, and 560Nm of torque at a very high 4000 rpm. A seven-speed automatic with manual mode can be used in Auto, 4-high and 4-low capabilities.

Hydraulic Body Motion Control (HBMC) suspension system, providing the driver and occupants with a comfortable ride and handling experience on all surfaces.

Facelifted Patrol will reach Australia before the end of the year. Pictured here is USA model, called the Nissan Armada. There are no shots of Australian Patrols yet, Nissan Australia says ours will have a different grille.