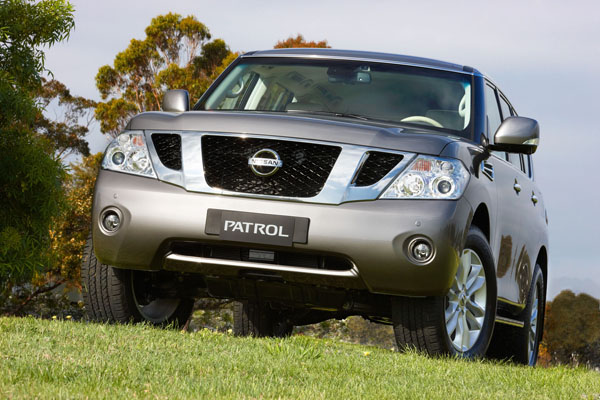 Nissan Patrol is a genuine 4WD, with body-on-chassis construction for maximum strength in real off-road conditions. Patrol has been a solid seller in the Australian bush for many years and is favoured by those doing heavy-duty towing – large caravans, horse floats, big boats and the like.

These big Nissans are bulky and aren’t the easiest vehicles to drive around the city and the inner suburban areas. Parking can be a nightmare at times. Outer suburbs are fine and obviously they’re in their element in the country, and more than happy way out Back ‘O Bourke.

As always check seating for yourself with all available travellers along for the test drive.

Interestingly, we will examine two different versions of the Patrol in this review. That is the last of the GU Patrols, sold from the 2004 update until it’s disappearance in the second half of 2016.

We also review the significantly more modern, and even larger, Y62 Patrol that was sold in Australia alongside the GU from 2013. Incidentally, what we Aussies call the Patrol GU is named the Patrol Y61 in other markets. So the Y62 is a direct descendant, albeit with an almost clean-sheet design. Though Patrol GU series was improved several times over the years it may not suit those who want the looks of a macho people mover rather than a genuine off-road wagon.

The Nissan Patrol received a major upgrade in October 2004 and tagged as GU Series 4. Virtually every panel changed, though it maintained the same overall ‘tuff’ body shape. Inside the GU4, the dash and instrument panel were modernised and trim and upholstery lifted to a higher quality to give a more upmarket feel.

It was a little more refined in its ride and overall comfort and those who like genuine off-road GQ and GU Patrols love it.

The virtually all-new Y62 Patrol was launched here in February 2013. Designed for the North American market it is a huge 4WD that can transport lots of kids and their stuff without even looking crowded inside. It’s more comfortable than the GU thanks to its more refined suspension.

Because the Americans aren’t keen on diesels the Y62 is only built with a petrol engine, the older GU continued to be imported as a diesel.

Patrol GU had a 4.8-litre six-cylinder petrol engine until the Y62 was introduced, then it was discontinued.

The petrol V8 in the Y62 Patrol displaces 5.6 litres and is a modern design. However, it’s hauling a large vehicle and is not exactly an economy unit.

The 3.0-litre turbo-diesel engine used in the GU4 was significantly improved over the previous unit and provided more power and torque while using less fuel.

Originally the 3.0-litre TD had been sold alongside the 4.2-litre naturally-aspirated diesel and its cousin the 4.2-litre turbo-diesel. But these were discontinued in 2006, making the 3.0 the only diesel.

Nissan Patrols are easy to work on, with plenty of underbonnet and under-vehicle room. Servicing and spare parts costs are generally reasonable and the dealer network is well represented in all areas of Australia.

Insurance costs are usually relatively low but there can be a fair variation so it pays to shop around. Make sure you make the comparison as accurate as possible.

WHAT TO LOOK FOR
Few Y62 Patrols are taken off-road, being typically family station wagons, if you come across one it may be best to skip it – unless the price is right.

Look over the complete interior, including the load area for signs of harsh treatment from the kids or poor cargo loading by the adults.

It’s important that turbo-diesels are serviced according to the schedule, if not may problems could be on the horizon.

CAR BUYING TIP
Big cars often spend a lot of their time in country running. This is easier on them than the eternal stop-start of city driving, but beware one that has spent most of its life on unsealed surfaces.