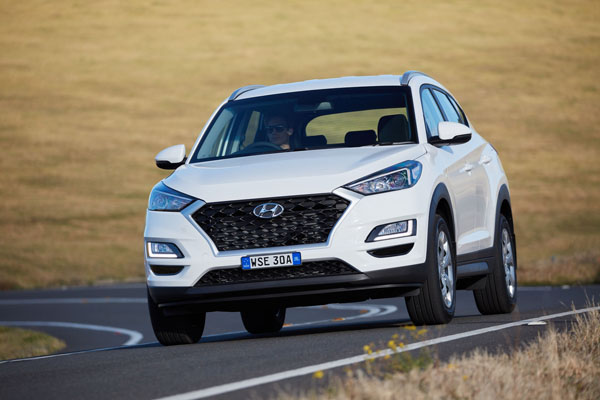 Such is the competition in the mid-SUV market that treading water is just not enough. If constant improvements are not made to technique and endurance, then ultimately the race will be lost.

Hyundai, fresh from the splash created by the new Santa Fe and Kona, have given the Tucson a little midstream boost. The changes are restrained and minimal but may be enough for the Tucson to stay with the pace-setters.

We took the entry-level Tucson Go home for the week to put it to the family test.

STYLING
A new black honeycomb grille with a splash of silver is the most obvious of changes on the outside of the Tucson Go. The light inlays, both front and back, have changed too with the entry-level model having to make do with halogen bulbs in lieu of the LEDs available to the rest of the range.

A new rear bumper and redesigned tailgate round off the external nip and tuck to not only move the Tucson in line with the Santa Fe and Kona but to also establish a more complete modern look.

Changes to the interior have also been kept to a minimum with Hyundai opting for functional improvements and an overall value package. 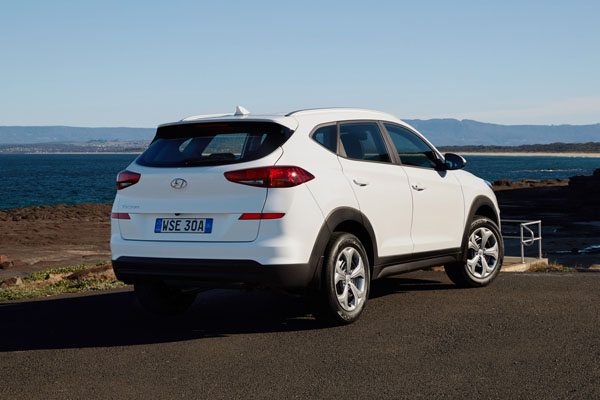 The 7.0-inch tablet-like infotainment touchscreen now sits perched atop the dash instead of being ensconced within it. It is easy to see with a quick movement of the eyes and the screen itself has good resolution and seems to escape the glare of the sun. Other models in the range get a bigger screen with digital radio and in-built satellite navigation.

We like that the climate control dials are separate from the infotainment system which means they are easy to change on the run.

Materials in the cabin have changed with the Tucson offering better-feel plastics, a more cohesive fit and presentation and in the case of the Go, cloth seats that are well made and expertly finished.

The seats offer width for shoulders and are long enough under the thigh to be comfortable while the shaped cushions give support in all the right areas.

There is room for heads, feet and toes with the back easily able to accommodate three teenagers or two bigger adults in real comfort. The outboard rear seats have IsoFix points and there are three top tethers if you need to fit the kids’ car seats. 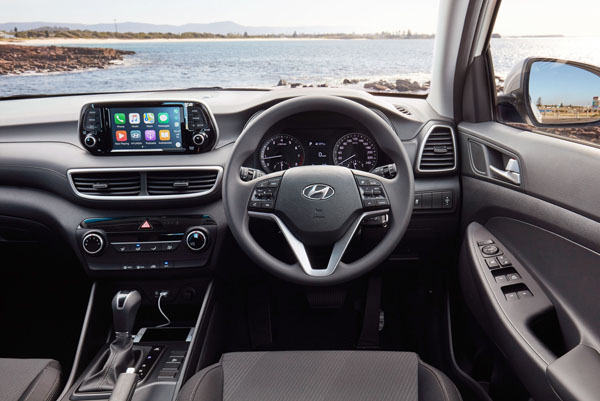 There are no rear air vents in the base model, nor a USB point, which seems a trifle petty.

Storage remain unchanged with four cupholders, a place for water bottles in the doors and handy compartments for your bits and bobs. The boot (488L) offers a good shape and dimensions with a flat floor and wide opening.

It will take a pram and a few grocery bags at the same time and will do well with the school bags too. You will have 1487L with the rear seats folded flat which is useful if you need to transport larger items – without the kids of course.

INFOTAINMENT
As mentioned above the Tucson Go comes with a 7.0-inch touchscreen media system with six speakers, Bluetooth connectivity and a reversing camera. Smartphone mirroring gives you access to satellite navigation through your phone, as well as your favourite apps.

The infotainment system itself is quite intuitive and easy to navigate but annoyingly, the voice command function is only available if you phone is paired via cable. There is a single USB and auxiliary connectivity for external audio devices.

ENGINES / TRANSMISSIONS
With three engines, four transmissions and four specification options across the Tucson range, buyers are certainly spoilt for choice. Our Tucson Go (from $30,650) featured the 2.0-litre, four-cylinder petrol engine paired with a six-speed automatic transmission with drive to the front wheels.

This unit produces 122kW of power at 6200rpm and 205Nm of torque at 4000rpm, which may not get the pulse racing but is perfectly fine for the city and suburbs.

The Go is also available with a manual transmission for $2500 less and with a 2.0-litre diesel engine and eight-speed automatic transmission from $35,950.

There is no Autonomous Emergency Braking in the Go although it is available across the other variants in the range.

DRIVING
The Tucson is an easy unfussy drive and that in reality is one of its main strengths. Local engineers have tuned the SUV for Australian conditions which has resulted in a drive that offers compliance without the wallow.

This means that there is comfort over bumps and irregularities but enough feedback from the steering wheel to make you feel that you are indeed connected to the car.

The Tucson Go navigates tight confines well, is affable when parking with good manners when performing everyday tasks. It doesn’t react instantly from standstill and can be a tad sluggish when gathering speed but settles down when it finds its stride.

The 2.0-litre petrol engine is not the best for long or steep hills especially under load and will whine its way to the top so if this terrain features in your daily commute we would suggest the 1.6-litre turbo or the 2.0-litre diesel is a better bet.

Obviously, this is not a car to beat around the corners or push through at speed – few SUVs are – but it is nicely balanced despite its height, will change direction without fuss and will get you and your family to your destination without quibble.

Hyundai offers a five-year unlimited kilometre warranty which is good given the company’s great reputation for customer service but not as trend-setting as it once was.

Hyundai does have capped-price servicing schedule for the life of the vehicle with service intervals at 12 months or 15,000km.

SUMMING UP
This is a competent easy-going SUV that has the versatility to serve you well. While the fit and finish and good use of new materials made the entry-level Go feel comfortable beyond the price-tag, the enjoyment may have dimmed without the addition of the SmartSense safety pack. Having some of those features as standard, particularly AEB, will certainly sharpen the value proposition.

WHAT WE DIDN’T:
Lower grades miss out on AEB
2.0-litre petrol lacks power
Voice command through plug-in only