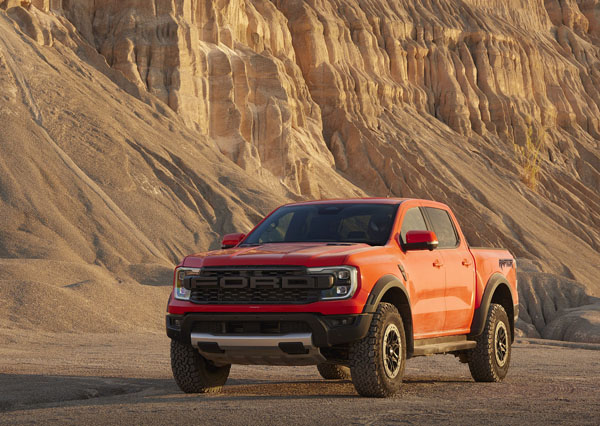 The Next-Generation Ford Ranger Raptor has arrived. Ford tells us it’s; “Designed and
engineered to dominate in the desert, master the mountains and rule everywhere in
between, the second-generation Ranger Raptor raises the off-road performance bar as a
pick-up built for true enthusiasts.”

Raptor’s anti-lag system – available in Baja2 mode – keeps the turbochargers spinning for
up to three seconds after the driver backs off the throttle, allowing for faster resumption of
acceleration out of corners or between gears when the driver gets back on the accelerator.

Mated to a 10-speed automatic transmission with each gear programmed with its own
boost profile. An electronically controlled active valve exhaust system amplifies the engine
note in four selectable drive modes (Quiet, Normal, Sport and Baja2).

Drivers can choose their preferred engine sound by pressing a button on the steering
wheel, or by selecting a drive mode that uses one of the following settings:

Quiet – Designed to prioritise low-volume over performance. Great for keeping the peace
with neighbours on early mornings.

Normal – Intended for everyday use, this profile offers an exhaust note with presence
while not being too loud for street use. This profile is applied by default to Normal,
Slippery, Mud/Ruts, and Rock Crawl modes. 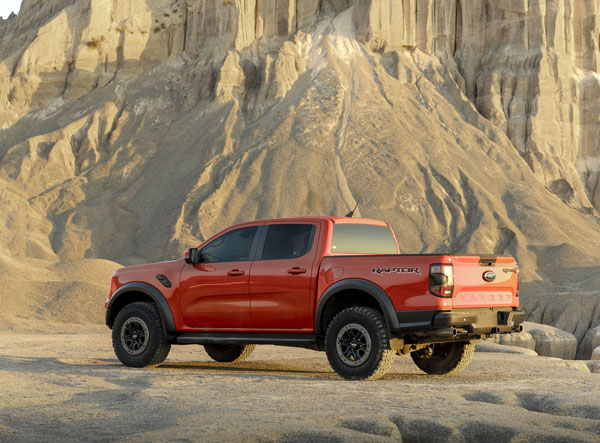 Sport – Offers a louder and more aggressive note, for when you want to shake things up a
little.

Baja2 – This is the most aggressive of the exhaust profiles in both volume and note and is
intended for off-road use only.

Next-generation FOX 2.5-inch Live Valve Internal Bypass shock absorbers are filled with
Teflon-infused oil that reduces friction by around 50 percent compared to those on the
previous Raptor.

While the suspension hardware is from FOX, the tuning and development work was
carried out by Ford Performance using a mixture of computer-aided engineering (CAE)
and real-world testing.

In addition to working with the drive modes, the system works in the background to
prepare the Ranger Raptor for different conditions. As the shocks compress, different
zones within the bypass system give exactly the amount of support needed for the travel
being used, and work in reverse as the shocks rebound to full height.

To provide protection against severe bottom outs, FOX’s Bottom-Out Control provides
maximum damping force in the last 25 percent of shock travel. The system can stiffen the
rear dampers to prevent Raptor from squatting under hard acceleration.

Made from 2.3mm-thick high-strength steel, the front bash plate is almost double the size
of the standard Ranger bash plate. This bash plate, combined with the engine under shield
and transfer case shield, provides protection for key components like the radiator, steering
system, front cross member, engine sump and front differential. 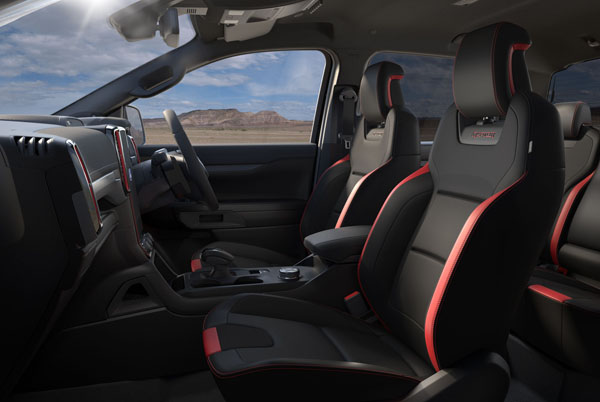 “Everything designed for the Next-Generation Raptor is there for a reason,” said Dave
Dewitt, Ranger Raptor Exterior Design Manager. “We’re communicating what Raptor can
do just by the way it looks.”

The cabin features jet fighter-inspired sports seats front and rear. They are sad to be not
only more comfortable but also more supportive during spirited cornering.

Code Orange accents on the instrument panel, trim and seats are enhanced by Raptor’s
ambient lighting, which illuminates the interior in an amber glow. A leather sports steering
wheel with thumb swells, on-centre marking and cast magnesium paddle shifters
completes the picture.

Compatible smartphones can be wirelessly charged via a pad at the base of the centre
console. Ford says, “A Bang & Olufsen sound system provides the soundtrack to your next
adventure.”