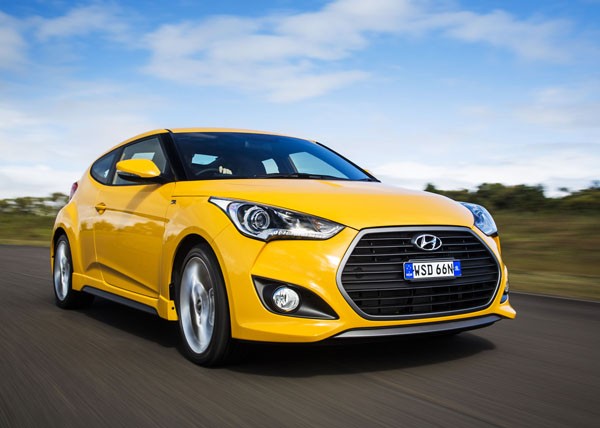 Hyundai has launched a midlife update of its Veloster sports hatch with most of the changes being applied to the SR Turbo model including a higher spec variant, seven-speed double-clutch transmission, tweaked suspension and the option of a new matte finish exterior paint.

Four models are now offered, one more than before: Veloster, Veloster Plus, SR Turbo and the new SR Turbo Plus. Prices of the first two are unchanged at $24,490 and $29,490 respectively however $3000 has been lopped from the SR Turbo bringing it down to $29,990 while the new SR Turbo Plus is $33,990. Automatic transmission adds $2500 across the range.

STYLING
Importantly, the Series II Veloster still looks the same, which makes sense because, even though it’s been around for three years, the sporty little Hyundai is still one of the most eye-catching cars on the road. It looks great from every angle, especially the rear – which, after all, is the view that most other road users (and potential buyers) get of any car.

One feature that we would have liked to have seen changed is the relatively conservative front grille on the Veloster and Veloster Plus which suffers in comparison to the large, open-mouthed opening in the SR Turbo models. Side skirts give the SR a squatter look while the dark glass sunroof adds to the overall effect – especially if the black glass contrasts strongly with one of the bolder paint shades.

While the new Blue Sprinter exterior colour may not be bold it does catch the eye because it has a matt finish – a nice change from the gloss sheen that’s used in just about every other car on the road. We love it.

The rear passenger door (yes, there’s still only one) retains the ‘hidden’ handle that gives Veloster a coupe-like appearance. While the single rear door is a bit of a gimmick it does have a safety element in that passengers can only enter from the kerb side of the car rather than the riskier road side. All Veloster models also get LED daytime running lights that further enhance the car’s appearance but also make it more visible.

All these little things add up to increased safety.

ENGINES / TRANSMISSIONS
Engines are unchanged from the Series I Veloster with two 1.6-litre petrol units, one naturally-aspirated, the other turbocharged. The standard engine generates 103 kW at 6300 rpm and 167 Nm at 4850 revs. The turbo increases power by 46 per cent, to 150 kW, and an even more impressive 60 per cent increase in torque to 265 Nm that’s reached at just 1750 rpm and continues through to 4500 revs.

Transmission options are six-speed manual with either engine and double-clutch (DCT) six-speed with the standard engine and a new seven-speed DCT with the turbo. Both DCTs come with paddle shifts.

INTERIOR
Unlike some of its rivals that are really two-plus-twos Veloster is a genuine four-seater. Leg room is reasonable even for a pair of adults although they will suffer from the usual coupe issue of limited headroom.

Front headroom is fine in the standard Veloster although taller occupants in the SR may have to partially open the sunroof blind to allow extra space. Hardly a criticism though – this is a semi-sporty car and these are the compromises that you expect to make.

The dashboard manages to combine a curvaceous design with well-positioned and logical controls. The steering wheel has the usual selection of audio, telephone and cruise control buttons.

The entry-level Veloster uses a traditional key ignition, all other models have a proximity smart key with pushbutton start. Likewise with leather-appointed seats.

INFOTAINMENT
A 7-inch LCD touchscreen controls the usual infotainment features that include a premium audio system; rear-view camera; and satellite navigation (Plus models only). USB and Auxiliary sockets are located at the lower end of the dashboard and easy to access.

Bluetooth phone and audio is standard across the range with pairing simple and logical.

DRIVING
While many, perhaps most, buyers will make their decision based on the distinctive looks of the Veloster there’s plenty of driving fun to be had especially from the SR Turbo. We were able to spend a couple of hours on a closed road circuit with plenty of challenging corners and we had a ball pushing the car to its limits.

It isn’t up to the performance standards of the Toyota 86 / Subaru BRZ twins but has got a little closer through a number of suspension enhancements that have refined the Veloster’s steering, ride and handling.

SUMMING UP
Ever since it arrived in Australia in February 2012 Hyundai Veloster has grabbed attention. Initially it was about its excellent value; stunning looks; and of course the missing rear door. The arrival of the turbo engine diverted attention to the significantly improved performance.

The combination of all of these factors has made Veloster a real sales success for Hyundai as it continues to bear down on the number two spot in Australian overall vehicle sales. With the Series II Veloster model increasing both value and driving enjoyment there’s no doubt this will continue.