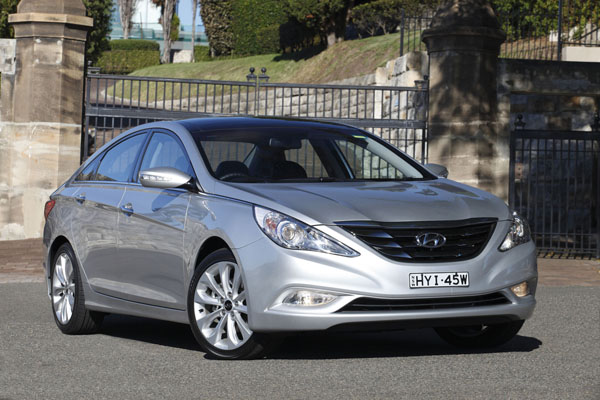 South Korean car makers started off in the cheap n’ cheerful section of the car market but having gained solid foothold began to move up a grade or two.

Hyundai was one of the leaders and its i45 moved it up to the medium-large sedan segment. Particularly in style, its swooping curves were at the outer edge of design when it was launched in May 2010. It has proven timeless, still looking stunning to this day.

Quality of build is impressive. Inside and out the i45 is right up with the best of the Japanese, perhaps even the midrange Europeans.

The Hyundai i45 was launched in Oz in three models, the i45 Active, i45 Elite and i45 Premium.

It has good legroom and it’s possible for four adults to travel in comfort, five without too much of a squeeze. Boot size is pretty good, though the coupe-like rear end does make it hard to cart bulky objects.

Hyundai i45 has a refined feel when cruising and the suspension generally copes well with Australian road conditions, though some poor surfaces can knock it around at time.

It was criticised at its Australian launch for feeling too soft in corners – not a surprise when you consider it was aimed very much a the American market. Never a company to brush off criticism as ‘journo-talk’, in October 2010 Hyundai gave us an i45 with upgraded suspension which improved the feel car by a fair margin.

It still isn’t exactly a sports sedan, so try for yourself if you consider yourself as being a keen driver.

That update for the 2011 MY also saw Bluetooth communication, satellite-navigation and heated front seats added to the Hyundai i45 Premium.

A 2.0-litre was sold only in the i45 Active and only with a six-speed manual gearbox. The 2.4-litre direct-injection petrol engine sold in all models is happy to rev and even provides quite a nice note. It sits beside a six-speed automatic transmission and was the choice of almost all buyers in this class.

The auto has a sequential manual override function, giving drivers extra control if they reckon the auto’s computer has got it wrong. 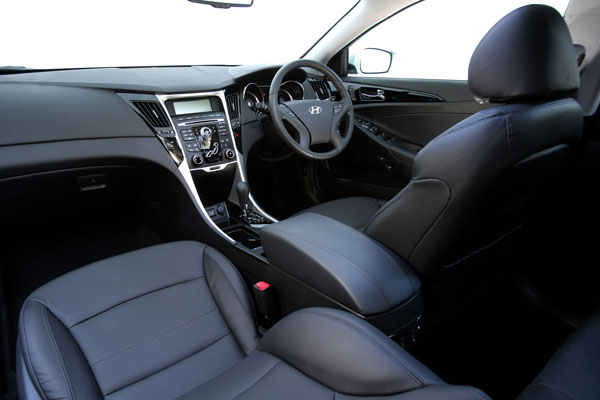 After a slightly odd beginning in Australia – Hyundai was once sold only in West Australia and entrepreneur Alan Bond was heavily involved – the South Korean has expanded rapidly. It now routinely runs in the top four in overall sales in this country.

As a result there are plenty of dealers Australia wide, with quite a few in country cities.

Spare parts and servicing costs are about average for this market segment. We’ve heard of no ongoing complaints about parts availability.

A good amateur mechanic can do some work. Be sure to go to the professionals for anything that will affect safety.

Insurance is also in the mid range brackets, with no major changes in premium charges from company to company.

Hyundai models in this category in Australia have a habit of chopping and changing. In 2010 the i45 had replaced the Sonata, it only lasted till early in 2013 when it was discontinued and sort-of replaced by the Hyundai i40. Somewhat oddly the i40 had been sold alongside the i45 for quite a while on the new car market.

WHAT TO LOOK FOR
Check the service book is up to date.

A recall for engine oil-starvation problems on some early 2.4-litre Hyundai i45s should have resulted in the modifications by dealers. Look at the car’s service book or contact Hyundai’s head office.

It also makes sense to check the dipstick to be sure there’s sufficient oil in the engine.

The engine should start easily and idle smoothly from the moment it fires up. Ideally this test should be done with the engine stone cold. Early morning is the obvious choice.

Boot space is quite hard to access so check for signs of biffs and scratches on the surrounds of the opening.

The automatic transmission should be smooth and easy when moved from Neutral to Drive or Reverse. gearchanges should be all but unnoticeable in normal driving.

In the unlikely event that a Hyundai i45 has been owned by a revhead check the condition of the tyres, particularly the fronts, for signs of uneven wear and a sawtooth effect.

CAR BUYING TIP
Make a slow walk around any car you’re considering looking for obvious defects. It amuses us how many people dive into tiny details – only to discover a major ding somewhere on the other side of the car.