Peugeot is finally back in the hot-hatch business after an absence of almost 20 years. Sure there have been Peugeots with ‘GT’ on their badges in the intervening years, but they were on the tame side when compared with an ever increasing number of rivals from Europe and Japan.

The eagerly awaited Peugeot 308 GTi has finally arrived in Australia – and it’s a real belter. Stylish, but not overdone, ‘understated aggression’ is the phrase that comes to mind, it’s powered by an exceptional turbo-petrol engine that drives through well-controlled front wheels, and chassis dynamics that sit with the best of them.

Peugeot 308 GTi is heavily modified from the original by Peugeot Sport, a division with a lot of credibility in tough events such as the Dakar rally and the Pike’s Peak hillclimb.

It has always seemed odd to us that the country that invented the metric system still uses imperial units for engine power (perhaps because horsepower results in bigger numbers than kilowatts?) The metric power is 184 kW and 200 kW. 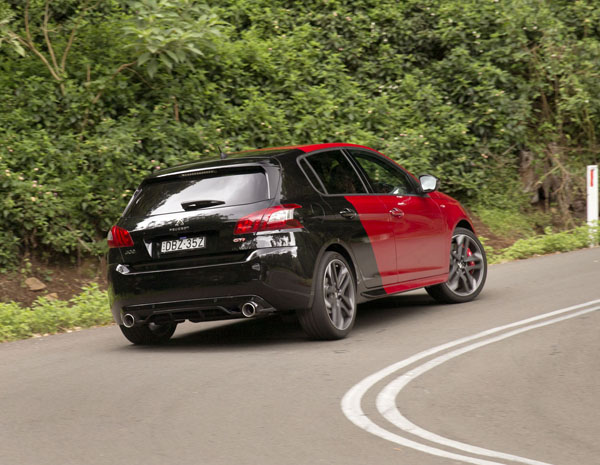 Torque is more important than power in real life and both versions of the engine develop peak torque of 330 Nm from just 1900 rpm.

Peugeot GTi comes with a slick shifting six-speed manual transmissions. Want an automatic? Tough luck, there isn’t one. Peugeot neither confirms nor denies working on an auto, but surely a sporting dual-clutch unit is on the drawing boards?

The 250 engine has a respectable zero to 100 km/h acceleration time of 6.2 seconds. It must frustrate the engineers that the 270 just misses out on the five-second bracket, stopping the same clock in a flat six seconds.

Part of the added expense of the GTi 270 is the use of a Torsen limited-slip differential. It channels torque to the wheel with the best grip, rather than braking the wheel that’s spinning as happens in many other systems. The 270 has a sportier ESP (Electronic Stability Program) that allows more latitude. The ESP can be fully disconnected, though this is only recommended for use on track days.

In fact, Peugeot says the 250 is aimed at the person looking for a sportier feel in daily driving, while the 270 is there for track use. 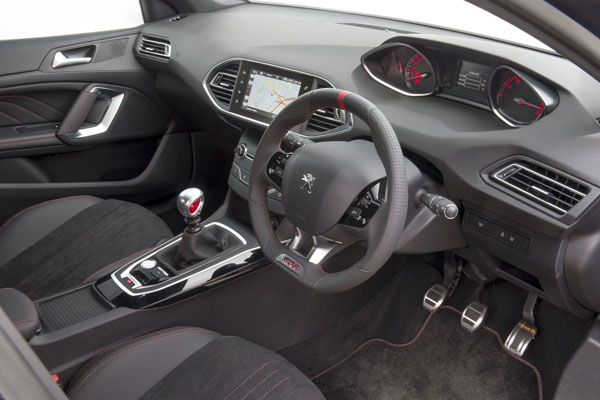 Both Peugeot GTi models sit 11 mm closer to the road than the standard 308, the GTi has a wider track of 1570 mm at the front and 1554 mm at the rear. Redesigned skirts hint at the sporty Peugeot’s no-nonsense nature. The rear features a gloss-black section incorporating twin exhaust pipes. The GTi signature is repeated on the front guards and tailgate.

Pressing the Sport button on the centre console switches the instrument display from white to an angry red, it shows additional information on the central read-out (power, torque, boost, lateral and longitudinal acceleration).

Changes to the mapping of the accelerator pedal give the GTi 270 plenty of mongrel.

Perhaps best of all, using Sport enhances the engine’s throaty growl. A little more volume would be appreciated, but the quality of the sound is excellent.

We did 400+ kilometres of driving over two days out of Hobart, Tasmania and were very impressed with the way the new Peugeot GTi works dynamically. Road roar on coarse-chip surfaces is quite pronounced, but on smoother roads the hot-hatch settles down into cruising mode and can carry you long distances with ease thanks to the well known ability of the French to combine handling and comfort.

Track work was carried out at the Baskerville circuit, but sudden showers created nasty damp areas in some of the hollows. The sun scorched the water off the surface at times … then the rain arrived again. Taking the car to no more than eight tenths under those difficult circumstances gave us a good feel of the hot French machine, but one day we might be able to put it to a full-on track work. Stay tuned.

Peugeot’s all-new 308 is an excellent machine in all variants we have driven in France, Switzerland and now Australia. The GTi, tested only in our home country, showcases the brilliant design of the new modular platform. If you have any interest at all in a small-medium high-performance car the 308 GTi deserves a spot high on your short list.