NEW AUDI A4 HAS BEEN WORTH THE WAIT 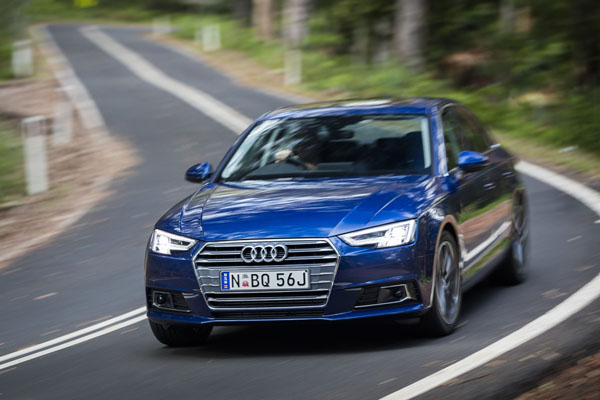 Audi’s A4 has just entered its fourth generation but if you poke around you’ll see that it’s known as the B9 – the ninth-generation of the four rings’ B-segment offering, stretching back to the early 1970s starting with the first Audi 80, sold here as the Fox.

The old car, released way back in 2008 was still selling strongly right up to the death, owing much to its understated good looks and value proposition, helping Audi to a record year in 2015. But underneath it was getting on a bit and the cabin was lacking many of the toys of not only other Audis but – crucially – its competitors. The B9 is also spun off the VW Group’s MLB Evo platform which has already produced the acclaimed second generation Q7.

The new range debuts with three petrol engines – a 1.4-litre and two 2.0-litres – and a sole 2.0-litre turbodiesel. The 1.4 is included in the Australian A4 range for the first time. There’s also a huge list of new goodies to part you and your cash. 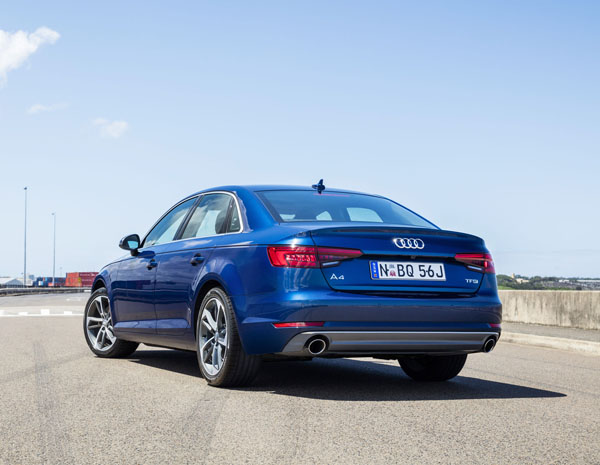 The new entry level 1.4 is $1500 cheaper than the outgoing entry level 1.8. Audi says the equipment level is higher to offset the performance penalty. The old A4 range had a big gap to the 2.0 TFSI Quattro which is now filled by the 2.0 front-wheel drive model. The two Quattro models (Audi expects the petrol Quattro to be the big seller) are both slightly more than their predecessors, but have a lot more gear as standard, most obviously safety-related.

There wasn’t any pricing available for the wagon Avant, which is expected here before the middle of the year. 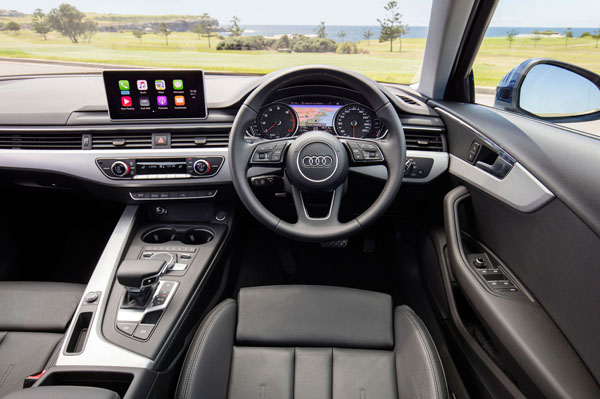 There are tons of options from which to choose, but as ever, Audi helpfully groups them together into packages. The $1900 Assistance Package adds Active Lane Assist, adaptive cruise control with stop and go and traffic jam assistant, distance indicator and pre-sense front (helps you to avoid having a crash and prepares the car for one if it’s inevitable), turn assist (tries to stop you turning in front of oncoming traffic), collision avoidance and high beam assist.

The Technik Package adds Audi’s sensational virtual cockpit and heads-up display. The Virtual Cockpit is lifted from the TT and Q7, a 12.3-inch fully digital display run by a powerful NVIDIA graphics card.

The S-Line Sports package is almost completely cosmetic with leather/alcantara trim, S-Line 19-inch alloys, sport suspension (if it’s not already fitted), S-Line exterior and interior bits and bobs and a few other extras. The price differs across the range, starting at $5200 on the 1.4, $5000 for the 2.0 140kW and $3200 for the TDI and TFSI Sport.

There’s also the Parking Assistance Package with plenty of auto-parking tech ($950) and S-Line which adds lots of styling aggro and varies in price depending on the wheel size you choose.

The two adaptive suspension options differ in both the aggressiveness of the dampers and in ride height. Comfort lops 10mm off the steel suspension’s ride height while being biased towards a comfortable ride experience while the sport version drops the car 23mm and is more aggressive on the damper settings.

On the safety front, all cars have eight airbags, with the last two being side airbags for the rear passengers. All A4s also have exit warning, a nifty feature to warn you of cars and cyclists approaching from behind.

The new car looks quite similar to the preceding B8, but is considerably sharper and, like the TT, has some terrific detailing. It’s noticeably tougher looking from the front with a lower, wider grille and lots of horizontal design elements to widen and lower the look. It’s 25mm longer with an extra 12mm in the wheelbase but no increase in height. The extra length and wheelbase delivers 23mm more rear leg rom while a 16mm wider cabin brings a bit of extra shoulder room. The new platform also means 24mm more front head room.

Inside is all-new, with a new, sleeker borrowing most heavily from the new Q7’s cabin. A big blade of aluminum makes the dash looks like it’s floating and everything is slimmer and less imposing. Materials are yet another improvement over the older car, with plenty of interesting textures across the different models, particularly the metal finishes.

The new dash comes in two flavours – familiar Audi tear-drop shaped dials with a six-inch centre screen like the A6 or the fully digital virtual cockpit. The virtual cockpit is configurable, either in a classic view of normal sized dials or at the press of a button, these shrink to give you bigger real estate for entertainment or sat-nav. For bonus points, you can use the standard Audi connect to get a Google Earth overlay.

The new 8.3-inch dashtop screen brings an updated version of MMI but also has both Apple CarPlay and Android Auto. Plug your phone in to one of the two USB ports (the old car had precisely zero USB ports and you had to use a ridiculous proprietary cable) and your phone’s interface becomes available on the screen with apps like texting, music and Spotify selectable through the MMI’s rotary dial.

If you’re not quite prepared, plugging in an Android phone is an exercise in immense irritation – the phone asks about a billion questions, downloads a series of updates and just makes life hard. The Android Auto interface is half-cooked, too (not Audi’s fault), so hopefully this improves as time goes on. CarPlay is light years ahead and relies far less heavily on voice commands.

There’s plenty more to talk about, too, and we’ll cover this on longer road tests.

With the exception of the 1.4, the new engines are all more powerful than the ones they replace and with around a claimed ten percent drop (roughly 0.5L/100km) in fuel economy depending on the engine.

You can have any transmission you like as long as it’s the seven-speed twin-clutch S-tronic.

On the road, it’s immediately apparent that all these changes big and small have had a huge impact on the A4. In the first hundred metres the ride and steering stand out as being much improved with better weight through the wheel and a far more composed attitude, no matter which setting you choose on the adaptive damping.

We didn’t get a long enough run in the standard-sprung car, but it too felt to be a huge improvement. All cars benefit from a significant improvement in body control and the heaving and crashing on bad surfaces that blighted the B8 has been all but eliminated. The Quattro cars with all the nannies left on can be conducted at indecent pace on sealed and unsealed surfaces without drama.

The new B9 A4 is a huge leap forward, as it should be for such an important car that has been such a long time coming. While there wasn’t a whole lot wrong with the old car, it just wasn’t up to speed in the interior, dynamics, technology or engine department. The new four-car range is also competitively priced and well-equipped while also reasonably frugal.

Audi had a big year in 2015 and is planning on chasing down Mercedes and BMW with this new car. Game on.