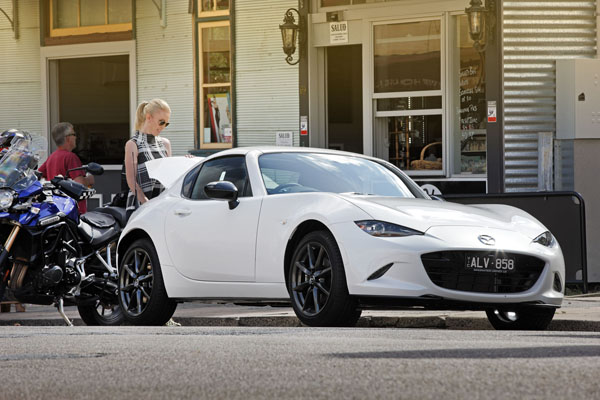 Mazda has introduced a limited edition to its MX-5 RF retractable fastback range. It is priced at $55,748 driveaway and is on sale now. Only 110 have been produced for Australia and these are moving out of the dealerships fast.

The MX-5 RF Limited Edition is offered in Soul Red Crystal Metallic, Machine Grey Metallic, Snow Flake, White Pearl Mica, Ceramic Metallic and Eternal Blue Mica. Our test car was a white one – pity because we really have fallen in love with the Soul Red that has taken Mazda sales by storm.

STYLING
This is no dressed up toy that’s all show and no go. It’s a serious machine with changes to the body, suspension and brakes. New design 17-inch BBS alloy wheels in an attractive new design are part of the deal.

Major features are based around the Mazda Kuroi Sports Pack with aerodynamic additions that see small winglets near the front of the wheelarch openings. These direct air away from the wheels and along the sides of the body to smooth out the rush of air and improve speed. A front strut bar links the front suspension towers to increase chassis stiffness.

Want a Mazda MX-5 with an automatic transmission because you can’t be bothered changing gears yourself? Tough luck – this Edition only comes with the lovely slick-shifting six-speed manual.

DRIVING
Handling is sharp and feedback through the wheel and the seat of your pants is excellent. You can control it on the throttle to really balance it beautifully in bends and it simply cries out for an interesting series of tight twisting up-hill-and-down-dale roads.

As a naturally aspirated unit the engine has the near instantaneous throttle response that’s simply not there in even the best turbocharged units.

There’s a fair bit of road noise on rough n’ ready Australian backroads, but we’ve hard worse in similar sporty cars. In any case, hearing the road under you is all part of the fun.

Brembo’s opposed-piston, four-pot front brake calipers not only provide harder braking in heavy duty use, but also reduce unsparing weight by a significant two kilograms. The Brembos can increase fade resistance by as much as 26 per cent. A significant advantage if you want to take part in track days.

The roof can be powered open and closed at speeds of up to 10 km/h. It consists of front, middle and rear roof sections and rear window glass. When the roof is opened, the front and middle roof sections are stowed together with the back window glass in the space behind the seats. 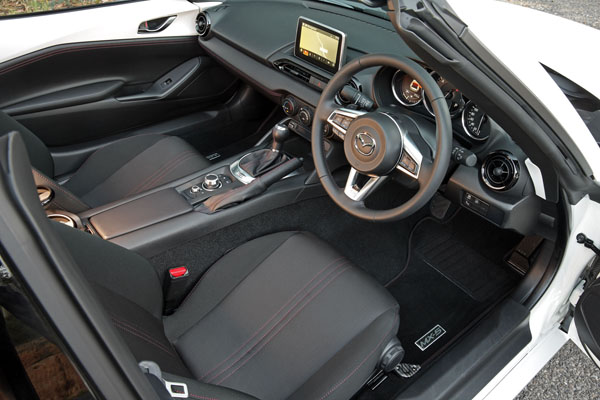 No boot space is lost so the volume remains at 130 litres, which is enough to hold two carryon aircraft bags.

SUMMING UP
The Mazda MX-5 RF is delightful little sports coupe with an opening roof that turns it almost into a convertible. This special edition is a fair dinkum one with real changes to its suspension and brakes that will please those who want to get serious in their driving – particularly on their early Sunday morning runs.

AT A GLANCE
Mazda MX-5 RF Limited Edition two-door convertible: $55,790 (manual)
Note: This price does not include government or dealer delivery charges. Contact your local Mazda for drive-away pricing.

CAPTION: Cost of luxury is cut for the popular Lexus NX 300 turbo SUV with a 2WD version

BODY COPY
As luck would have it recently got a second bite of the Lexus NX 300 and it tasted just as pleasant as previously. Earlier this year there had been the NX 300 F Sport AWD; now it was the NX 300 turbo 2WD’s turn.

While updating the contemporary design, driving dynamics and luxury features of its best-selling model, for 2018 Lexus has also added two-wheel-drive variants to the F Sport for buyers who want the aggressive styling and sportier tuning at a more affordable price.

Petrol-electric hybrid versions are also on offer across the board from $57,300 on the road, while two enhancement packages add such features as moonroof, colour head-up display, smart key card and 14-speaker Mark Levinson audio at a cost.

Dark chrome plating defines the grille frame, as used on RC F, while a new F mesh pattern is interwoven downwards through the grille, for a 3D effect.

Sports grades have Lexus LC inspired triangular automatic high-beam switching headlamps with three LED low beam and 11 LED chip high beam, plus sequential indicators, with 16 LEDs per side at the front and six at the rear.

INTERIOR
All F Sport models now have black rear-seat trim, regardless of the interior trim selected. Ornamentation has been spruced up throughout, including satin plating, metallic paint and chrome plating in key areas. Stitching style is new.

The interior facelift saw special attention paid to the centre cluster, with the navigation display enlarged to 10.3 inches (from 7.0in) and the number of switches cut for easier use.

In addition, the button design has been modernised and the analogue clock redesigned with increased contrast between the hands and background for ease of viewing. The clock is now linked to GPS, so the time is set automatically.

The centre console remote touch pad has an increased surface area, integrating the palm rest into the overall design and making the pad flatter for greater comfort.

A sub-switch calls up a screen with related functions, such as air-conditioning and navigation. The Drive Mode Select switch has been enhanced by adding an L-shaped serration to the rim.

ENGINES / TRANSMISSIONS
The NX 300 has a turbo-petrol 2.0-litre in-line four-cylinder engine, putting out 175 kW of power and 350 Nm of torque. It’s mated with a six-speed automatic transmission and front-wheel drive, the latter in a bid for fuel savings over the all-wheel-drive variant.

DRIVING
The Lexus NX 300 F Sport turbo 2WD has everything its AWD sibling has, except the ability to shift front / rear torque split from 100:0 to 50:50, according to driver intention, vehicle condition and available traction.

Our test 2WD vehicle recorded and average of 10.2 litres per 100 kilometres in city stop-and-crawl driving and 6.8 under free rein on a motorway run.

Not surprisingly, the 2WD NX 300 does share with its all-wheel drive two distinct ‘Dr Jekyll and Mr Hyde’ characteristics. With Drive Mode Select in Eco the NX 300 F Sport was decidedly low on ‘sport’, the car being slow to react to accelerator pedal pressure. A turn of the switch to Sport freed up the performance, while stiffening the ride, though not uncomfortably. Much preferred.

Annoying finger prints on the touch screen are a thing of the past, with the control pad situated on the centre console. It took time for me to master the ultra-sensitive touch pad. Left-hand operation was an added impost for this right-hander. I hankered for the old joystick.

SUMMING UP
It would be difficult to see the luxury Lexus NX 300 being put into tricky situations where all-wheel drive offers a great advantage over the 2WD version, so it might suffice to save on buying price and cost of fuel. Then again, as they say, better to be safe than sorry.