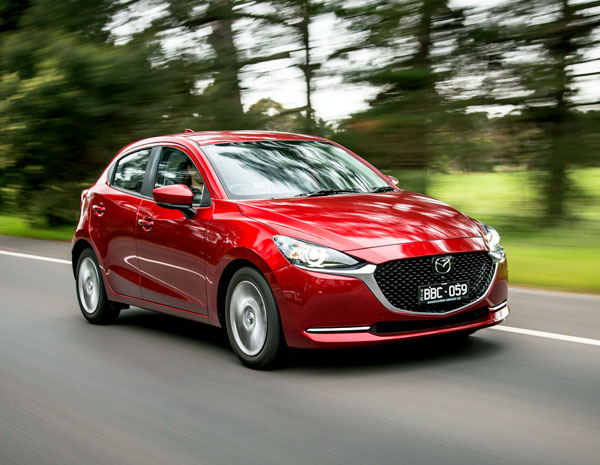 The Mazda2 has always been a small car with big ambitions. So much so that it has notched up sales of 196,000 since it hit the streets in 2002. Nothing has changed in this respect.

However, in order to maintain pressure on rivals in one of the most competitive market segments, the latest model has refreshed looks inside and out, and perked up the powertrain to improve ride and fuel efficiency.

The MY20 Mazda2 comes in three variants, with titles updated in line with Mazda’s new-generation nomenclature. Designated G15 Pure, G15 Evolve and G15 GT, it’s available as a sedan or hatchback.

Mazda2 G15 Pure Sedan manual is the entry-level at $20,990, plus on road costs. The G15 Pure Sedan automatic adds $2000 to the price. Respective hatchbacks attract no price increase.

STYLING
Mazda says almost half of Mazda2 buyers do so with design the major consideration, so it’s not surprising designers have gone to work on the MY20 model to keep looks fresh and appealing. 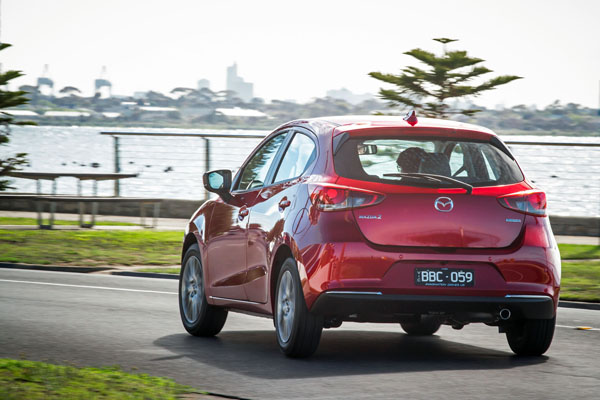 Cues taken from Mazda6 and Next-Gen Mazda3 include a new mesh grille a la Mazda6, an extended signature wing with thickened chrome to create a bold, wide feel.

Headlights have been given a sleek, wide shape that blends into the body, with a large cylindrical lighting element giving the impression of penetrating eyes. Fog lamps are now integrated with the headlamps. Taillights follow suit, taking on a cylindrical brake lamp element.

Outer edge garnishes of the bumper add a premium finish to the rear. The 15-inch alloy wheels have taken on a new silver, capping off what is considered a more mature, modern exterior.

INTERIOR
Inside, the passenger cabin has been imbued with a premium character through space that belies the car’s compact dimensions. Shade has been used to define a more mature character.

Each variant has different decor, the G15 Pure using brown cloth to great effect, once again creating a grown-up feeling of comfort and space.

INFOTAINMENT
The Mazda Connect system in new Mazda2 is good to go with Apple CarPlay and Android Auto. Through a simple USB connection customers can easily use applications on their smartphone via MZD Connect’s Human Machine Interface via a knob on the centre console and 7-inch full colour touch screen display.

ENGINES / TRANSMISSIONS
The new Mazda2 is equipped with the highly efficient Skyactiv-G 1.5-litre petrol engine, with power up from 79 kW to 82 kW. Torque is also improved, being increased from 139 Nm to 144 Nm.

A number of changes were made to achieve this, including revision of piston configuration, addition of a coolant control system and increased fuel pressure injection. Fuel consumption on test was recorded at around 6.5 litres per 100 kilometres in city and suburbs, and 4.8 litres on a motorway run. 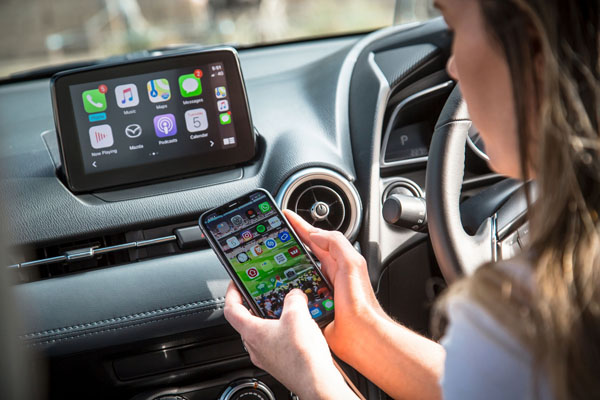 SAFETY
Airbags include front (driver and passenger), side (front) and curtain (front and rear).

DRIVING
Engine efficiency came in for attention in the new Mazda2. The Skyactiv-G 1.5-litre petrol engine has been upgraded to quicken response, reduce harmful stuff in exhaust emissions and increase power and torque.

While pulling power goes from 139 Nm to 144 Nm, getting the best out of the powertrain is reserved for high revs where the cabin interior, sadly, is subject to harsh engine noise. The manual gearshift is not the easiest to manipulate.

Other than that, occupants are generally treated to pleasant surroundings. Seats were redesigned to keep the pelvis upright to maintain the spine’s natural S-curve, which is considered to be the ideal sitting posture.

This claims to prevent the line of sight from wavering on curves or during lane changes and generally improves ease of driving. Without an extended trip in the car, I’ll let the science speak for itself.

An automatic dimming rear-view mirror prevents glare from headlights of vehicles behind from driver distraction at night.

The suspension has seen upgrades which increase damping force at low speed on even road surfaces for smoother movement, while decreasing damping at higher speeds rough roads.

G-Vectoring Control Plus adds direct yaw control via the brakes when cornering. GVC Plus lightly applies brake force to the outer wheels as the steering wheel is returned to the centre, providing a recovery force to restore the vehicle to a straight line. This is advantageous in emergency avoidance manoeuvres, including lane changes at high speed and driving on slippery surfaces.

SUMMING UP
With cutting-edge design and the latest automotive technology, the Mazda2 G15 Pure Hatch has grown up to challenge the leaders in the compact car segment. Without a comparo, at a $2000 premium, the automatic might be a better bet than the manual.