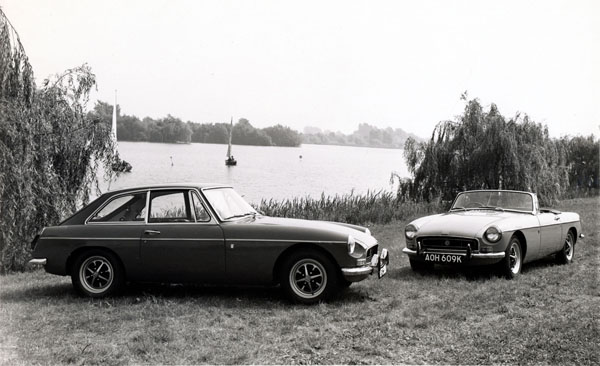 With sales of the Chinese-sourced MG models booming it’s a good opportunity to look
back at the iconic British sportcars that established the marque, and in particular the most
popular of all, the MGB.

The MGB was significant mainly because it was the archetypal cheap sportscar, rapid
without being really fast in standard form, simple to maintain, and endowed with enduring
good looks. At first only a two-seater open sports version was available, but in 1965 the
very elegant MGB GT hatchback derivative was released. It was unfortunate that the
design was improved very little over its model life, for in the last few years it lagged behind
its competitors.

Prior to that, popular sportscars almost without exception had beam rear axles, and the
first newcomers followed the tradition of the 1950s. Thus, MG’s new MGB arrived in 1961
with a beam axle on semi-elliptic leaf springs, and soon began to look outdated. This did
not hinder the cars popularity for in spite of this the `B’ went on to become MG’s best-
selling model ever, remaining in production for 17 years. All up 512,880 units were
eventually built. The MGB featured a unit-construction body/chassis design but with the
same front suspension and basic engine/drive as used on the MGA. The four-cylinder
engine was enlarged to 1798cc which gave the car a top speed of 170km/h.

BMC replaced the big Austin-Healeys with a six-cylinder derivative of the MGB called the
MGC in 1967, which offered the power boost the MG needed. The six-cylinder overhead
valve engine developed 108kW and was developed from that used in the Austin 3.0-litre
saloon. The car used a torsion bar front suspension from this same car but this always had
too much understeer. Since neither performance nor handling was up to scratch the car
was not a success and was dropped after only 8,999 units were produced.

The MGB GT V8, which sold during the period 1973 to 1976, was a much better car
although it was too expensive to become as popular as the MGB and only 2,591 versions
of this model were produced. It was a very fast car but was produced five years too late.
When Mazda introduced the MX-5 in 1988 the company openly acknowledged their debt
to the MGB and the Lotus Elan of the 1960s.

The four-cylinder MGB was a very successful long-distance racing sportscar, and
appeared three times at Le Mans, winning its class in 1963 at 148km/h, and improving on
that to 158km/h in 1965.