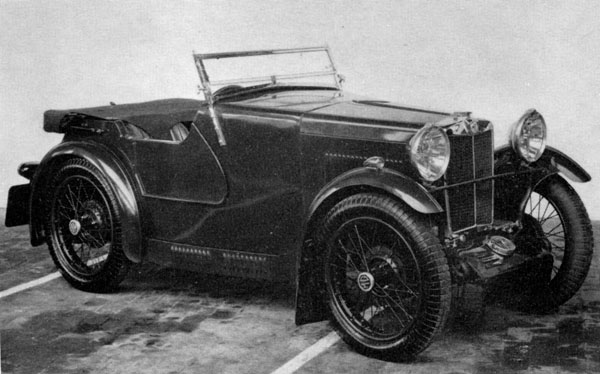 From 1923 Morris Garages of Oxford had been building slightly more sporting versions of each of their standard Morris cars. These might have been considered as sporting but certainly were not small and could not be considered elegant either. After the launch of the Austin Seven, which was an immediate success and carved out for a completely new market for Austin, Morris countered by launching its Eight.

Since it had already become a tradition that MG built a sports version of each Morris model a prototype was built in which a small two-seater body was mounted on a slightly modified Morris Eight chassis. This became the M-type Midget and was the forerunner of a range of successful MG sports cars. Where these cars differed from previous sports cars – many manufacturers also produced sporting versions of their standard sedans all of which, being purpose-built quality vehicles were expensive – was in the fact that they were adapted from and used most of the components of a mass-produced small saloon.

This placed them in a lower price category and consequently accessible to many motorists who otherwise could only dream of owning a sports car. And so the Midget became to the sports car class what the Austin Seven had become to motoring in general. The ladder type chassis used in the Morris Eight proved to be very suitable for a sports car. It gave the front end more stiffness that resulted in excellent handling. In later versions it was also very suitable for the fitting of lever-arm hydraulic dampers which MG continued to use for a number of years.

The typically stiff ride and control problems on bumpy roads was due to the continuing use of semi-elliptic leaf springs. The Midget was an early adaptor of front-wheel brakes, using 20 cm drums on all four wheels cable actuated. Although the cables were prone to stretching these proved better than the rod linkages used on most cars.

The Midget’s 847 cc engine was quite advanced for the time, especially in its use of an overhead camshaft. This was driven by a bevel-gear shaft at the front of the engine which also formed the armature spindle of the dynamo but only two bearings were fitted to the crankshaft. Naturally an SU carburettor was fitted. Since the engine only developed 15 kW, drive to the rear axle was via a single plate clutch and three-speed gearbox. This gave the small car – its wheelbase was only 1.98 metres and width so small that two occupants were a real squeeze – a standard of sports car performance which was considered acceptable for the time.