HOLDEN SPARK HOLDS ITS OWN – PLUS A LOT MORE 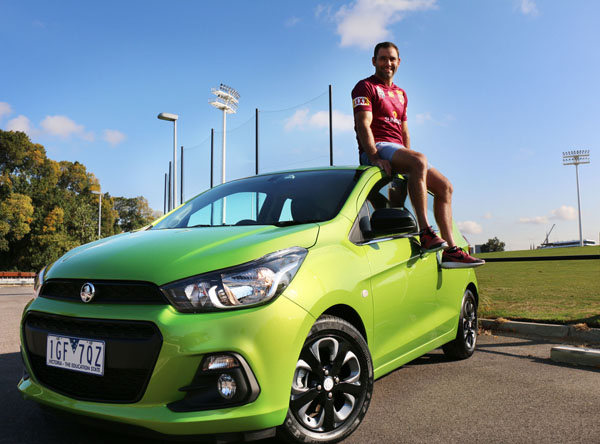 Queensland and Australian rugby league captain, Cameron Smith, is sitting on top of Holden’s new Spark to show its strength.

Australia is one of the toughest countries of all in which to sell cars. A huge number of marques with a mind-numbing selection of models are being endlessly promoted by marketing gals and guys. All of whom are desperate to gain more than their fair share of the automotive sales action.

Their efforts tax the strength of my inbox and letter box every day.

We motoring journos have to consign much of the marketing hyperbole to our trash bins – electronic as well as the square type under the desk – as the PR releases have a lot of predictable sameness to them.

So it was great fun to receive something right out of the ordinary from Holden this morning. The press release announced that the new Holden Spark has been given a five-star safety rating. Which is good news, but to be perfectly honest nothing out of the ordinary as almost all cars get five stars nowadays.

Where it did become fun was when Holden said, “Spark’s high-strength steel safety cage is capable of supporting a roof-load force 3.92 times that of its own weight … if you’re an excellent jenga-playing fan of State of Origin – that’s the weight of the Queensland and New South Wales squads combined!

It finished, tongue in cheek, with, “Disclaimer – Holden does not recommend customers attempt to balance any State of Origin squads on top of a Holden Spark, or any other car.”

On a more serious note, “Holden’s Director of Vehicle Performance, Ian Butler, said that safety was the first priority in developing the all-new Spark during engineering work carried out by Holden with GM internationally.” A fair bit of this work was done at Holden’s Lang Lang test facility in Victoria.

The message here is that the Australian automotive industry is alive and well. While, sadly, all car manufacturing will stop in Australia in 2017, this country’s engineers, designers, test drivers and many other are held in very high regard globally. While Holden Spark is ready to go now, there are dozens of other projects at various stages of development being worked on as you read this. Many are on vehicles that will be sold here one day, others will be sold overseas but not reach our shores.