MAZDA3 IS SMARTER THAN EVER

Mazda has never been a company to follow other auto makers and the updated Mazda3 is a prime example of this. While it has received a mild facelift, the main emphasis is on what you can’t see, with major changes to the steering and suspension systems.

Safety, long a strong point with the Mazda Australia organisation, has been further enhanced.

It has become customary for Mazda Australia to fly senior engineers from its Japanese head office for car launches downunder. A real honour to our local guys and gals that shows the high esteem in which they are held. In this instance, Hitoshi Takeshita, the general manager of the product division attended the new Mazda3 event in Queensland.

Takeshita-san explained that the changes to the styling, chiefly a revised grille, and slimmer lights front and back give the facelifted Mazda3 a wider look.

Inside, there are changes to the decorative areas of the trim. Perhaps most importantly, the side ‘wings’ on the instrument display panel are a bit larger, and therefore faster to read.

Takeshita then went on to explain the new Mazda ‘G-Vectoring Control’ system that uses electronic control to improve chassis balance. This senses movements of the steering wheel by the driver and modifies the amount of torque to each of the front wheels to change the amount of grip that’s required. Torque is restored when the system sees the car is in balance again, thus bringing the back wheels into play.

Complicated? Yes, and there’s a lot more to it than this necessarily brief explanation gives. Try Google for deeper explanations, ‘extremetech.com’ is a good one.

Anyway, enough of the theory. We were able to spend a number of hours at the Driver Training Centre at Mount Cotton, near Brisbane doing comparison tests between the just superseded Mazda3 and the revised one. This consisted of driving the two cars over the same course, first on the wet skidpan, then on sections of the road course. 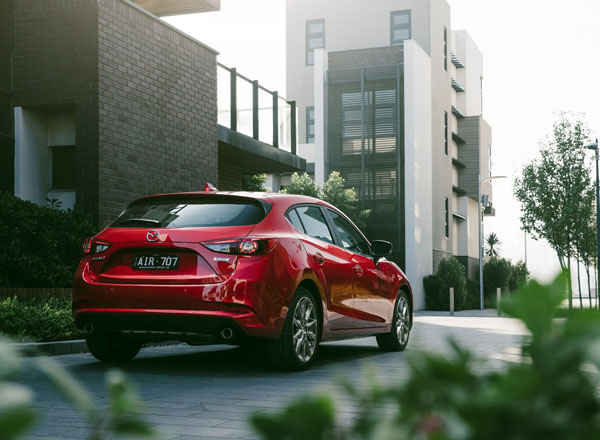 Note that the Mt Cotton facility is not a racetrack, rather it has been designed to simulate real Australian country roads. There are no runoff areas and quite a few places where you can hurt the car, and yourself, if you make a mistake.

The testing was done by setting the cars on constant speeds using the cruise control. No accelerating or braking was required so the ‘both-feet-on-the-floor’ technique was used.

The old Mazda3 felt fine, turning in with a fair bit of precision and not needing a lot of wheel movements to make it handle neatly. The fast changes of direction around witches hats were handled with little fuss. (It has to be admitted there was a temptation to ‘drive’ the car on the throttle and brakes that was almost overwhelming at times as the cars were going pretty hard. Anyhow we managed to resist that and let the Mazda do the work.)

Then it was into the new model. The difference wasn’t huge, but was most certainly noticeable. Less movement of the steering wheel was required to turn-in and there was no need to make any corrections at the speed at which we were traveling. We are talking about real speeds here, enough to squeal the tyres at times.

What does this mean in real life driving? It means that drivers with little training (which is the great majority of them thanks to the very basic requirements set by Australian governments) are less likely to panic and overreact if something happens to them unexpectedly on the road. 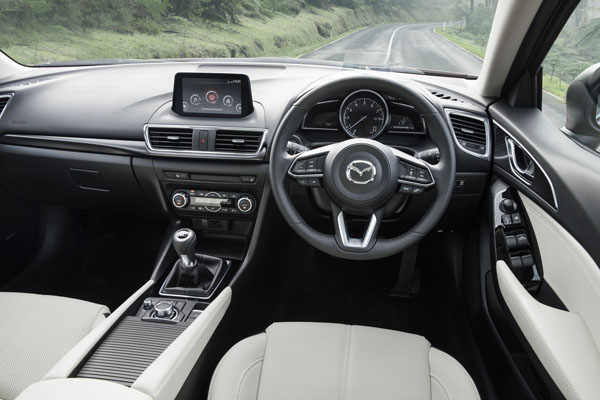 Just in case you still get it wrong the latest Mazda3 has even more safety technology than before. There’s Smart City Brake Support-Forward (SCBS) across the range. Mazda3 Maxx and all grades above it get SCBS in reverse gear as well (SCBS-R), Blind Spot Monitoring (BSM) and Rear Cross Traffic Alert (RCTA).

The 2.2-litre turbo-diesel has been discontinued in Australia due to lack of interest.

Six-speed manual or automatic transmissions are offered on all Mazda3 models.

Mazda3’s designers and engineers have taken an already good car and made it better in numerous ways. Mazda3 is already one of the big sellers in Australia and looks like increasing these numbers.