Mazda CX-30 is an SUV that sits neatly between Mazda CX-3 and CX-5 in size and price. In times when fewer and fewer so-called SUVs are only driven by two wheels the CX-30 is offered with a choice between two and all-wheel drive.

Interestingly its chief designer, Ryo Yanagisawa, who travelled to Australia for the media launch of the vehicle calls it, “a crossover SUV”.

May we predict that the Soul Red Crystal Metallic will be the number-one choice?

High spec interiors are offered in the Touring and Astina models; a Rich Brown colour scheme, paired with either Black leather or Pure White leather trim. Pure and Evolve have a Navy Blue and Black cloth combination. 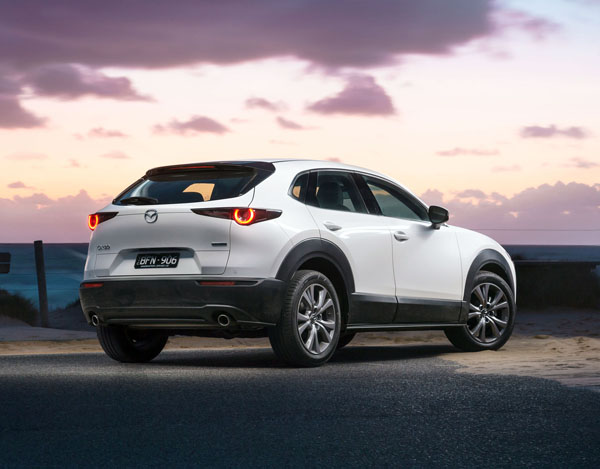 ENGINE / TRANSMISSIONS
Power is provided by the latest iteration of two familiar engines – Mazda Skyactiv-G 2.0-litre petrol, with 114 kW and 200 Nm, or 2.5-litre petrol (139 kW/252 Nm. The smaller engine drives the front wheels, the larger the front or all four wheels.

Transmission is by a six-speed automatic. No manuals were considered as Australian imports as only about one in a hundred drivers in this class like to do their own shifting.

Mazda’s impressive Skyactiv X engine won’t be in CX-30 second half of year in Australia.

Other than that the system is very easy to use – a strong point in all Mazdas as the company spent a considerable amount of time researching this matter.

SAFETY
There’s a big emphasis on keeping drivers out of trouble if they’re paying more attention to their phones than to their driving.

The CX-30 has Front Cross Traffic Alert and a Driver Monitoring system, which monitors the driver’s face before sending an alert. 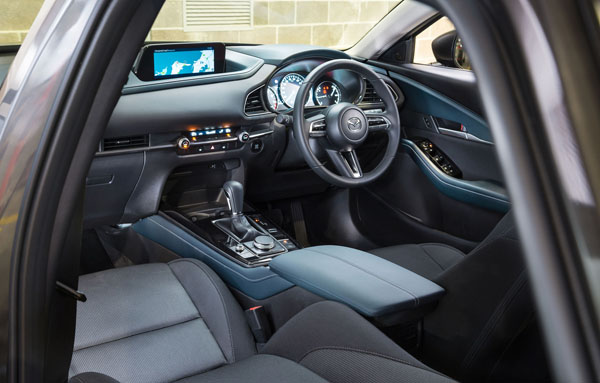 DRIVING
There’s good space for four adults in legroom and head space. The smallish centre-rear seat is hampered for footroom by the central strengthening tunnel.

The boot is a reasonable size but the semi-coupe roofline means it may not be able to carry items such as large boxes that can fit into more conventional SUVs.

We’ve just spent two days and close to 500 km driving the new Mazda CX-30 in Melbourne traffic, on country roads on a roundabout trip to Cape Schenk and on motorways and, frankly, came away even more impressed than we had originally anticipated.

Ride quality and interior sound levels feel as though they rival that of the Mazda6 sedan. That’s not in back-to-back testing, although we may try to do a proper comparison later.

About 98 per cent of the driving was done on sealed roads. Some were coarse-chip surfaces, which did increase noise levels, but not nearly to the same extent as in most other vehicles.

The short stretch of unsealed roads showed some deterioration in ride comfort but it was still pretty good and felt solid.

We tested both the 2.0- and 2.4-litre engines. The former has just enough power and required some down changing of automatic transmission on uphill areas.

Try for yourself if you’re a keen driver and/or will be carrying several passengers to see if it’s got enough grunt for your taste.

The 2.4 is much nicer to drive, with the added torque making itself felt. Though we didn’t do any proper back to back driving of the two engines we feel the 2.4-litre may not use any more petrol than the 2.0- as it’s running more easily.

Note that the AWD version weighs about 90 kg more than the front driver.

SUMMING UP
Mazda CX-3 is an extremely pleasant car to ride in and to drive. It’s built to Mazda’s usual high quality, looks good and, though not the cheapest in its class offers good value for money.