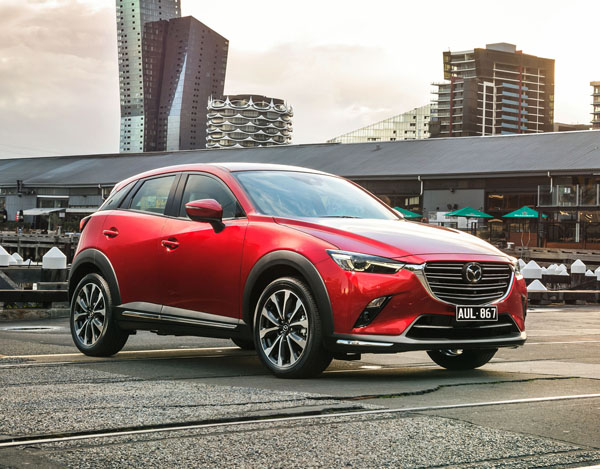 Mazda continues its fast paced assault on the Australian car market, this time with its smallest SUV, the CX-3 receiving a facelift, major interior changes, added comfort and improved engines.

The frontal styling of all current Mazdas is arguably the biggest reason for its success and the shape has been refined with a bolder grille built around strong horizontal lines. There are also changes to the shaping of the front foglight surrounds as well as to the rear lights.

It’s not just the shape that’s selling Mazdas, the Soul Red paint is a real standout and is accounting for something like 20 to 30 per cent of sales depending on model. My well-known dislike for the 500 shades of grey that haunt our roads is gradually being offset by an increasing number of bright red Mazdas. Yippee.

Inside, Mazda CX-3 has a revised centre console centred around an electric parking brake, which is now standard on all variants.

The Mazda Command Controller for the infotainment system has been moved forward to make its operation easier to work. A folding padded lid is used on the console box, doubling as a comfortable central armrest for the front passenger. 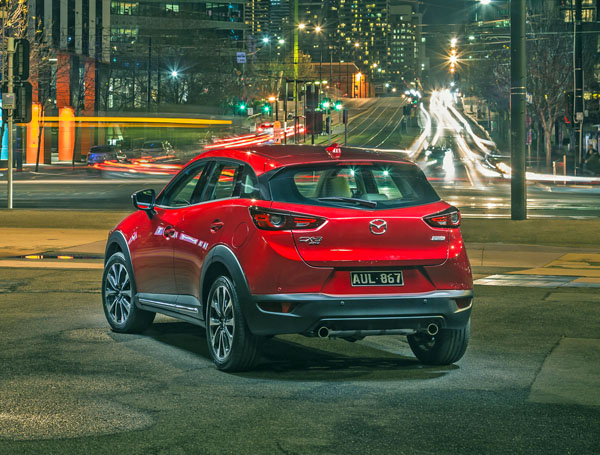 Talking of infotainment Mazda continues to drag the chain as Apple CarPlay and Android Auto are still not fitted to any of their range. The company is somewhat embarrassed about this but hopes to rectify the situation within months. Existing vehicles from 2014 onwards will be able to have the systems retrofitted.

Urethane foam with a high-damping quality give greater ride comfort. Seat upholstery has been changed to full leather on the high grade models.

A reversing camera is now fitted to all grades. The topline Mazda CX-3 Akari has a 360-degree View Monitor and Radar Cruise Control.

New Mazda CX-3 is available in four model grades, two of which have been given modified names: Neo and Maxx are now called Neo Sport and Maxx Sport. The sTouring and the Akari models retain their previous nomenclature.

Dynamics have been improved by slight, but important revisions of the Electric Power Steering (EPS) setup. 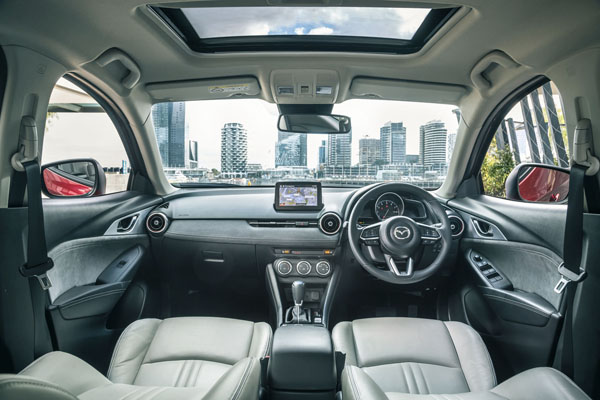 The Mazda CX-3 SKYACTIV-G 2.0-litre petrol engine revisions improve economy and give it quicker throttle response. Power and torque are both up marginally, from 110kW to 111kW and torque from 192Nm to 195Nm at 2800rpm.

Biggest underbonnet news is the fitment of a SKYACTIV-D 1.8-litre turbo-diesel engine in place of the 1.5-litre unit. This new unit lifts power to from 77kW to 85kW from 77kW. Torque is unchanged at 270Nm between 1600 and 2600 rpm, but there’s a strong emphasis on drivability and lower fuel and emissions.

New Mazda CX-3 is available in both front-wheel-drive and all-wheel-drive with either the six-speed manual or six-speed automatic transmission.

DRIVING
Mazda laid out an interesting drive route for the launch of its revised CX-3. It began at Tullamarine airport in Melbourne, took us out about through beautiful areas of the Yarra Valley and back to Tulla. With a total of close to 300 km it followed your typical Sunday drive with the family.

That’s the good news, the bad news was that CX-3s with the new turbo-diesel engine were still on board the ship bringing them to Australia. Anyhow, we had plenty of time to enjoy the improved petrol units in both manual and automatic guise.

This is a sweet midsize engine that’s nicely responsive and pulls well on hills and provides sufficient power for safe overtaking in a reasonable short distance.

The gearshifts on the manual are smooth and easy but we found the auto was reluctant to shift down at times unless given a pretty hard prod on the accelerator.

Handling is neat and predictable at all times and you have to be going pretty hard before the driver assistance systems step in to keep you out of trouble.

Ride comfort is generally good, but as can be the way on small cars the suspension was caught out at times on rough Aussie backroads.

Seating is fine in the front, with the sort of comfort you would expect from a car a size larger than this small SUV. However, the back seats are cramped for space unless the fronts are moved forward a few notches to add legroom. Check this out on your pre-purchase test drive of the car.

Also, the boot is rather small because the CX-3 is based on the Mazda2 small car, not the Mazda3 as you might expect from the SUV’s name.

SUMMING UP
Mazda is on a winner – no, onto a series of winners – in Australia at the moment and anyone looking to buy a small SUV should certainly have the CX-3 on their shopping list.