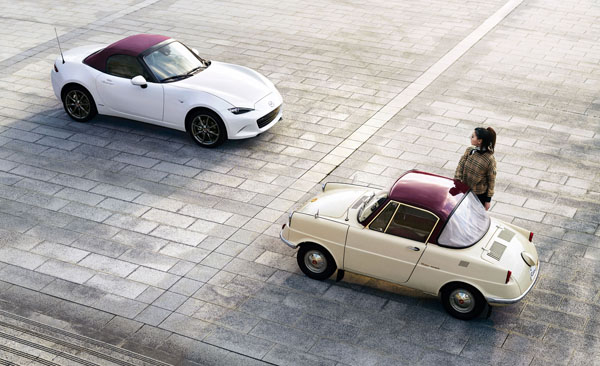 Celebrating 100 years since its foundation as a cork manufacturer in January 1920, Mazda Corporation will release a 100th Anniversary Special Edition series of its major models.

The special edition models pay homage to the company’s first passenger car, the R360 Coupe. Mazda says it was designed to make car ownership accessible to many. It was powered by a four-cylinder engine driving through an automatic transmission.

An R360 Coupe was best-demonstrated in Australia on a 1,500km Perth to Esperance and back endurance drive in 1961. As a nod to the company’s roots, the 100th Anniversary Special Edition series borrows the distinctive burgundy and white of the high grade R360’s two-tone design.

All special edition models are finished in Snowflake White Pearl Mica, with a rich burgundy interior. The same Burgundy leather introduced on Mazda3 adorns the seats, and the colour scheme is repeated on the floor mats and floor carpet.

Models are also distinguished by 100th Anniversary Special Edition badging, which combines the current Mazda brand mark with the round logo created when Toyo Kogyo was first formed. The logo features on the front guards, key fob, wheel caps, headrests and floor mats.

Potential customers can register their interest. Numbers, pricing and on sale dates will be released later.