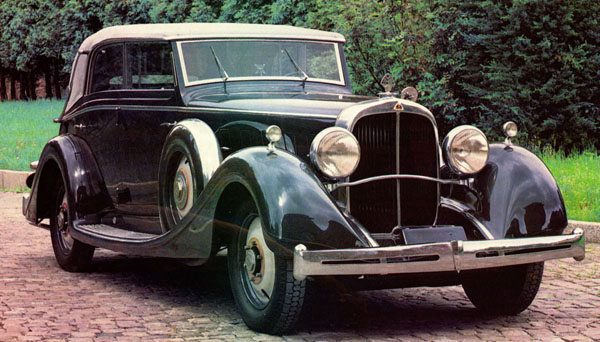 The name Maybach is as old as the motor industry. From its commencement in 1921 this car manufacturing company only continued in business for 20 years. The car was named after Wilhelm Maybach who was Gottlieb Daimler’s first designer. Maybach was a clever engineer who was also responsible for the cars that took on the Mercedes name in 1901.

After completing his engineering studies Maybach eventually set up an aero-engine business with the airship designer, Count Zeppelin, in 1907. It was a family business with Maybach’s son Karl looking after the design side. After World War I, Karl converted the factory into one capable of producing automotive engines. The factory’s first design was a 5.7-litre straight six, but this proved difficult to sell. After a lot of effort they finally did find a customer. Not wishing to face defeat, however, the decision was made to start building cars for their Maybach engines.

Possibly due to a lack of finance this was never a high-volume operation. At best they turned out on average less than 200 cars a year. Maybach’s first V12 was a 7.0-litre unit which was introduced in 1929. Named the DS7, it produced 112 kW. That Maybach 12 was replaced a year later by the Zeppelin, with the engine enlarged from 6962cc to its definitive 7922 cc. In this form it produced 150 kW. One of the engine’s real virtues was its flexibility, so much so that a gearbox was hardly necessary. Yet ironically one of the outstanding features of Maybach cars was their sophisticated transmission systems. The Zeppelin had an all-synchromesh four-speed gearbox, its virtue being that gears could be pre-selected and changes made by simply lifting the foot off the throttle and operating a small lever. The addition of a low ratio option, in effect, gave four additional ratios.

The chassis was of pressed-steel construction and as with most cars of this time front and rear axles were rigid. Like other cars in this class there was central chassis lubrication and built-in hydraulic jacks. An interesting addition was the fitting of an `equalising device’ designed to increase brake forces if the car was driven at its top speed of around 177-185km/h. Since Maybach specialised in engine manufacture, bodies were always fitted by outside coach-builders. The German Spohn company built bodies for most of the 300 Zeppelins that were produced. That was a significant total, matched by few other luxury car makers of the period.

Maybach did not resume car production after World War II. Karl Maybach died in 1954 and six years later the company was absorbed into Daimler-Benz.