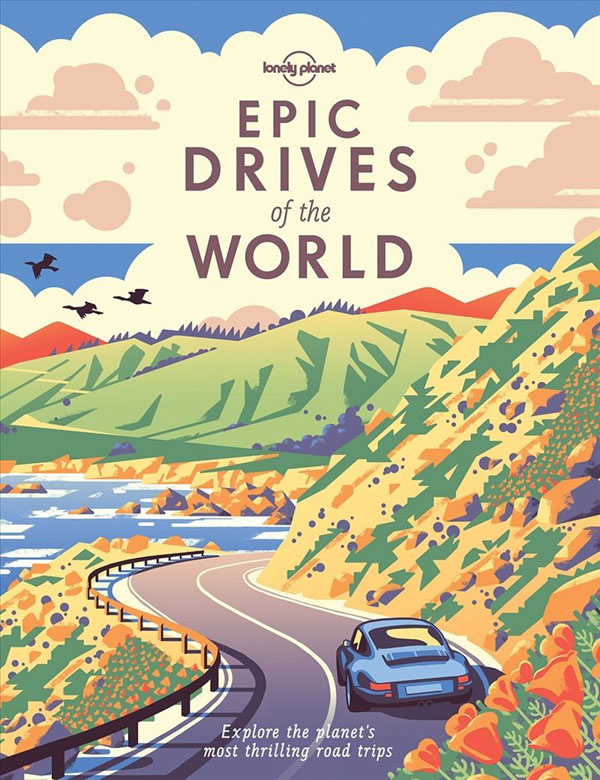 Lonely Planet’s new hardcover book, Epic Drives Of The World, is beautifully illustrated hardcover book follows on from the well received Epic Bike Rides of the World published in 2016.

It features 50 classic driving routes across the world (from Argentina to Zambia), and 200 ideas for great drives. These range from easy-going cruises to some fairly serious back-country adventures.

Australia is represented by six driving routes, “The Great Ocean Road”, “A Short Hop from Hobart to Queenstown”, “Across The Kimberley: The Gibb River Road”, “Following the Captain Cook Highway”, “The Great Alpine Road”, and “The Track: Alice Springs to Darwin”.

Over the years I’ve covered each of these Aussie routes, sometimes privately, on other occasions on a car launch drive program. It will come as no surprise to learn that The Great Ocean Road has long been popular for Australian car companies to display their latest products.

I’ve even managed some of the Drives in other countries as part of my wonderful life as a motoring journalist.

There’s plenty of variety in the backgrounds of the authors of the many articles in Epic Drives Of The World. Most pieces are from car drivers, but others routes were written by motorcyclists, one of them our own long time contributor Peter ‘The Bear’ Thoeming.

There’s even a 251 km tour from San Francisco to the Napa Valley in Northern California using a Nissan Leaf electric car. An interesting one as people tend to steer clear of this sort of car for longer trips due to so-called range anxiety.

Some of them can be done in an easy day’s driving, others can take a weekend, even a week or more. After all this is about driving enjoyment, not setting new speed records.

Drives are colour-coded according to difficulty, which takes into account not just how long, remote and challenging they are but the logistics and local conditions. The index collects different types of drive for a variety of interests.

There is certainly no requirement that you stick to the trips outlined in detail here. To quote Lonely Planet, “The road tripper is always independent. Want to take a detour (and we suggest some gems) or stay an extra day? Go right ahead. It’s all about the journey.

“Driving a car need not be a mode of transport that insulates you from your surroundings: if you stop regularly, explore, encounter local people and their culture, you’ll have as rich and rewarding an experience as you could hope for.”

The main stories in each regional chapter feature first-hand accounts of drives in that continent. Each includes a fact-box to start the planning of a trip: when is the best time of year, how to get there and suggestions as to where to stay and where you might like to eat.

As well as the 50 trips that receive major status, ‘More Like This’ sections are given after many stories. These suggest ideas along a similar theme. Though not necessarily on the same continent.

This is no lightweight book in either sense of that word. Not only does it go into plenty of useful detail – it’s also on the hefty side. Backpackers wanting to travel light may find it a hassle. Then again the word ‘Drives’ appears in the title so carting it in the car isn’t going to cause a hassle. We certainly plan to ours ours on the next trip.

One gentle comment: about 99 per cent of the countries in the world use the metric system of measurement, yet distances in this global guide are given in American miles, with metric number in brackets after them.