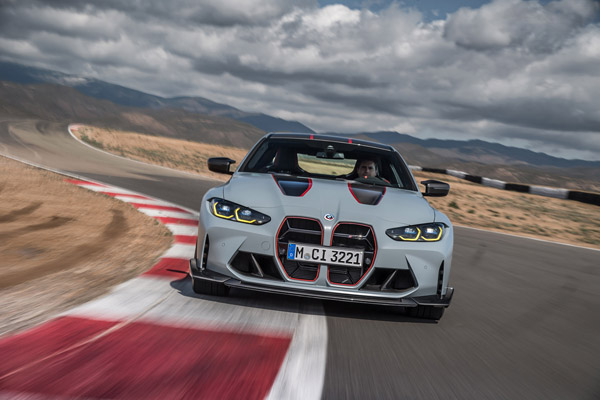 Light weight BMW M4 CSL is coming to Australia later this year. It has a kerb weight to
1,625 kilograms, giving it a power-to-weight ratio of just 2.95 kilograms per hp
(4.01 kg/kW).

Interestingly it will only be a two-seater as 21 kilograms were saved by removing the rear
seats and seat belts, integrating a partition and making the associated modifications to the
luggage compartment.

Chassis changes, including the addition of extra-lightweight M Carbon ceramic brakes and
special light-alloy wheels, springs and struts, lowered the figure by around another 21
kilograms.

Paring back the amount of soundproofing plus switching to ultra-lightweight sound
insulation saved around 15 kilograms, while the use of components made from carbon-
fibre-reinforced plastic (CFRP) deducted some eleven kilograms. For example, in addition
to its CFRP roof, the bonnet and boot lid of the BMW M4 CSL are also hewn from this
lightweight high-tech material, as is its centre console.

A titanium rear silencer cuts more than four kilograms from the weight of the exhaust
system. 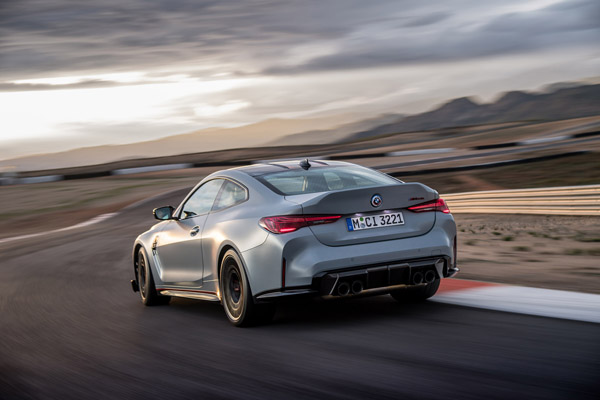 Detail modifications to areas such as the BMW kidney grille, rear lights, floor mats and
automatic climate control shave off another four kilograms.

The body of the BMW M4 CSL is painted in the exclusive Frozen Brooklyn Grey metallic
as standard. This exterior shade teams up with exposed carbon-fibre surfaces and red
accents.

The carbon-fibre structure of the body components is visible in various areas, including the
two chiselled indents in the bonnet. The surfaces of the indents, which are not painted in
body colour, are highlighted by red outlines.

Red accent lines add extra emphasis to the two fins on the CFRP roof, the contours of its
side sills, the black model badges, and the model-specific CFRP splitters and air curtain
inserts in the front apron.

Priced at $303,900 plus road costs the Australian introduction is set for Q4, 2022. The
price includes GST and Luxury Car Tax but not on-road costs.