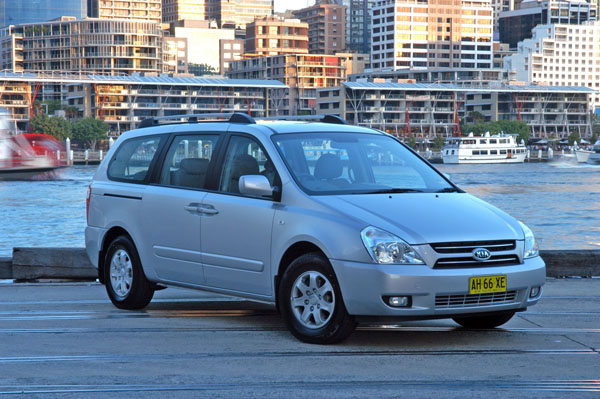 Kia Grand Carnival first arrived in Australia in January 2006. The ‘Grand’ title is well deserved. It’s not only significantly larger than the older Carnivals (that stayed on sale alongside the Grand for a while), but also more sophisticated internally and in the way it rides and handles.

The original Grand Carnival stayed on the market for nine years, perhaps a little too long as many competitors were becoming increasingly more modern than the 2006 Carnival. That all changed in January 2015 as the new model, so good is it that it can almost be regarded an eight seat sedan, not a mere people mover.

The 2015 Grand Carnival was a success right from day one and quite a few are now on the used car market. As mentioned in our What To Look For segment, some Grand Carnivals have been used as taxis and shuttle buses, even courier vehicles, so lookout for ones with big readings on their trip meters. 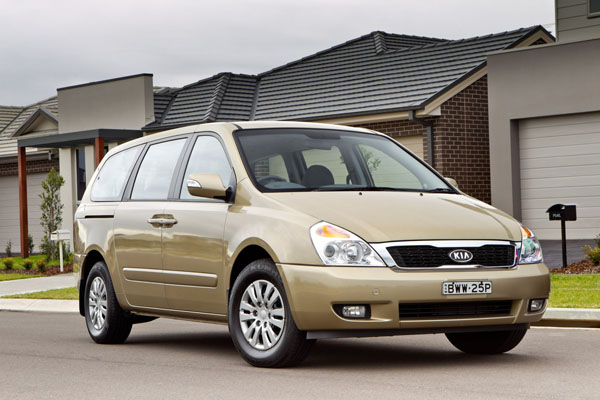 Midway through 2018 the Grand Carnival received an excellent facelift and some added equipment. We won’t examine these here as they are only a few month old.

Grand Carnival has seating for eight adults, two in front bucket seats; three in the second row, each in individual seats, and a further three in a bench seat at the rear. All seats have good legroom and are of decent width.

Access to the rearmost seats is better than average thanks to clever design in the way the other seats move out of the way. It’s probably best if the kids travel in the back and leave the middle seats to grandparents. Not that kids have ever complained about being as far away from their parents as possible.

Luggage space with all seats in use is still surprisingly good. The rearmost seats fold flat into the floor and significantly improve cargo room.

Interior comfort of the 2006 Grand is generally okay, but can deteriorate if the road surface is in poor condition. On smooth roads they are fine. It’s no surprise that the all-new 2015 Grand is noticeably better than the one it superseded. 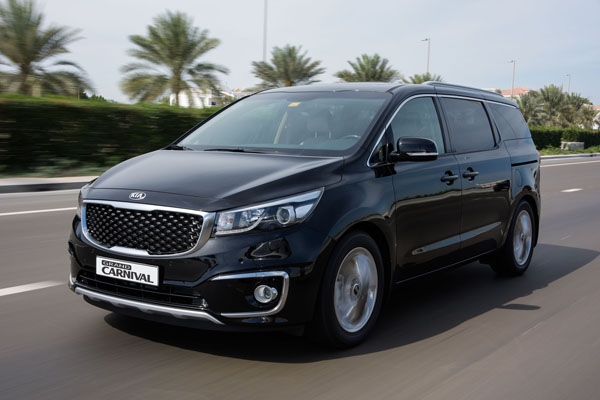 Handling is safe and sensible, but keen drivers are unlikely to get any pleasure from driving one. Having said that the 2015 Grand is certainly better than its predecessor.

Most Kia Grand Carnivals have the advantage of being powered by a V6 petrol that’s smooth and refined. The 2006 model had a capacity of 3.8 litres and sat beside a five-speed automatic. The all-new Grand Carnival of 2015 has a thoroughly modern 3.3-litre V6 petrol with a six-speed auto.

This six-cylinder drivetrain is certainly when almost all computers have a four-cylinder unit is a strong point in the big Kia’s sales success.

A four-cylinder 2.9-litre turbo-diesel was added to the range in July 2009. A relatively old design it’s not as sophisticated as the V6 petrol but it uses less fuel and is reasonably response. It was replaced by a significantly better 2.2-litre unit, still with four cylinders, in May 2011.

Kia dealers in tend to be concentrated in the major population centres, both in capital cities and country cities.The company’s big increase in sales in recent years has seen a significant expansion in the number of dealers.

We have heard of no real complaints about parts availability and spare parts prices are generally reasonable.

The Grand Carnival isn’t too difficult to work on, with most of its major mechanical components being relatively easy to reach. However, we reckon that only those who know what they are doing should work on the vehicle that’s aimed at carrying children.

As always, leave all safety related items to professionals.

Insurance is generally towards the bottom end of the scale, as befits a vehicle that’s not going to be driven hard and fast.

There’s often a larger than average differential between in premium charges so you may find it worthwhile to shop around. Make sure you are doing an exact comparison in what’s covered before making your final decision.

And keep in mind that a long history with one insurer may stand you in good stead if there’s a situation that may be marginal.

WHAT TO LOOK FOR
We have seen some Grand Carnivals being used as taxis and shuttle buses, even as a courier vehicle. Beware big mileage vehicles.

Look over the interior for signs of harsh treatment caused by bored kids. Don’t forget the load area it can also suffer from less than caring loading.

An excess of brake dust on the inside of the wheels can indicate hard driving, something that’s unusual in a vehicle in this class, and probably a good reason for passing up a Carnival and finding another one.

Look at the condition of the front wheels and tyres, damage is often an indication of their being thumped against kerbs by careless drivers.

Make sure the automatic transmission goes into Drive without too much delay and changes gears promptly and cleanly. If it doesn’t, get a professional’s opinion.

Watch for body damage and/or previous repairs. Mismatched paint and rippled panels are reasonably easy to spot. If possible do this inspection in strong light and view the panels along their length to get the best angle on any imperfections.

Check that the powered sliding side door stop and reverses if it meets an object. Use a solid object, not your fingers…

CAR BUYING TIP
Looking at a car that has spent a lot of its life carting kids? Hmm… better check ever square centimetre of the interior.