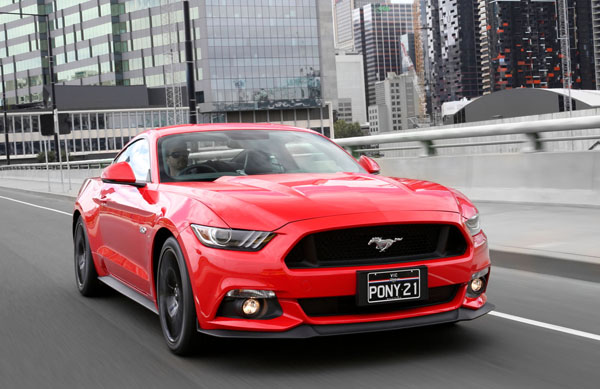 The Ford Mustang is a contrary car: beloved of Baby Boomers yearning for a re-run of a misspent youth; or 14-year-old schoolboys fuelled by raging hormones wishing they could own one.

Wrong. Having spent time with a new ‘Pony 34’, (it’s rego number) most interesting was the appeal of the red GT Fastback shown by young adult females, snapping selfies and sitting behind the wheel, perhaps dreaming of cruising Rodeo Drive.

Maybe I did not get it, but Ford certainly did. Here’s what one Blue Oval bloke thinks: “The visceral look, sound and performance of Mustang resonates with people, even if they’ve never driven one. It is more than just a car – it is the heart and soul of Ford.”

In other words, Mustang’s impact goes well beyond the nine million-plus cars sold in its 50 years of continuous production. For example, it has made hundreds of appearances in film – who could forget the 1968 Fastback’s unforgettable starring role with actor Steve McQueen, carving up the streets of San Francisco in Bullitt – television, music and video games, and is the world’s most-liked vehicle on Facebook.

As the maker says, no Mustang engine line-up would be complete without a great V8 engine at its core. So our test vehicle was a 5.0-litre V8 Fastback with six-speed manual gearbox, notably with Race Red paint, the most popular Mustang colour.

STYLING
The new Mustang looks like a Mustang … if that doesn’t make sense to you it’s a sign you’re not a car enthusiast. It has a muscular, long bonnet, shark nose and signature rear lights. A chromed ‘pony’ in full flight takes pride of place at the centre of the radiator grille.

Seats are laterally supportive but lack of rear legroom has the Mustang deep in 2+2 territory. However, the added width and a new rear suspension make for more shoulder and hip room for rear-seat passengers, and a more usefully shaped boot that can accommodate two golf bags.

Cargo space can be improved by folding the rear seat backs, but the Mustang has not been able to throw off the titchy boot opening, which limits the ability to transport even medium-size luggage.

INFOTAINMENT
One major beef: positioning of the 8.0-inch colour touch screen low on the central dash means the driver has to take their eyes off the road for longer than with high-set screens found in many other vehicles.

The 2017 Mustang has Ford’s SYNC 3 system that features Apple Carplay, Android Auto and Ford Applink 3.0. It offers increased functionality and improved responsiveness, depending on the user’s mobile connection. 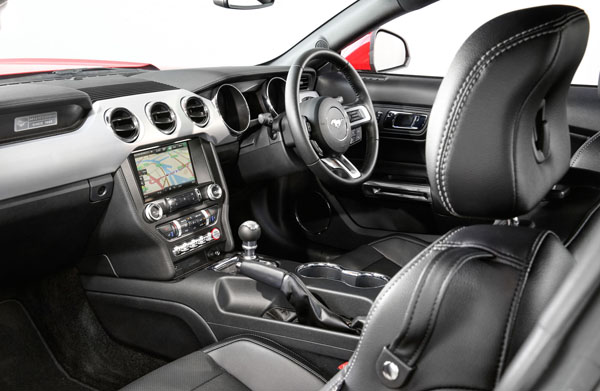 ENGINES / TRANSMISSIONS
Mustang GT continues with the latest edition of the deep-throated 5.0-litre V8, featuring an upgraded valve-train and cylinder heads that help boost output to 306 kW of power and 530 Nm of torque.

SAFETY
Active safety includes Ford-developed stability control system, which is tuned to make the best of Mustang’s dynamic capabilities. In case of the unexpected, debuting in the Mustang is an Emergency Assistance as standard.

A front passenger knee airbag is part of a standard comprehensive safety system that includes a more robust package of sensors and seatbelt anchor pretensioners.

Mustang only gained two stars (out of five) when tested by ANCAP.

DRIVING
The last time Ford sold the Mustang in Australia in 2001 the car had a 4.6-litre twin-cam V8 that produced 240 kW of power and 430 Nm of torque. Lessons learned in developing the special-edition 2012 Mustang Boss 302 have resulted in a boost in power to 306 kW and 530 Nm of torque.

Six-speed manual transmission provides smoother shifting than previous Mustangs. However, the changes are pretty heavy and almost cumbersome at times.

An optional a short-throw shift-kit for the six-speed manual Mustang is there for driving enthusiasts. With a Ford Performance gear knob, the kit reduces throw distance by 19 per cent for swifter gear changes.

The well-sorted Mustang GT suspension ironed out some pretty ropey roads on a drive out of town, while the Brembo brakes were equal to the task of slowing the 1600 kg-plus coupe when required.

At close to five metres long, the Mustang is a big car and needed some close attention in heavy traffic, although manoeuvrability is surprisingly good.

SUMMING UP
Mustang V8 is ‘totally Trump’. Like the strident, self-opinionated leader of the free world, what you see is what you get, and what you get, above all, is an old style muscle car.