The first all-electric production car to go on sale in Australia was the Mitsubishi I-MiEV. In 2010 I picked up one from Mitsubishi in Brisbane and drove to our home on the Gold Coast – arriving there with just five kilometres to spare before the dash readout told me the batteries would be flat. That’s nail biting territory …

Last week I picked up a Hyundai Kona Electric from Brisbane, drove home along the same route – and arrived with 398 kilometres to ‘empty’. Such has been the advancement in electric car technology in nine years. See more details in the Driving section of the review.

Hyundai Kona Electric is a pure electric vehicle, not a hybrid as it has no petrol engine. It’s expensive – very expensive – our test car was the top grade Highlander model, with an RRP of $64,490 plus on-road charges. 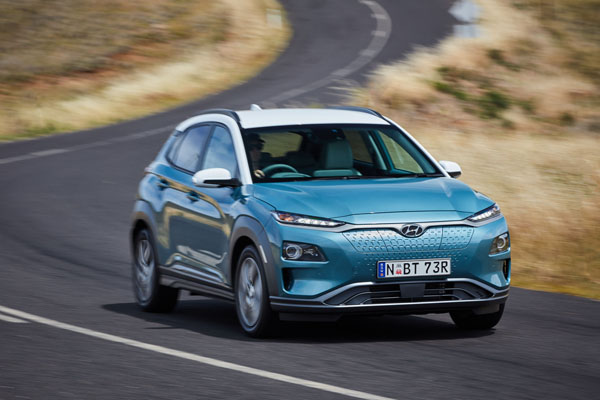 STYLING
Can’t say the front appeals to me, a rounded bit of plastic with many oddly arranged indents. Okay, so the Kona Electric doesn’t need a large grille to suck in huge amounts of air to burn in the engine, nor does it a lot of cooling. Therefore a large radiator isn’t required.

But radiator grilles aren’t on cars merely for engineering reasons. I see them as a sort of figurehead, one that has been crafted and revised by all automotive marques over many generations.

Or am I living in the past and grilles will disappear altogether with internal combustion engines?

Anyhow, the rest of the Kona looks great outside and in, with a modern SUV look that has the wheelarches and sill panels in contrasting colours to give it a business-like appearance.

POWERTRAIN
Kona Electric is powered by a 150 kW electric motor running from a 64 kWh (kilowatt hours) lithium-ion polymer battery under the floor. The motor delivers peak torque of 395 Nm from one rpm (yes, one rpm) and has a real world electric driving range of 449 kilometres when measured on the Worldwide Harmonised Light Vehicle Test Procedure (WLTP). Our test was indicating 489km when we picked it up.

We averaged electricity consumption of 12.3 kWh per 100km. That was a fair bit under the 14.3kWh of the offical testing.

It’s a bit like using a mobile phone, iPad and so on. As soon as you’re near a power source you plug it in. 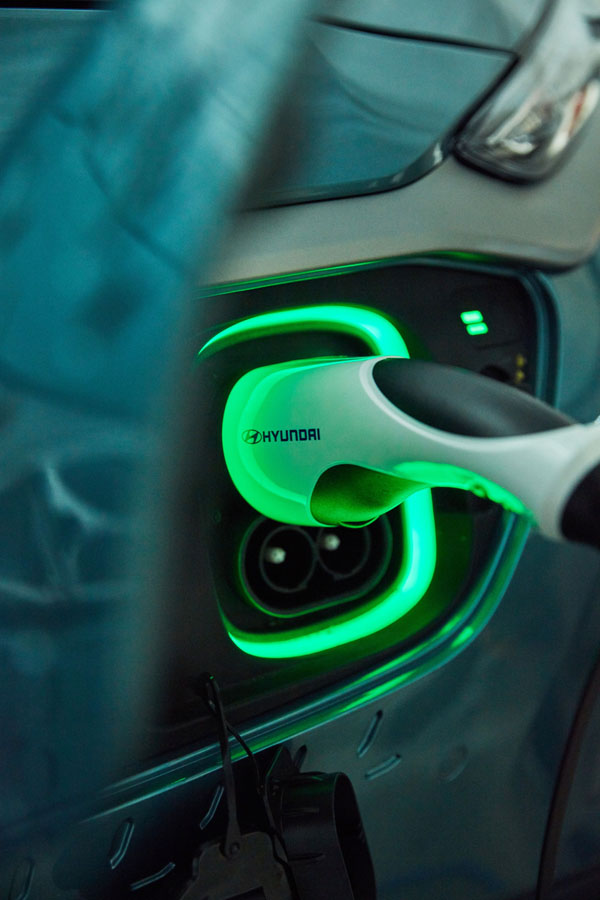 Public charging stations can be used, Kona Electric has a Type 2 plug. If the station only has Type 1 an adaptor can be used, however Hyundai Australia doesn’t recommend this.

Hyundai Kona has Apple CarPlay and Android Auto smartphone interfaces and Bluetooth. It has an eight-speaker Infinity premium audio system with a subwoofer and external amplifier.

DRIVING
Having made that first trip mainly on the 110 km/h motorway back to the office we proceeded to use the Kona to run around our area of the Gold Coast – shopping centres, Council library, giving my wife a lift to and from work at Griffith University, taking the dog to an off-leash park and similar day-to-day activities.

As always when driving any electric vehicle we tended to drive conservatively, being very much aware of the distance to empty reading. However, this gazing at the numbers became less common as it was obvious we could complete the test drive with plenty to spare.

We found the Kona all but silent at lower speeds around town, but with a fair bit of tyre noise once it was over about 50 km/h, obviously it changed from surface to surface. On the motorway it had similar road noise levels to those of petrol or diesel cars of this size.

These noise levels were disappointing as other electrics cars we’ve driven are significantly quieter than the Hyundai. We feel the fuel-economy tyres are likely to be the culprit – knowing Hyundai that’s likely to be rectified quickly.

We’ve enjoyed the challenge of driving other electric cars by using only the ‘throttle’ pedal and found the need to use a paddle as well as the pedal makes the Hyundai less pleasing.

Showing just how serious Hyundai is about its passenger vehicles in this country, the Kona Electric has Australian chassis tune developed across a variety of local urban and country roads.

As torque is there the instant you push the pedal it has excellent overtaking ability and will spend the minimum of time on the wrong side of the road.

Handling is excellent because you have about 300 kg of batteries low down in the ‘chassis’ and the Kona really sticks to the road beautifully. Steering feel could be better if you’re a driving enthusiast, but for day-to-day driving most owners will be happy with it.

Though it’s not the way you would expect owners to drive the Kona can accelerate from rest to 100 km/h in 7.6 seconds, thus making this the quickest of all Kona models.

SUMMING UP
Kona Electric is an impressive advancement in technology and certainly points to the way of the future. It has exceptional performance, can travel a long way on only a few dollars worth of electricity and creates no pollution at the tailpipe.

Would I buy one? The answer is no, I’m a cautious Scottish Aussie not a wealthy early adopter. The improvement in the nine years between that first Mitsubishi and the this week’s Hyundai indicates it’s still relatively early days of electric vehicle design.

If I bought a Kona Electric today and traded it on a significantly better electric car – perhaps with a 700km driving range – the trade-in offered on my 2019 Kona could be horribly low, that is unless Hyundai offers special deals. Time will tell.