Honda CR-V VTi L7 is a seven-seat SUV that is one of many models within the
comprehensive range. It’s aimed at those who need to carry plenty of people, often
including children either on everyday running about, though it’s the sort of vehicle that can
be used on holiday trips as well.

Keep in mind that if you do carry seven the luggage capacity is severely limited. Check for
yourself be taking the family along while you are choosing which SUV you’re going to buy
and making sure how they all fit in. At the same time have the little ones have a good view
out to the side.

STYLING
The designers have sensibly kept practicality in mind when penning CR-V but have
managed to give it a pretty styling look. All who commented on it during our test period
liked the shape.

INTERIOR
The front seats are wide and comfortable and are shaped to provide support during fairly
spirited cornering.

The second-row seats have plenty of space to accommodate two adults or teens who are
growing up fast. And the centre seat is wide enough to be reasonably comfortable. 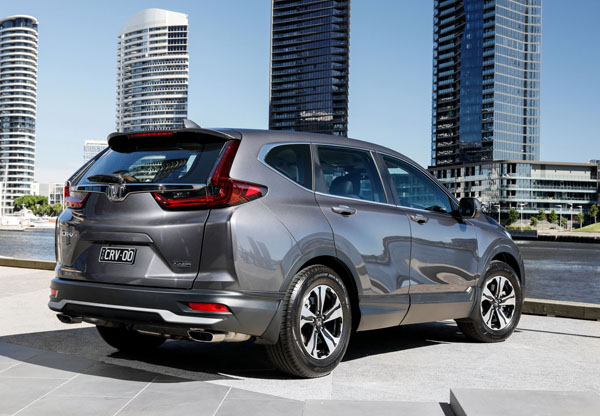 There’s a fold-down centre arm rest with drink holders, directional air vents provide a good
flow. There are pockets behind both front seats, and bottle holders in each door.

The rearmost seats are reasonably spacious but aren’t all that easy to get into. At least for
adults, the kids will love them and will chose to sit way back there as far from the parents
as possible!

Ahead of the driver is a part-digital instrument cluster, with a 7.0-inch touchscreen sitting
out from the dashboard.

There is a phone-shaped shelf in the centre console, large drink holders and a deep
centre stowage as well as big door bins.

INFOTAINMENT
Android Auto and wired Apple CarPlay are standard in the CR-V model, as is satellite
navigation with traffic updates.

ENGINES / TRANSMISSIONS
Power comes from a high-tech1.5-litre turbo-petrol four-cylinder engine. It has 140 kW of
power and 240 Nm of torque that’s there all the way from 2000 to 5000 revs.

The CR-V’s engine sits beside a CVT automatic that keeps the revs at exactly the right
place all the time. 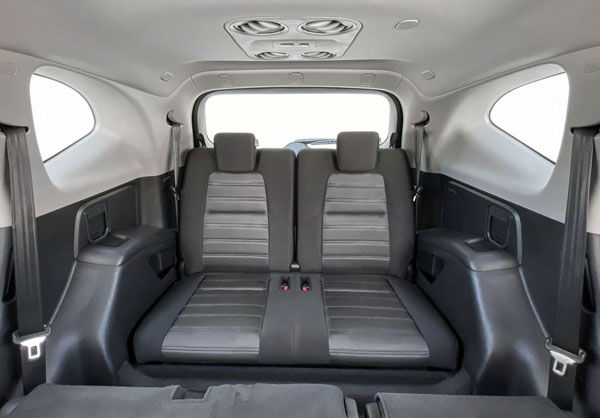 SAFETY
Honda CR-V has a five-star ANCAP rating. There are front, front-side and curtain airbags,
the latter extending to the third row in seven-seat models

It has lane- and road-departure warnings, there’s blind-spot monitoring is fitted to the VTi
X and up models. If you’re driving another model you will have to pay attention to what’s
happening rather than having the car do it for you.

What Honda calls ‘Lane Watch’ is a blind spot camera that gives a picture on the interior
screen when you turn on the blinker. However, it’s only on the passenger side, presumably
because Honda feels the driver has better vision on their side. Can’t say we liked the way
it works, so I used the usual turn of my head to check before changing lanes.

DRIVING
Driving on smooth roads, these Hondas are quiet and unflustered, indeed there was near
silence from the tyres on motorways. Some coarse-chip surfaces added significant noise,
but not to an uncomfortable level.

Comfort is good and the seats supported well, even over long distances.

Steering is light and responsive, it’s safe and forgiving in tight cornering if you push it hard.
Obviously, it’s not intended to be driven that way, but it’s nice to know should you want to
give it a fang. Honda has a long history in motor sport, whether it’s on two wheels or four.

Honda CR-V’s engine has a minimum of turbo lag. The transmission is always in the
correct ratio – which is hardly a surprise given that it has an infinite number of ‘gears’
between the lowest and highest ratios in the automatic.

If you’re not used to driving a continuously variable transmission you may initially not like
the way it operates. However, you will become accustomed to it and appreciate the added
performance and fuel saving it provides.

Fuel consumption on our 500-plus kilometres of testing was in the seven to eight litres per
hundred kilometres around town and in the suburbs. On the motorways it dropped to an
impressively low five to six litres per hundred.