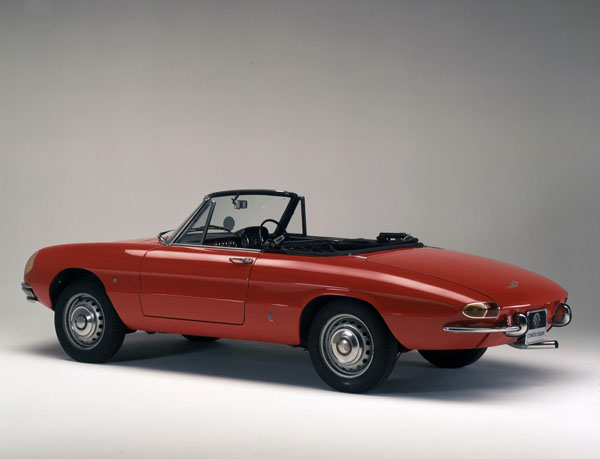 In the late 1920s the Alfa Romeo 6C 1750 established a strong reputation for the firm.
Hence, in 1967, when Alfa Romeo was making plans to introduce a new model to sell
alongside the Giulia 1600 they had the foresight to revive a great name. Whilst the engine
of this new car had a displacement closer to 1800 cc, it was only 29 cc greater than 1750,
so the decision was made by Alfa management to revive the old name and use it in all
sales promotion relating to this addition to their range.

The floor plan of the new 1750 was, in all respects, the same as the Giulia though its body
shape was quite different. The 1750 engine which initially powered this vehicle was an
extension of the now classic twin overhead camshaft unit of 1600 cc but it later developed
91 kW at 5500 rpm and had a torque of 186 Nm at 3000 rpm.

This output increase was achieved by increasing the bore and stroke of each cylinder to
80 x 88.5 mm. It was an inline four-cylinder engine mounted longitudinally in the front of
the car driving the rear wheels through a manual five-speed gearbox. The top speed of the
two-door coupe was listed as 183 km/h and it could accelerate from 0 to 96 km/h in 9.9
seconds.

The 1750 was available in three body styles: the Berlina, the GT Veloce and the Spider
Duetto. The latter two both had a top speed of around 10k m/h faster than the coupe, in
spite of having the same power and gearing, due to the better aerodynamics of the
sporting versions of this car.

The 1750GT coupe bodied by Bertone was a very good car to drive and soon became as
popular as the Giulia which it replaced. Because of its enduring shape and good
performance it became a great ‘all weather’ sports car which could even accommodate
four people although the back seat was a tight squeeze for two adults.

The pretty two-door Duetto 1750 was much sought after because of its appearance and
offered a most satisfying driving experience. The fact that its fuel consumption was very
light added further to its appeal.

The modest production volume of 4,017 examples of the 1750 for its introductory year of
1967 does not indicate the immediate popularity that this car enjoyed since over 42,000
cars were built in 1968 together with 60,000 Giulias and only 24 2600s in that year, lifting
Alfa Romeo’s total output of cars to over 100,000 vehicles in a single calendar year for the
first time.